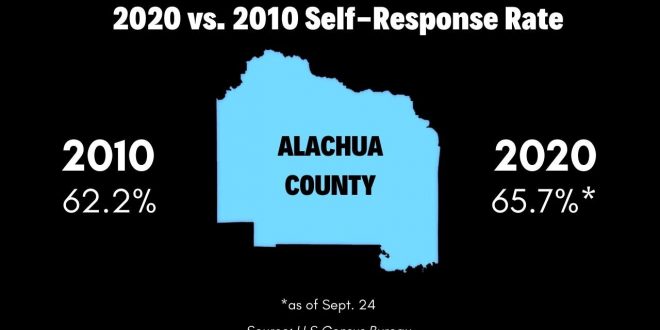 With the census counting effort concluding, Alachua County and Gainesville officials have continued to promote and encourage residents to fill out the census, in spite of the obstacles of COVID-19.

Sean McLendon, strategic initiatives manager for Alachua County, said the county is “faring better than many because there’s been a good integration with the Complete Count Team on getting the word out.”

Alachua County’s Complete Count Team, also known as a Complete Count Committee (CCC), is one of many teams set up nationwide to “help the Census Bureau get a complete count in 2020 through partnerships with local governments and community organizations.”

Alachua County lost about $390 million in federal funding in the past decade because of the 2010 census undercount, he said.

“For every person that, say, doesn’t take the census, that may cost us on average around $960 every year for the last census period,” McLendon said.

This year’s census count is important for Florida because the state is set to gain one to two additional representatives in the U.S. House of Representatives during redistricting, he said. The decennial total also influences other issues, including the $46 million that was awarded to Alachua County as part of the CARES Act.

The City of Gainesville and Alachua County partnered with the University of Florida’s Bateman Team to help get the word out in March before COVID-19 caused shutdowns.

Marilyn Stephens, the assistant regional census manager for the 2020 census for the Atlanta region, said that due to COVID-19, national efforts to promote the census changed.

There was no time for overthinking.

“I do like the response rate, under the circumstances, when other things became top of mind,” she said. “[The census] had to compete with people’s jobs changing, schools changing, you know, all of our social norms.”

Jessica Turner-Evans, the census coordinator for the City of Gainesville, said that despite social distancing efforts, the city has done a lot of marketing and online events to reach the community.

“I feel like we’ve done a relatively good job considering the obstacles,” she said.

“Hopefully, we will continue to see the programs flourish in our area, [which are] much needed for mental health and child care, necessary roadwork construction, small businesses and new businesses moving to our area, and the result of the population count, because it is contingent on the census data,” she said.

However, the final count is not over yet. There is over a month left to go, pending legal challenges.

“The community is doing well. But, we can always do better. For anyone that hasn’t taken the census yet, I would urge you to take 10 minutes [and] go to 2020census.gov to fill out your census,” McLendon said.

“It takes 10 minutes, and it will leave a legacy that will last a decade.”

Sarah is a reporter for WUFT News who can be reached by calling 352-392-6397 or emailing news@wuft.org.
Previous ‘An Isolated Incident’: Gainesville Fire Rescue Determined Cause Of School Bus Fire
Next Democrats Ask Full Court To Hear Fight Over How Florida Orders Candidates On Ballots

Gainesville residents who are experiencing delays or those with questions can reach the city's waste management company at (352) 334-2330. Missed collections can also be reported on the city’s website.