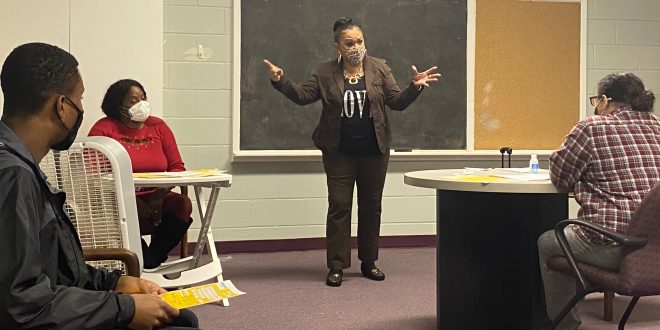 Transgender activist Natalia Dupree grew up mad. She was a feminine and misunderstood kid living in Gainesville and Archer in the 1980s, trying to find space to be herself.

Dupree, 48, of Brooker, always knew she was a woman, but didn’t have the right words to describe her womanhood, since she never saw transgender people growing up. She felt stifled at home and received harsh punishment from her parents.

“I wish I could have been able to express myself,” Dupree, a former Wendy’s restaurant manager and now a client advocate at St. Francis House in Gainesville, said recently. “That would have made a lot of things better.”

Now, over 30 years later and amid a pandemic, Dupree has found a space for her organization, Unspoken Treasure Society, inside of a former Highlands Presbyterian Community Church on Northeast 16th Avenue in Gainesville.

Unspoken Treasure serves transgender and gender non-conforming people of all ages and allows them to express themselves in a safe space. The new space better allows the society to safely plan local events like the annual one occurring Friday: Transgender Day of Remembrance.

Each year on Nov. 20, groups like Unspoken Treasure honor transgender people killed in acts of anti-transgender violence. The society along with TranQuility, the Pride Community Center and other local LGBTQ groups will hold a vigil at 7 p.m. at Bo Diddley Plaza.

According to the Movement Advancement Project, 886,000 Floridians age 13 or older are LGBT and at least 100,000 of them are transgender. These numbers are often self-reported, and so other people identify as transgender, but they don’t report it for fear of harassment and assault.

They know of transgender people such as Yunieski Carey Herrera, 39, who was stabbed to death in Miami, becoming the 37th reported case of a transgender or gender non-conforming person killed in the U.S. this year. Some dispute this number, saying such cases are underreported.

According to the American Foundation for Suicide Prevention, over 40 percent of transgender people have attempted suicide, nearly 10 times the national average overall.

Two years ago, Dupree founded Unspoken Treasure and was using space inside the Pride Community Center on Northwest 13th Street. With the support of Terry Fleming, the center’s former president who died in April, Dupree provided outreach to area LGBTQ people.

“Terry Fleming was very instrumental in my first year and a half before he passed,” she said. “He gave me the space, free of charge.”

Dupree said, however, the society had to find somewhere else to meet, in part because many local “big organizations” paused their operations or shut down because of the pandemic. She worried about those people who still needed mental health services and community support.

“If everyone’s closing their doors,” she asked, “who’s going to be there for those people who are suicidal, lonely and depressed with nowhere to call and nowhere to go?”

She added: “Those people need somebody, and I know that because I’ve been there. I don’t want to let anybody go through the cracks.”

Among the most vital services it offers is free HIV testing.

“I’m here hoping they will hear something that’s going to save their life,” Mercado said, referring to her outreach audience. “You’ve got to be in a zone that’s going to make people uncomfortable so they can hear you.”

KatieJo Collins, 37, of High Springs, was introduced to Unspoken Treasure through TranQuility.

Collins is genderqueer and their teenage son is transgender, leading them to seek out community from TranQuility. But with the coronavirus causing a lot of groups to shut down, Collins and their son no longer had meetings to attend.

In August, Dupree reached out to Collins through other community organizers and invited them to Unspoken Treasure’s new space. Since then, Collins has helped with fundraising and community outreach. Having their own space allows them to better organize and do so.

Just having a one-hour event can take 30 or 40 hours to plan, taking “money out of our own pockets,” and having to ask for donations so we could make this stuff happen,” Collins said.

“When you create a space where we can come together and do all of that planning, that’s how you can make that stuff happen,” they said.

“It’s still in the works, we’re looking for buildings, but our budget isn’t there yet,” Dupree said. “I’m networking and praying that I come across the right connection that can help me move forward with my dream.”

Karli is a reporter for WUFT News who can be reached by calling 352-392-6397 or emailing news@wuft.org.
Previous Critics Outraged By Marion County School Psychologist Saying Addiction Is A Choice
Next The Point, Nov. 20, 2020: Florida Reports Over 9,000 Daily New Coronavirus Cases For Third Time This Week