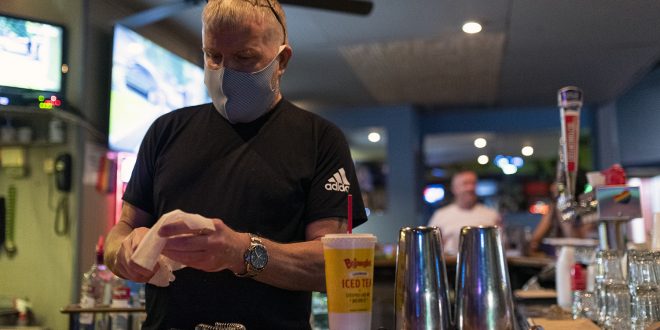 Kenny Scott, 57, sanitizes a group of pens during his Thursday, Oct. 8 shift at the University Club at 18 E University Ave. An employee since it first opened 30 years ago, Scott said working at the club is like a big support group. Scott said he can sleep better at night knowing his employers are taking the necessary measurements to protect him and the other employees. (Victoria Vargas/WUFT News)

The University Club will be transforming its space from a beloved nightclub where you can dance for hours to an entertainment venue featuring returning and new talent.

The historic bar is committed to adapting to ensure the safety of its guests and hopes to have these changes completed by the end of the year, said show director Jay Brooks, also known as drag performer Kelly Kelly.

The club hopes that by adding more talent and shows per night, it will encourage people to stay for a show and drink rather than dance and party in large groups, said Kelly.

The University Club celebrated its 30th anniversary this year. Kenny Scott, 57, has been an employee since it first opened. With the exception of Spectrum Disco in the 1980s, a popular club located at what is now High Dive, University Club has been the only LGBTQ nightlife space in Gainesville.

Members of the LGTBQ community are vocal about the importance of nightlife. Places like University Club were once the only spots gay people could truly be themselves, Kelly said. Often outcast by their own loved ones because of their gender or sexual identity, people find a new, loving community in these spaces.

“You can go to any club to party, but you go to a gay club to call a family,” Kelly said. “We can’t just wake up, walk outside and say, ‘Let’s go to this super comfortable place right now where I can be around people that are like me, that think like me.’ You don’t get that unless you’re in a gay club.”

Employees of the University Club have formed their own family over the years; It’s one that welcomes people of all identities and expressions.

Daryl Marshall, 33, said he was seeking a gay bar to go to when he moved to Gainesville for college about five years ago. He frequented the club as a patron and eventually became a bartender.

When Alachua County enacted in March its stay-at-home order, nonessential businesses like the University Club closed. It stayed closed for most of the summer. The University Club briefly re-opened for about two weeks in June, but closed again when cases spiked, Kelly said.

Not being able to work was like losing a piece of his family, Marshall said.

The University Club management was able to pay its employees through a Payment Protection Program through the Small Business Administration for around three pay periods, Scott said.

While management knew it could handle the first couple of months without receiving income, Kelly Kelly said she established a GoFundMe page in late June called “The University Club Family Fund” to cover the club’s rent and other costs, as well as to pay its employees. In just under two weeks, the page reached 90% of its $10,000 goal.

“The community just showed out and really rallied behind us,” Kelly said.

Scott said it is important for places like the University Club to be open because it shows that someone has their back. For Scott, the financial impact isn’t the hardship throughout this pandemic. The loss of connection is.

Others in the service and entertainment industry agree. Eveleena Fults, also known as Ivy Les Vixens, is the leader of the Les Vixens burlesque troupe. A frequent performer at the University Club, Fults said being able to entertain for her community helps people feel more connected to one another. Entertainment even in the LGBTQ community is predominantly geared toward men, Fults said.

“Someone struggling with their identity can come see a show and see these powerful queer women doing their thing and owning it and being out and proud,” she said. “Just to be an out and proud lesbian, in every space, and representing our community wherever I go and whichever stage I’m one. For me it’s a responsibility, but it’s also kind of my favorite thing.”

When venues closed, entertainers like Fults and Kelly Kelly transitioned to digital shows to maintain their livelihood.

Performing online from home doesn’t compare to the glitter, bright lights and encouraging fans the University Club provides. Fults said she went from performing upwards of 15 shows a month to nothing. “Going digital sucks my soul out a little bit,” Fults said.

These performers took the pandemic as a learning experience to try something new. Now they must know how to set up digital platforms, stream and wear protective gear while still serving up signature looks, Kelly said.

We have entered a digital tipping era, Kelly said. The drag and burlesque shows at the University Club are offered at no additional cost to visitors, so performers heavily rely on tips from the audience. This entertainment aspect is popular throughout LGBTQ clubs throughout the country, making these spaces that much more special.

Digital tipping through apps like Venmo and Cash App lets people who are still hesitant to go out contribute to their favorite entertainers as well as people in person who are using cash less often, Kelly said.

Performers must also know all the rules and regulations that are being implemented to maintain safety and hygiene.

These regulations are something the University Club is strictly following, Scott said.

Hand sanitizer bottles are placed throughout the club and visitors are encouraged to wash their hands every 30 minutes in the bathrooms available both upstairs and downstairs. Masks are required for entry but may be removed to drink beverages. Scott said he is using more plastic cups when serving drinks to minimize the spread of germs. He also makes sure to frequently sanitize everything throughout his shift.

Scott is trying not to fret too much about the future. “It’s kind of like a yo-yo,” watching the COVID-19 case numbers go up and down, he said. He said he does fear the University Club may have to close again if there is a spike in cases. For now, he will continue to follow the strict guidelines the club has put in place to protect not only its customers, but more importantly, its employees.

Victoria is a reporter for WUFT News who can be reached by calling 352-392-6397 or emailing news@wuft.org.
Previous Florida Health Officials Question COVID-19 Death Data
Next The Point, Oct. 22, 2020: Those Threatening Emails To Florida Voters? Iranians Are To Blame, U.S. Intelligence Chief Says