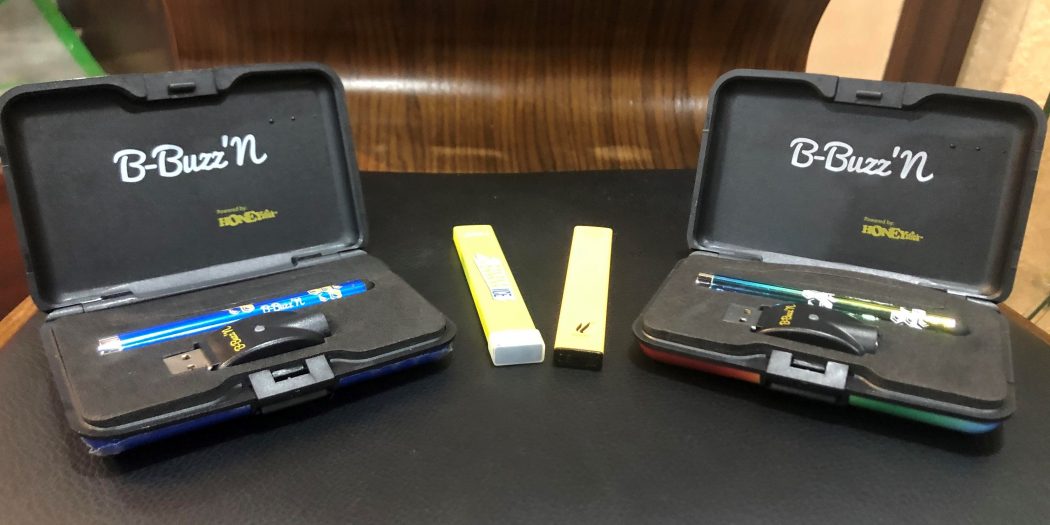 Pictured are two B Buzz'ns, a vape pen battery that can vaporize liquid nicotine for inhalation, and two banana-flavored disposable e-cigarettes. Products like these are subject to the county’s tobacco product age restrictions.

Numerous Alachua County smoke shops will be going to court for selling tobacco products to people younger than 21.

Thirteen smoke shops have sold tobacco products to underage people since enforcement of the county’s age restriction picked up in January, according to county documents. The owners of the shops will appear before a special magistrate, or a judge who oversees small civil infractions like parking tickets, on Nov. 19, said Missy Daniels, Alachua County’s director of growth management.

Gov. Ron DeSantis vetoed a bill on Sept. 8 that would have enforced a federal bill that limited tobacco sales to people over the age of 21. Alachua County was unaffected by the decision because the county commission prohibited the sale of tobacco products, including e-cigarettes and vapes, to those under 21 in 2019.

About 250 to 300 stores are registered to sell tobacco in the county, Daniels said. Based on her estimate, 4.3 to 5.2% of all county tobacco shops have violated the order.

One of the stores on the list was Modern Age Tobacco and Gifts, a Gainesville-based tobacco shop with two locations: 1122 W. University Ave. and 2320 SW 34th St. Daniels said in February that two complaints were filed against Modern Age, with one complaint for each location.

The stores that violated the order were caught by Information Systems and Network Corporation, an inspection company contracted by the county, Daniels said.

ISN sends undercover employees who are younger than 21 to attempt to buy tobacco products at smoke shops across the county, Daniels said. If the ISN employee is able to purchase a product, ISN reports the violation to the county, which compiles evidence and sends the store to the magistrate.

“We need ISN because we do not employ code enforcement officers that are younger than 21,” Daniels said.

The county pays for its contract with ISN and other code enforcement costs by charging smoke shops for a $230 tobacco license fee once a year, Daniels said.

The Grab Bag Co., a vape shop located at 6450 SW Archer Rd., follows the county’s age restrictions, said manager J.J. Harper.  While the store gets regular business, he said the new age restriction and the COVID-19 pandemic reduced foot traffic by almost half. The store can also only allow five people in at a time to adhere to social distancing requirements because the store is small, he added.

“A lot of people think we are closed and locked down,” Harper said.

The county implemented the age restriction to reduce the number of people under 18 who are able to access tobacco products, said Ryan McGuire, a senior health policy specialist at the county health department.

McGuire cited a 2014 report by the U.S. Department of Health and Human Services that found that 90% of smokers started smoking before the age of 18. With the age limit set at 18, it is easier for older high school students to buy tobacco products and give them to younger students at school, he said.

About 480,000 people in the U.S. die from smoking-related illness each year, according to the Centers for Disease Control and Prevention. On average, smokers live 10 years less than non-smokers, according to a New England Journal of Medicine study.

To Harper, schools should play a bigger role in keeping tobacco products out of the classroom.
He also added that parents could buy tobacco products for their children without the store’s knowledge.

“We could all give the schools more money to get better security,” Harper said.

Tristan is a reporter for WUFT News who can be reached by emailing news@wuft.org.
Previous The Point, Oct. 13, 2020: Hear From The Two Candidates Running To Win Florida House District 21
Next October 13, 2020: Morning News In 90