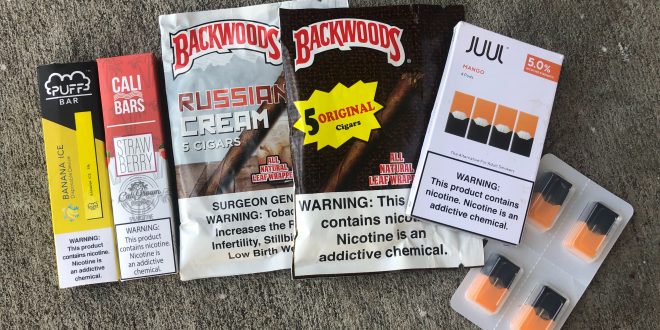 Pictured are mango nicotine cartridges for Juul, a brand of e-cigarette and Backwoods, cigars made from tobacco leaves. Cali Bars and Puff Bars are disposable e-cigarettes. These are among the products sold in smoke shops and included in Alachua County's ordinance. (Brenna DeLong/WUFT News)

Alachua County raised the legal tobacco age from 18 to 21 last October, but full enforcement has been slow to get under way, raising questions about whether some shops have continued to sell to underage buyers.

The ordinance covers electronic cigarettes, liquid nicotine and all other tobacco-containing products. Missy Daniels, the director of the county’s growth management department, which includes the code enforcement division, said in-shop inspections are finally starting this month.

The three-month delay was owed, she said, to the department’s efforts to ensure that all tobacco sellers had obtained their $230 licenses and posted a notice of the new law at their store entrances.

She said that, since October, county code officers have checked to see that every store in Gainesville is licensed and has a notice of the new law posted at the entrance. Owners who have shops at different locations need a license for each store location.

According to Daniels, all tobacco-selling shops in Alachua County, aside from those within the two cities that opted out in 2019, have now complied with this rule.

Still, she said two complaints have been filed against one Gainesville business, Modern Age Tobacco and Gifts, with one complaint for each of its two locations, 1122 W. University Ave. and 2320 SW 34th St.

According to Daniels, one complaint stated that a smoke shop neighboring the West University Avenue location refused to sell tobacco to underage buyers, who then purchased the products from Modern Age, with the buyer keeping receipts to prove it.

Reached by phone for comment at the West University Avenue store, a man who identified himself as the president of Modern Age but who would not provide his name, said the store had been there for 40 years and he did not care whether a person under age 21 attempted to buy tobacco.

That complaint against Modern Age was called into the codes office, Daniels said. Then, code enforcement sent it to the county’s inspection contractor to put at the top of the inspection list.

“I’m not sure when it will be inspected or if it has,” Daniels said. “We will get it on a list from the contractor when they do inspect along with the others inspected during that time frame.”

Anyone may report a store through the county’s website. As of Feb. 6, the county had not received a complaint about any other smoke shops.

Daniels said a reported shop would become the department’s top priority for inspections.

Daniels said license sales will fund the inspections, each of which will cost the county $117.42. She could provide no estimate of how much the enforcement effort will cost annually.

Although every retailer in participating cities is now licensed, Daniels said close to 100 were not at the time the law went into effect because of a backlog in the county’s application review process.

“We had a lot of people who didn’t get licensed by the due date,” she said. “It’s not difficult to get one, but we only had so many people going through the applications, which made it take a little longer.”

Newberry and High Springs were the two municipalities that opted out of the new Alachua County mandate. As a part of the law, each city’s elected leaders had the option to hold meetings and decide whether or not to opt out.

At the end of 2019, though, President Donald Trump signed a law raising the national tobacco-buying age limit. This doesn’t apply to tobacco possession. The federal law won’t be enforced until each state drafts and passes its own enacting legislation. In Florida, the Senate bill needs one more hearing before advancing to the full chamber, while the House version hasn’t yet had a hearing — as was the case last year. Gov. Ron DeSantis has not signaled his interest in signing the new age restriction.

There are additional complexities to the pending legislation:

If the Florida Senate amends its definition to include vape products, Alachua County and the cities that didn’t opt out will be unaffected. Newberry and High Springs, Betta said, could be affected depending on the extent they aren’t complying.

If the state’s definition isn’t amended to include vape products, Alachua County will remain unaffected, but Newberry and High Springs won’t be prohibited from selling vape products to those under 21 years old.

“We’ll know if the (county ordinance) is effective by looking at how the data plays out over the next few years,” Daniels said. “I think the rates of underage tobacco purchases will eventually plateau, and then decrease.”

Akash Kalra, 19, a UF student from Fort Myers who is studying mechanical engineering, has been using tobacco products for four years. He said the law is not always effective against high school or college students who can use false ID cards or have an older friend purchase the product.