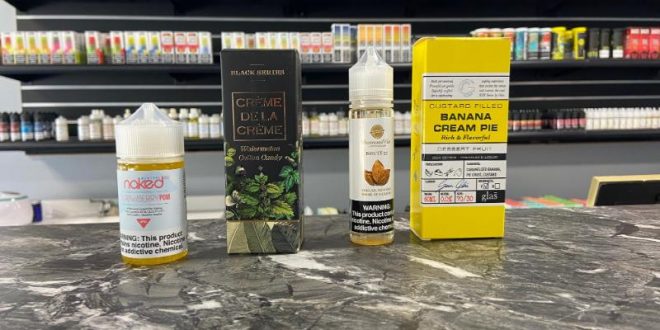 Vape shop owners hailed DeSantis’ veto, calling it a critical step in reducing the use of tobacco cigarettes. (News Service of Florida)

TALLAHASSEE — Saying the proposal would have driven Floridians “to the hazardous black market,” Gov. Ron DeSantis late Tuesday vetoed a measure that would have banned the sale of nearly all flavored electronic-cigarette products and raised the state’s smoking age from 18 to 21.

Attorney General Ashley Moody, Senate President Bill Galvano and health organizations such as the American Cancer Society and the American Lung Association pushed the legislation (SB 810), which largely would have brought Florida into compliance with federal laws aimed at curbing teen vaping.

The proposal was one of the last measures approved by lawmakers during the 2020 legislative session that ended in March, following a tug-of-war over the measure between House and Senate leaders.

In Tuesday’s veto message, DeSantis called raising the age to 21 to purchase tobacco products in Florida “superfluous,” since it is already mandated in federal law.

The governor noted that “hundreds of thousands of Floridians” rely on tobacco-free vaping flavors “as a reduced-risk alternative to cigarettes, which are more dangerous,” a message echoed by thousands of proprietors of e-cigarette shops who urged DeSantis to veto the bill.

“This legislation would almost assuredly lead more people to resume smoking cigarettes, and it would drive others to the hazardous black market,” DeSantis wrote in a veto letter released by his office about 9 p.m. Tuesday. “The latter consequence is especially significant because the much-publicized cases of lung injury associated with vaping in recent years have been traced to illegal, or black market, vape cartridges containing THC, not to the types of legal vaping products that this bill would abolish.”

Moody, who made the legislation known as “Tobacco 21” one of her chief legislative priorities this year, called the governor’s action disappointing.

“The United States and Florida surgeons general have declared vaping to be an epidemic. As the attorney general and a mother, I will continue to advocate for legislation and in our courts to protect Florida’s children,” she said in a prepared statement.

But vape shop owners hailed DeSantis’ veto, calling it a critical step in reducing the use of tobacco cigarettes.

George Conley, president of the American Vaping Association, said the bill would have had a devastating effect on the state’s economy.

“When legislators voted for this bill, few had any idea that they were actually voting to shut down small businesses in their districts. This would have been disastrous not only for the 5,000-plus vapor-related jobs in Florida, but for the 800,000-plus adult vapers in Florida as well,” Conley said in a prepared statement.

The Republican governor’s election-year veto was announced just hours after he appeared with President Donald Trump in Jupiter, where the presidential motorcade passed a number of people carrying signs declaring, “I VAPE, I VOTE.” DeSantis is a close ally of Trump, whose re-election bid could hinge in part on Florida and its 29 electoral votes.

DeSantis’ veto, however, was a snub to Moody and Galvano, a Bradenton Republican whose two-year term as Senate leader concludes after the November elections.

The bill was a top priority for Galvano, who said in a statement Wednesday that he agrees with the governor that vaping can be a “vital tool” in smoking cessation.

“My concern has been that vaping quickly ballooned into a huge industry before health care experts really had a chance to study the long-term impacts of using vaping devices, particularly with regard to flavored products,” Galvano said in a prepared statement, noting that “vaping has become pervasive on college and university campuses and even K-12 schools.”

The legislation “required that we take a pause” on flavored vaping liquids “only until the FDA (Food and Drug Administration) could appropriately analyze these products,” Galvano said.

“This is obviously an issue where we have a similar concern, but a difference of opinion on the solution. The governor has the final say on all legislation. I respect his authority and reasoning. I also appreciate the time he spent reviewing this issue,” he said.

A coalition of health care organizations fought fiercely for the proposal during this year’s legislative session, arguing that the state should regulate e-cigarettes as tobacco products such as cigarettes, snuff and dip.

According to Tobacco Free Florida, more than 25 percent of Florida high-school students used e-cigarettes in 2019. The Centers for Disease Control and Prevention recently released a report showing that half of high-school students nationwide have vaped, and nearly a third of youth e-cigarette users report vaping at least 20 days per month.

The health-care groups vowed to press on with legislative efforts to impose restrictions on the largely unregulated vaping industry.

“Our organizations look forward to working with lawmakers in the coming session to ensure our state enacts the evidence-based policies that will adequately address the alarming tobacco use rates among our youth and safeguard our kids from the tobacco industry’s growing pressures for generations to come,” groups including the American Cancer Society Action Network, American Heart Association, and the Campaign for Tobacco-Free kids said.

The 2020 legislation did not go far enough “to address the rates of youth tobacco use in Florida,” American Lung Association director of advocacy Ashley Lyerly said in a statement.

Lyerly’s organization is asking lawmakers to provide more funding for education and prevention efforts focused on e-cigarettes, “strong regulation and licensing of all tobacco retailers, including electronic cigarette retailers,” and the creation of a tax on vaping products, among other things.

The health care groups urged lawmakers to initiate regulations cracking down on sales of e-cigarettes and vaping products to minors.

“To truly restrict youth access to all tobacco products, Florida must hold non-compliant retailers accountable by assessing graduated fines coupled with license suspension and revocation for repeat violators who sell illegally to kids, as well as regulate all tobacco products, including e-cigarettes, in the same manner,” the coalition of health care groups said.

The bill “would have had devastating public health and economic impacts for the state,” Tony Abboud, executive director of the Vapor Technology Association, said in a news release.