The Alachua County charter amendment that would create a county growth management area has caused quite a bit of controversy and even led to a lawsuit against the county.

The 2020 general election ballot includes six charter amendment proposals, four of which were placed on the ballot by the Alachua County Charter Review Commission.

If the county growth management area amendment is approved, any development within the area would be exclusively governed by the county’s land development regulations, even if a parcel of land is later annexed into the boundaries of a city. 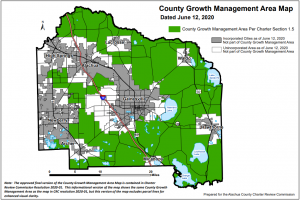 The area was designed as a compromise, leaving some room around each city for the city boundaries to later expand without being under the county’s management area. However, if the city did annex land that is part of the county growth management area, it would not have use control over that land.

If passed, this amendment would also require there to be a supermajority vote to remove property from the growth management area.

This potential limitation on future development projects of local municipalities by the county is at the root of the disagreement.

Gainesville already expressed its support of this amendment in a city commission meeting on Sept. 17, where city commissioner Adrian Hayes-Santos introduced the motion to support this charter amendment, which passed with a vote of six-zero.

“The main reason is it protects the rural farm areas and environmentally sensitive areas in our county that have not been developed,” Hayes-Santos said on the reasons for support.

This amendment creates something similar to a belt around areas including Gainesville, but there is still a decent amount of room for the cities to expand if they wish to, he said.

However, to combat this proposed county charter amendment, some local municipalities have taken action to show their disagreement, led by the city of Newberry.

Not only has the city of Newberry passed a resolution opposing the amendment, but the city staff have talked to other municipalities about the resolution, according to Maltby.

Now, High Springs and Micanopy have also put into place resolutions against the amendment, and Archer will be discussing the creation of a similar resolution, Maltby said.

“I just want to report back to the city on the impact that I think the resolution in Newberry has had with some of the other fellow municipalities,” Maltby said.

Linda Jones, a city commissioner for High Springs, said the city passed a resolution on Sept. 10, which is similar to the resolutions passed by other municipalities against the charter amendment.

Jones said High Springs decided to pass this resolution because if put into place, this charter amendment will affect not only businesses but also the residents of the city.

According to Jones, the main issues that High Springs has with the charter amendment is that it could discourage businesses from wanting to operate or potential residents from wanting to live in the city because they will not only have to deal with the city, but also the county.

“We think our elected officials can handle the business of High Springs better than the county can,” said Jones.

One of the local municipalities has chosen to take this issue even further with a lawsuit against Alachua County.

On Sept. 21, the city of Alachua announced it is suing Alachua County over the proposed county growth management area amendment.

The city of Alachua argues the amendment’s title and summary on the 2020 general election ballot are “misleading, contain improper political rhetoric, and fail to adequately inform the voters of the chief purposes and material components of the proposed Charter Amendment.”

The unclear language makes it impossible for voters to be able to know how they should vote on this amendment, according to the press release.

With this lawsuit, the city of Alachua hopes the court will remove the amendment from the ballot on the grounds that the misleading and unclear language violates Florida law, and thus prevent the county growth management area from being created.

Mike DaRoza, the communications and executive project manager for the city of Alachua, said the city is unable to comment at this time. “As was stated in the press release, ‘due to the fact that this matter is currently before the Court, the City will not be making further statements regarding this case.”’

In a Facebook post on Sept. 28, Jordan Marlowe, the mayor of Newberry announced that the city is also filing suit as a result of the “egregious ballot initiative that would rob every municipality of its Home Rule inside our County.”

“This is a sad moment for me. Although I believe we should pursue our legal rights, and I agree with the action the Commission is taking, it is always disappointing when we can’t work with our County government to find a resolution. Every city has asked the BOCC not to go down this road. They have ignored us all,” Marlowe said.

Ashlyn is a reporter for WUFT News who can be reached by calling 352-392-6397 or emailing news@wuft.org.
Previous When, Where And How You Can Vote In These North Central Florida Counties
Next The Point, Oct. 14, 2020: Here’s Our Guide To Voting Early, By Mail Or On Election Day In Your County