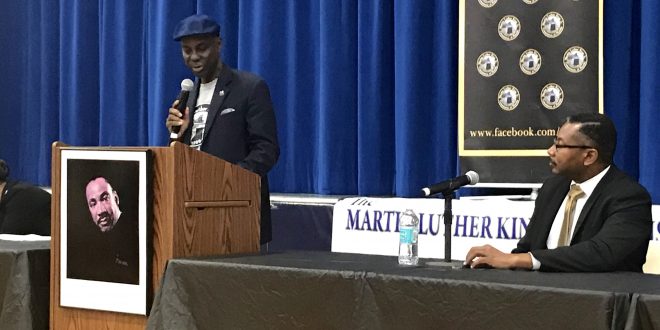 Matt Bowman has seen the trend across the United States.

Racial discrimination remains in the marijuana industry, with few minority-owned dispensaries opening in any of the states that have legalized the drug, according to the 48-year-old hemp farmer and entrepreneur from Walterboro, South Carolina.

“Florida has a chance to get it right,” Bowman said Wednesday night.

Bowman was one of six panelists to discuss the likelihood of recreational marijuana’s legalization in the decade ahead and its potential impact on Florida’s African American communities at a town hall symposium at the Martin Luther King Jr. Multi-Purpose Center in Gainesville.

The panelists discussed the costs and benefits that the marijuana industry could bring to African American communities. They also talked about the possibility of minorities jailed for possession getting their records expunged and entering the industry with a clean slate.

So, if marijuana were legalized in Florida, what would happen?

“If marijuana is approved for recreational use in the state of Florida, it will become the new economy,” Commission President Rodney Long said.

Bowman said the marijuana industry has the potential to become a booming industry. He said the young people need to get into the business when it’s legalized.

“This will be a billion-dollar industry,” Bowman said. “Cannabis is coming.”

Holly Bell, the director of cannabis for the Florida Department of Agriculture and Consumer Services, said hemp alone has 25,000 different uses, and it provides young people with an opportunity to get at the forefront of the booming industry.

Patricia Green-Powell, the interim executive director for the Medical Marijuana Education and Research Institute at Florida A&M University, said medical marijuana has also been known to reduce chronic pain such as arthritis and endometriosis. It can also help with mental illnesses like anxiety and PTSD.

Bowman, a veteran of the U.S. Navy, said veterans returning from Iraq and Afghanistan have experienced post-traumatic stress disorder and anxiety, and marijuana can provide relief for them.

“Too often, our community gets in on the tail end,” Bowman said. “We suffered for 13 years into the war on drugs, and when it’s legalized young men like these are not able to participate.”

Daryl Coober, who lives in the Fletcher Mills neighborhood west of Gainesville city limits, said he finds himself in the middle on the issue of legalizing recreational marijuana. Coober, 53, said he sees the agricultural opportunity in it but is torn due to its moral aspect and potential negative impacts.

Florida voters, however, won’t be able to vote on this issue in 2020. The Make it Legal Florida political committee stopped its process of getting recreational marijuana on the 2020 ballot Jan. 11, the Tampa Bay Times reported.

Make it Legal Florida gathered 700,000 signatures on its petition to get the initiative on the ballot for a vote. However, only 295,072 of them were verified by the state, which is only 38% of the amount needed by the Feb. 1 deadline. Make it Legal Florida, according to The Times, backed out because there wasn’t enough time.

The signed petition is valid for another two years, so there may be hope for Florida voters to get recreational marijuana on the ballot in 2022 through another initiative. An initiative is a petition signed by a certain number of registered voters that can force a state government to enact a law or vote on it.

Currently, Florida is one of 30 states in the U.S. in which medical marijuana is legal, according to Business Insider. There are 10 states in which it is legal for recreational use: California, Oregon, Washington, Colorado, Nevada, Michigan, Illinois, Vermont, Massachusetts and Maine.

Illinois is the most recent state to legalize recreational marijuana. Its new law allows for wiping away “low-level convictions” and arrests for possession. Hundreds of thousands of people could have their records expunged if they possessed 30 grams or less, according to The Chicago Tribune.

Stacy Scott, the elected public defender for the 8th Judicial Circuit, said policymakers have to take the next step in dealing with those who are facing lifelong consequences for something that’s now legal. Scott said the community would need to advocate for automatic expungement for those convicted so they don’t have to spend money on a lawyer and go to court.