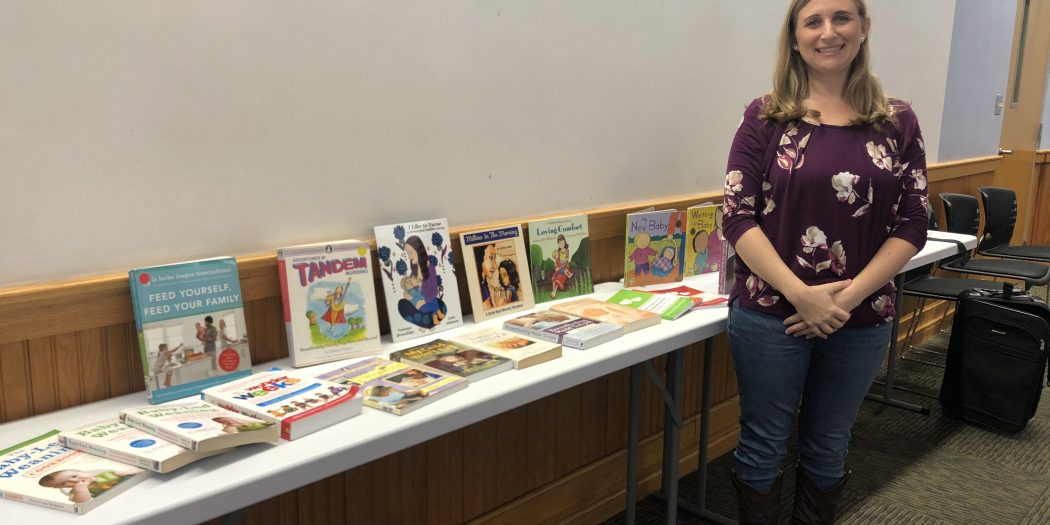 Justine Hirsch is one of three La Leche League Gainesville leaders. Nursing and children’s books are set out during meetings for moms to rent. (Jocelyn Nieves/WUFT News)

Breastfeeding support groups like La Leche League continue to encourage women to continue breastfeeding, and their presence has again grown in the past two years in Gainesville, too.

According to the Centers for Disease Control and Prevention, over 81% of mothers breastfeed after birth; however, many stop because they do not have the support and encouragement needed to continue.

Lizette Nieves (no relation to the author) became a member of La Leche League in 2015 in New Jersey. When she moved to Gainesville, she immediately found a local league through the International La Leche League page.

“When I found out there was a group here in Gainesville, I was thrilled,” Nieves said. “That’s one of the first things that I did when I moved here.”

Breastfeeding numbers in Florida have shown a steady increase during the past decade.

“I worked for like two months getting everybody excited to join this group and getting to know each other online, and then we hosted our first meeting,” Hirsch said.

During La Leche League meetings, members and leaders speak on different subjects, such as overcoming challenges, to allow moms to relate, support and give advice to one another.

“What I don’t want to see, and what breaks my heart, is when moms have trouble with breastfeeding or don’t breastfeed as long as they want because they weren’t supported or given the right information,” Hirsch said.

The CDC mentions community support is what many moms need to continue breastfeeding. Nieves said the La Leche League breastfeeding community has had a strong impact on her relationship with her two sons.

“Breastfeeding has been our constant. I’m the thing they know. It starts as what they eat, but then there’s so much more that grows from it,” Nieves said. “I’m their emotional support boob.”

Yashibel Lopez, a member of La Leche League and ROSE, was not planning on breastfeeding, but after joining La Leche League in New York with her first child, that changed.

“In this setting, you find so many other moms who have kind of the same ideas and the same train of thought and the same goals for their babies,” Lopez said. “You come to a place where you know all the moms are on the same path, ‘Now, who can I connect with?’”

Heather Hartman-Johnson is also a nursing mom and member of La Leche League and said she joined the group to be apart of a “moms-supporting-moms community.”

“I’ve made some of my best friends here in La Leche League at the meetings,” Hartman-Johnson said. “It’s really been a beautiful gift for us.”

La Leche League meets at 10 a.m. the second Saturday and fourth Wednesday of every month. Meetings are free with no registration necessary.

The Florida Department of Health has created a breastfeeding resource list for North Central Florida.