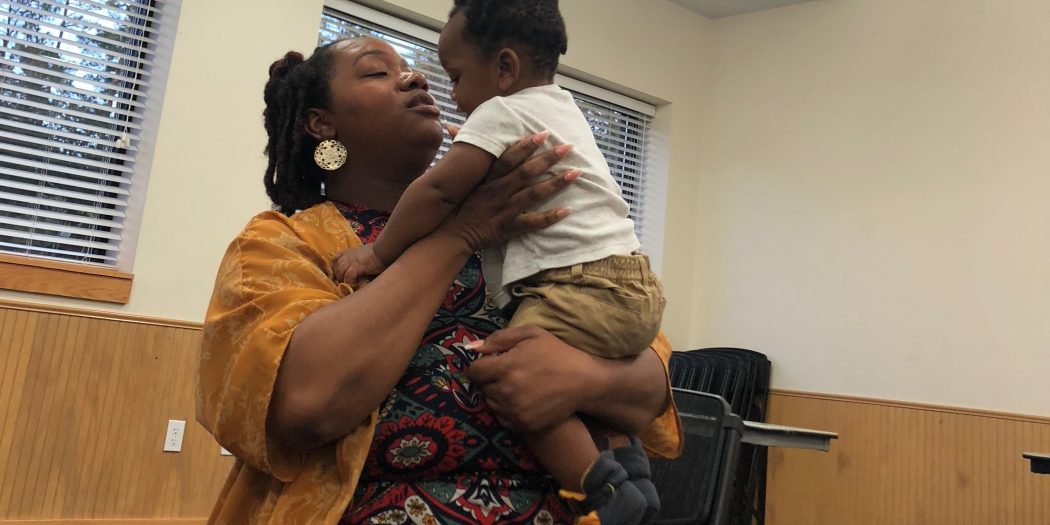 Tiffanie Stallion, a nursing mom in Gainesville, is one of the organizers for ROSE Breastfeeding Club in Gainesville. (Jocelyn Nieves/WUFT News)

The Georgia-based Reaching Our Sisters Everywhere Breastfeeding Club now has a presence in Gainesville.

Kayla Smith, a nursing mom who is new to Gainesville, attended her third meeting on Tuesday.

“I just wanted to meet people in the area, get out a little bit and share my nursing story with other moms in the area,” Smith said.

Kiara Hall, one of 13 organizers and a nursing mom, said she decided to volunteer to be an organizer of the ROSE Breastfeeding Club after attending ROSE’s two-day seminar. Hall found out about the seminar through a Facebook post by Mary Ryngaert, a pediatric nurse practitioner at UF Health Shands Hospital.

“It was like two full days of education, and I loved it,” Hall said. “I decided to volunteer and help bring awareness in Gainesville.”

Ryngaert brought ROSE to the area through a grant, according to Hall.

“Myself, along with about 12 other ladies all came to that training, and now we take turns leading the group,” Hall said. “It’s a whole group of us, and we call ourselves ‘The Gainesville Community Transformers.’”

The ROSE club allows women in the area to share their breastfeeding experiences and concerns with other nursing mothers.

“My goal was definitely to meet some amazing moms, so that’s been accomplished,” Smith said, “but, also, it’s a community to help encourage moms to continue breastfeeding.”

At the club’s meeting Tuesday, the moms were able to connect and share their experiences with each other in a comfortable setting.

Hall mentioned she has already seen an impact on the women with whom she has connected. She said has seen moms who were not nursing their babies and only pumping, but after coming to a meeting, the moms were able to get their babies to latch.

“They text and are like, ‘Oh my gosh I’m nursing now; thank you so much,’ so I think it’s gonna give moms confidence who weren’t able to breastfeed,” Hall said.

Meetings aim to cover the importance of breastfeeding, overcoming challenges and providing techniques for breastfeeding.

Smith said being part of the ROSE club has been beneficial. Her takeaway has been that each member comes from different walks of life, but each sees the importance of breastfeeding to their babies’ nutrition.

“I think it’s very important, and the fact that people are continuing to do it is amazing,” Smith said. “I wish more moms would breastfeed their children.”

Although the club is focused on the breastfeeding disparities among African American mothers, Hall said the group is open to all nursing moms in the area.

“The breastfeeding numbers are going up for everybody, but there’s a gap,” Hall said. “I would like to see the women of color start to breastfeed more and catch up so there’s not that disparity or that gap.”

Hall mentioned the number of African American women breastfeeding has gone up since ROSE. She said during The Big Latch On, a breastfeeding event across the nation in August, the attendance of women of color was greater than it had been before.

ROSE members meet on Tuesday at 5:30 p.m. at the Cone Park Branch library and Saturday at 11 a.m. at the Oaks Mall play area.

Jocelyn is a reporter for WUFT News who can be reached by calling 352-392-6397 or emailing news@wuft.org.
Previous Oct. 22, 2019: Afternoon News in 90
Next The Point, Oct. 23, 2019: Federal Investigation Into FIU Bridge Collapse Faults Public Safety Oversight