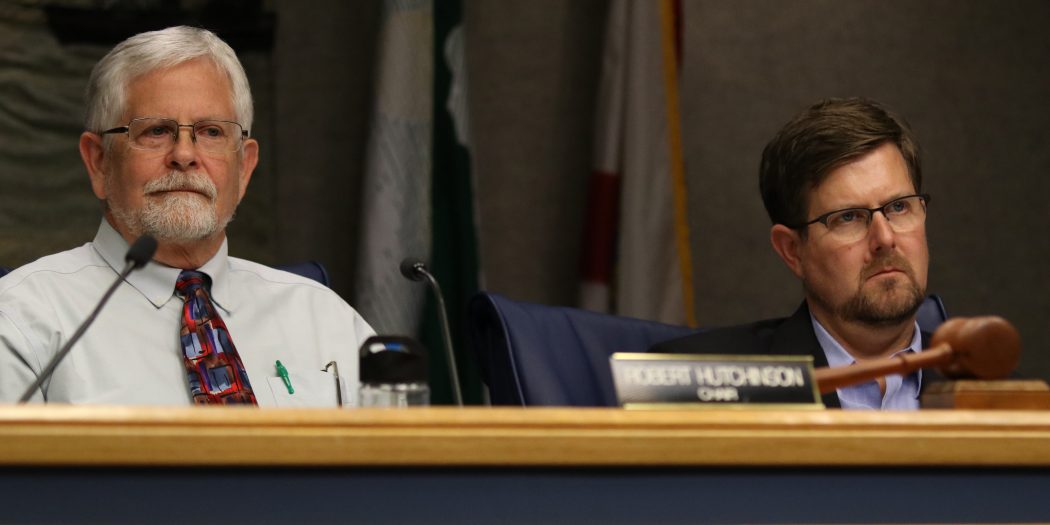 Alachua County Commissioner Robert "Hutch" Hutchinson and Gainesville Mayor Lauren Poe sat next to each other during Monday's joint meeting between the city and county commissions. (Zachariah Chou/WUFT News)

Over the course of five and a half hours on Monday afternoon, the Gainesville City Commission and Alachua County Commission discussed three consequential agenda items with far-reaching implications for the community.

Commissioners discussed a potential infrastructure surtax that could fund a wide array of projects, the potential donation of the old Alachua County Fairgrounds to the U.S. Army Reserve for use as an equipment concentration site and the proposed usage of “bed tax” funds to construct a sports event center in Celebration Pointe.

The meeting started off with Deputy County Manager James Harriott presenting on a full cent surtax that could generate around tens of millions of dollars a year for various infrastructure projects. Harriott’s presentation covered many topics, ranging from stormwater management to broadband development to conservation to improving public transit.

For the one percent sales tax come to fruition, the county has proposed a timeline that hopes to finalize ballot language between April and June for voter approval on the November 2o2o ballot. The current proposal anticipates funds to be collected starting in 2025 for 20 years, following the 2024 sunset of the Wild Spaces and Public Places half percent surtax.

The tax revenue could amount to $32 million per year, according to county spokesman Mark Sexton.

After a lengthy discussion on what could and couldn’t be funded with funds from the tax and what kinds of projects to prioritize, commissioners ultimately passed a motion to have city and county staff meet and develop a list of specific high priority projects the tax would fund, reach out to relevant stakeholders and report back to the commissions by the end of February.

Next, Alachua County Strategic Initiatives Manager Sean McLendon presented about discussions between the county and the U.S. Army Reserve over the potential development of the old fairgrounds into an “equipment concentration site” at 3100 NE 39th Ave.

McLendon says that this would be the first equipment concentration site in Florida and that the location would support the U.S. Army Reserve’s need to be prepared for disasters and conflicts.

The county is considering donating the property if ownership can be transferred back to the county for adaptive reuse once the Reserve is finished using the location.

According to the Alachua County Property Appraiser, the total adjusted value of the property in 2019 is $3,543,276. In terms of the economic benefit of the site, the county has “conservatively” estimated a $126 million impact over the next 30 years.

Commissioners expressed a variety of questions and concerns. Alachua County Commissioner Mike Byerly focused on the hiring and contracting process for the construction and mechanic jobs to come, concerned that they would ultimately go to individuals from outside the local community.

Alachua County Commissioner Charles “Chuck” Chestnut focused on the lack of attention the area surrounding the airport has received and how the site could be a boon economically for East Gainesville.

Gainesville Mayor Lauren Poe posed the question of whether some land could be retained by the county for economic development.

The county passed a three-part motion to direct county staff to provide the commission and community with information on the impact of similar Reserve sites, ask the Reserve to identify the skills and training needed to help the community successfully apply for the anticipated jobs and ask the Reserve to review the preliminary site plan and determine if one to three acres around the intersection of Waldo Road and Northeast 39th Avenue can be carved out for the county to keep and develop.

Finally, the commissions moved onto the topic of the tourist development tax, commonly known as the bed tax.

Senior Assistant County Attorney David Forziano presented, giving a detailed overview of the state regulations on how funds from the 5 percent tax that tourists pay can be used to improve tourism in the county. Alachua County Tourism Manager Jessica Hurov briefly presented on the bed tax as well, quantifying that each percent of bed tax would bring in an estimated $1.1 million during the next fiscal year and explaining past uses of the money in the county.

City commissioners then took the time to express their concerns with the proposed sports event center in Celebration Pointe, which would be funded in part by the bed tax.

“We were talking about potentially making a promise to East Gainesville about how this money would be spent and where it would go,” City Commissioner David Arreola said. “There wasn’t a whole lot of discussion about how that veered into a completely different direction.”

The county had originally paid an outside company to evaluate locations in East Gainesville for an event center that could drive economic development, but none of the proposed sites were deemed “favorable.” City commissioners have continued to voice their support for an event center in East Gainesville, while county leaders shifted their focus to Celebration Pointe as the potential location for the new site, commissioning a second study that was submitted to the county in September.

However, the second study does make note that “the proposed Celebration Pointe site would limit opportunities for a new sports events center to serve as part of redevelopment efforts in the Gainesville downtown core or east side,” which caught the eye and concern of city commissioners.

Commissioners passionately expressed their disappointments, concerns, rebuttals and hope for the future before unanimously approving a motion to add a discussion of racial and equity disparities to the agenda of the next joint meeting.

Zachariah is a reporter for WUFT News who can be reached by calling 352-392-6397 or emailing news@wuft.org.
Previous Afternoon News In 90: Dec. 2, 2019
Next The Point, Dec. 3, 2019: Buried Alive: The Story Of The Heroic Rescue That Saved A Gainesville Construction Worker