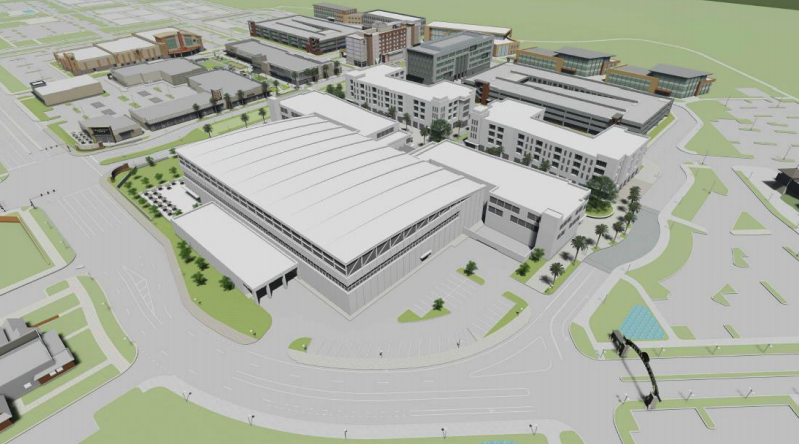 The county's hired consulting firm produced this rendering of a proposed sports events center, seen from the north in Celebration Pointe. (Courtesy of Victus Advisors)

A proposed Alachua County sports arena has run headlong into the politics of a decades-long effort to inject more economic activity into East Gainesville.

Gainesville Mayor Lauren Poe on Oct. 22 sent a letter to Alachua County commissioners that said he and his city commissioner colleagues are concerned the location of a new sports arena sparks conflict between the city and county when it comes to developing East Gainesville.

A week earlier, a county commission meeting had Alachua County leaders focusing on Celebration Pointe as the location for a sports arena, which was once considered at the Koppers Superfund site and two other locations near Waldo Road.

The county’s estimated cost right now for the project is between $30 and $50 million. The facility would host volleyball, basketball, indoor track, conventions, auto shows and potentially concerts.

Two days after the county meeting, city commissioners made known their unhappiness during a meeting of their own.

“I am saying this for the benefit of the public,” City Commissioner Gail Johnson said. “To me, what it seems like you’re doing, is you are absolutely selling out East Gainesville.”

The county objects to that characterization.

According to Sexton, the proposed sports arena at Celebration Pointe just west of Interstate 75 would be funded by the county’s tourist development tax, more commonly known as the bed tax. Over the next decade, the county is also investing $37 million into the reconfigured Gainesville Community Reinvestment Area (GCRA). A large portion of that funding is now expected to help East Gainesville.

City and county commissioners agreed in February to restructure the GCRA. It is a taxpayer-funded city department to redevelop slums and blighted areas in the city. Four areas of the city’s former Community Redevelopment Agency department have merged into one district. According to Tricia Lopez, the project manager at GCRA, the outer boundaries of the former CRA remain the same, but without any interior line.

“Now we collect money together and distribute it depending on which we need most,” Lopez said.

That need — in 2019 and beyond — is most evident in East Gainesville.

Before the consolidation, GCRA allocated funds for four areas according to taxes they collected separately from those areas. As a result, only 8 percent of CRA’s revenue supported eastside redevelopment, compared to 55 percent given to the College Park area near the University of Florida campus.

Lopez said workshops this week with the four communities have begun to help GCRA decide on what projects to spend money. The details discussed will result in a formal plan to commence in April 2020.

According to Sexton, county and city leaders agreed in February that one of the main reasons for the unification was to help East Gainesville get more funds. City spokeswoman Shelby Taylor confirmed that East Gainesville will be the GCRA’s priority.

Under the new agreement, the county will provide more than 50 percent of the funding, though the Gainesville City Commission will retain final decision-making power over how it’s used. In the county’s own Oct. 22 letter to the city, County Commission Chairman Charles Chestnut wrote the county is still waiting for the city’s update about the East Gainesville redevelopment plan.

Accusations of delays, distractions and sprawl

The county’s wait dates back to June 3, when city and county commissioners met. That day, Assistant City Manager Dan Hoffman said the city would bring back some concrete ideas about the redevelopment of 8th Avenue and Waldo Road of these areas at the end of the summer.

Summer officially ended on Sept. 21, and the city is still awaiting an analysis of the site, Hoffman said Thursday night.

It’s not the longer timeline that worries county officials.

“That’s OK,” Sexton said. “But what’s not OK is try to suggest the county commission is taking money out of East Gainesville with the event center, and not even mention the $70 million of GCRA money.”

City Commissioner Harvey Ward said there is a misunderstanding between city and county leaders. He said “there is no delay.” The city on Sept. 5 formally dissolved the CRA and created the GCRA, then on Oct. 3 appointed the GCRA advisory board to work on East Gainesville’s redevelopment.

Taylor said the county is using its GCRA contributions as a way to distract the public from the fact that a sports arena is unlikely to be built in East Gainesville under the current plan.

Sexton disputed that allegation: “Far from being a distraction, the county commission is excited about the $70 million that will be available for a transformational project in East Gainesville.”

City Commissioner Adrian Hayes-Santos said the county’s support for the GCRA is separate from its sports arena intentions.

Hayes-Santos said plans should focus on how to develop East Gainesville rather than a sprawling western push for growth. He expressed his disappointment that county employees or consultants “have never actually done any study in the downtown area.”

There’s even a city-county conflict over the definition of “urban sprawl.”

“Sprawl means you start to go away from an urban center, but Celebration Pointe is at one of the busiest places in the city (near Butler Plaza),” Sexton said. “They use this term incorrectly. We are doing this right where the city said they want a busy area to be.”

‘How much longer is it going to take?’

Still, the city’s concerns haven’t gone unrecognized by the county’s hired advisor. Early in its September report, Victus Advisors noted that choosing Celebration Pointe “would limit opportunities for a new sports events center to serve as part of redevelopment efforts in the Gainesville downtown core or east side.”

This issue dates to at least 2003, when the city and county adopted Plan East Gainesville, a document aiming to revitalize economic development in a historically marginalized area of the city. It suggested, in part, moving the Alachua County Fairgrounds from near the airport toward a more populated area of East Gainesville.

Sexton said that over the past year and a half, the need for new fairgrounds evolved into the demand for a centrally-located sports center, particularly with the fairgrounds moving to Newberry.

In January, Victus Advisors, a nationally-recognized and professional consulting firm hired by the city and county, released its study about the demand for a new sports arena in the county. None of the three East Gainesville sites studied — Koppers and two other sites near Waldo Road — were considered favorable.

The county then asked Victus Advisors to evaluate Celebration Pointe, a place with access to hotels and I-75. Victus came back with an answer in October and said it’s an ideal location for a sports arena.

Rodney Long, the former chair of Plan East Gainesville, said that it’s understandable that the county wants to find a place near the highway, but he believes a sports arena and a community center could coexist — the first at Celebration Pointe, the latter in East Gainesville.

“It can be the genesis of a diplomatic play. The question that most people have in their mind is how much longer is it going to take?” Long said. “Twenty years ago, we finalized Plan East Gainesville, but not a lot happened.”

At the GCRA’s first community workshop Monday night — which focused on eastside redevelopment — some felt that East Gainesville’s most pressing need is not a sports arena.

“We do not need any fancy stuff now,” said Gerard Duncan, pastor at Prayers By Faith Ministries, who lives in East Gainesville. “What we need are grocery stores — a Publix nearby — so we don’t have to drive two miles away to shop.”

Yiwen is a reporter for WUFT News who can be reached by calling 352-392-6397 or emailing news@wuft.org.
Previous Semper Fidelis Society To Honor 241 Killed in Beirut Bombing With Memorial At Jacksonville’s Evergreen Cemetery
Next Legal Community Celebrates Investiture Of Judge Craig DeThomasis