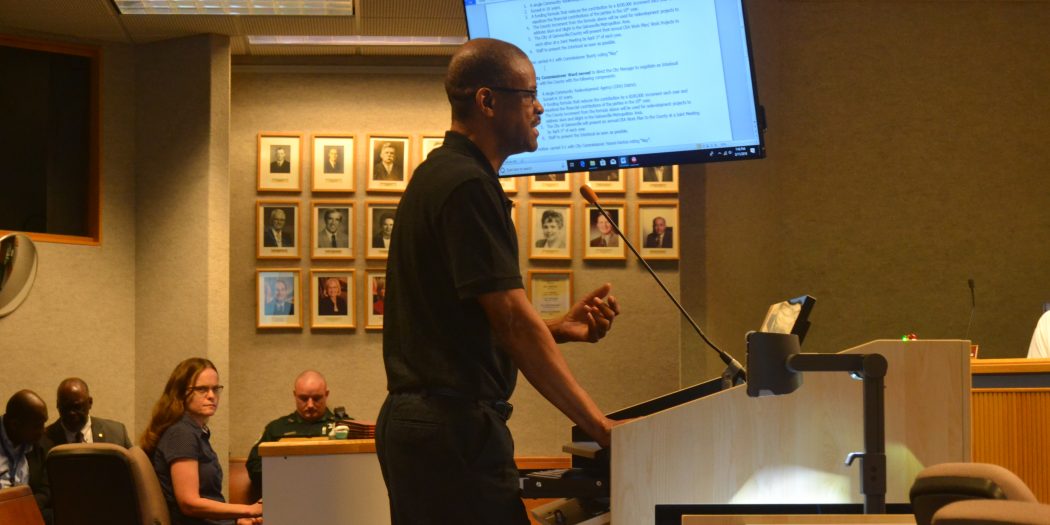 Anthony Johnson, 63, criticizes the joint commission’s CRA agreement in a public comment during Monday’s meeting. A resident of the unincorporated area of East Gainesville, Johnson cited the CRA's inability to directly affect him and his community past Gainesville city limits over several decades. (Eve Rosen/WUFT News)

By Everitt Rosen and Angel Kennedy

The agreement – spearheaded by County Commissioner Robert Hutchinson – merges the four redevelopment areas into one district, reallocates and caps annual funding provided by the city and county to $7.6 million and sets a 10-year end date to complete redevelopment efforts.

Under the current agreement, the city will contribute 44 percent ($3.32 million) of the $7.6 million proposed budget while the county contributes 56 percent ($4.29 million). Alachua County’s contribution to CRA funding will decline by $100,000 each year until city and county investment in the agency costs have been equalized. That money will be used to fund redevelopment projects in the Gainesville metropolitan area.

City Commissioner Adrian Hayes-Santos – who voted against the agreement – argued that the county’s funds may not be enough to adequately affect unincorporated areas outside of city limits, suggesting the joint commission instead establish a land trust with the funds. County Commissioner Mike Byerly, the other dissenting vote, expressed skepticism towards the proposed agreements and said the agreement feels like a “take it or leave it” plan.

In February 2018, city and county commissioners agreed to negotiate and establish an interlocal agreement that would help restructure the agency; Clemons subsequently withdrew the bill from consideration in the state legislature following that agreement.

Since then, the city and county have discussed how to change the agency, with the most recent meeting between the two commissions occurring in December.

In its current state, the county pays two-thirds of the CRA’s $6 million annual budget – a figure assessed by comparing the county’s millage rates to the city. Of that $6 million, 55 percent is allocated for the College Park/University Heights redevelopment area.

By contrast, only 8 percent of CRA’s revenue – less than $1 million – supports Eastside renovations each year. Revenue from one area cannot be used in another.

“For me, it made sense for the funds to be spread all across one district,” City Commissioner David Arreola said during an interview in November. “It’s self-defeating to have one district get more money than the other while the others suffer blight.”

The joint agreement made Monday calls for the two commissions to present a new interlocal agreement at the next joint commission meeting. If the new agreement is signed, the agency can begin conducting a financial analysis and engagement process with the affected communities to determine how to allocate the $7.6 million over the next 10 years.

As the joint commission responded to public questions, some individuals expressed their concerns with the direction of the CRA. Sixty-three-year-old Anthony Johnson, a resident of the unincorporated area of East Gainesville, said he did not feel like the CRA changes were beneficial to addressing the unincorporated community.

“It’s all safe to say that I’m not a fan of the CRA because it’s taking my tax dollars and supplying them to projects in the city — projects that the city may be benefitting from,” Johnson said. “Dollars are tough these days. I need my money to work for me as well.”

Once an agreement is reached, CRA Director Sarah Vidal-Finn and the rest of the agency will be up against the clock to complete ongoing projects while compressing several of its decades-long projects to meet the 10-year deadline. However, Vidal-Finn said she believes restructuring the CRA will give the county its best chance of completing projects in the redevelopment areas.

“I think it’s a good solution for our community, and it will depend on us working together to make sure that we get it right because we’ve got one shot, one decade,” she said.

Everitt is a reporter for WUFT News who can be reached by emailing news@wuft.org or calling 352-392-6397.
Previous Florida State Rep. Anika Omphroy Said Rep. Carlos Smith Bullied, Threatened Her
Next The Point, Feb. 12, 2019: What You Need To Know About Changes To Gainesville’s CRA