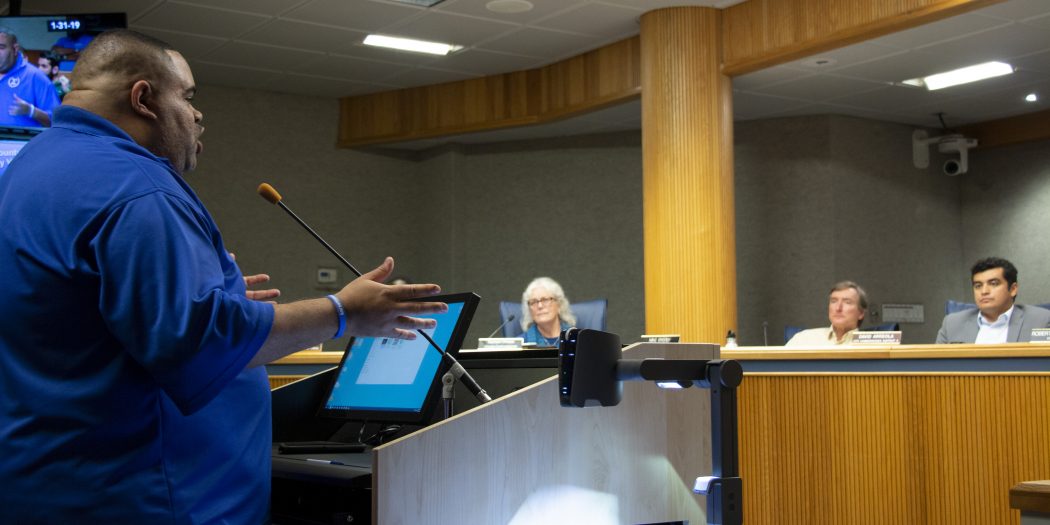 Laughter, sneers and groans from the public filled the stale air on Thursday night as the elected leaders of Alachua County and Gainesville convened to discuss a report that suggested a new event center be built on the Cabot-Koppers toxic superfund site in Gainesville.

Though the meeting lasted for nearly five hours, more questions were proposed than answered.

In a special meeting on Tuesday the county commissioners reviewed a report by their hired consultant, Victus Advisors. Thursday was the first time that both city and county officials had discussed the project publicly.

Brian Connolly of Victus Advisors presented the company’s findings in support of developing the Cabot-Koppers site over two other suggested locations near Waldo Road: the Citizens Field area or the current site of the Tacachale Center. None of the proposed sites were ranked as favorable. The Cabot-Koppers site, although the highest ranked, was labelled only “potentially suitable” with a score of 67 percent, according to the report. Ideal sites score at least 75 percent.

A final budget projection for the project is not yet available.

“I think we’re getting way ahead of ourselves,” county commissioner Mike Byerly said. “First we need to know how much its going to cost, how much we’re going to take in… This is the ABCs, and we haven’t had this discussion yet.”

City commissioner David Arreola also voiced concerns about the lack of figures offered to the board. “For an event center, I am extremely interested in an economic impact study. I want to know not only exactly what it’s going to cost to build, but how much it’s going to cost to bring in and what is the feasibility of actually bringing in that revenue to support the facility?”

While the city and county agreed that commissioners needed more economic information about the event center, they did not agree on the purpose of the center itself.

The county originally paid Victus Advisors $40,000 to evaluate the location for an event center that drives economic impact. The event center was proposed to increase tourism in Gainesville, thus boosting local hotels, restaurants, and other tourism related industries.

The city commission had a different idea.

“We aren’t a sleepy college town anymore. We are a community that is headed in a good direction, and we want to make sure we get there the right way. We want to plan for it and make smart decisions as we go,” city commissioner Harvey Ward said. He doesn’t support a building with a 25-year lifespan.

“We talked about this being a 25-year building, and that broke my heart. The idea that we’re going to spend tens of millions of dollars on a disposable building breaks my heart,” Ward said. “I’m not thinking disposable. I’m thinking transformative and community building here. With that in mind, we need to take our time before we break ground on something that’s going to affect my great grandchildren.”

City commissioner Gail Johnson said the county asked Victus Advisors the wrong question to analyze potential sites. The county focused on the event center meeting a market need. Johnson felt that this center could be a chance to develop East Gainesville for the public good.

“Dragging a convention center in the middle of multigenerational inequity is not going to be the magic bullet. I can tell you that,” Mark van Soestbergen said during public comment.

After more than three hours of the boards asking questions and giving comments, they voted to direct the county and city staff to work together over the next 60 to 90 days to evaluate the possibilities for the Citizens Field and Cabot-Koppers sites, along with the downtown power district and other areas determined by the Gainesville city commission. Opportunities for the development of these sites can include, but will not be limited to, an event center.

These opportunities will then be presented to the boards, along with potential funding sources for each location.

Shelbie is a reporter for WUFT News who can be reached by emailing news@wuft.org or calling 352-392-6397.
Previous Jan. 31, 2019: Evening News In 90
Next The Point, Feb. 1, 2019: There Are Now More Questions Than Answers About Alachua County’s Possible Event Center