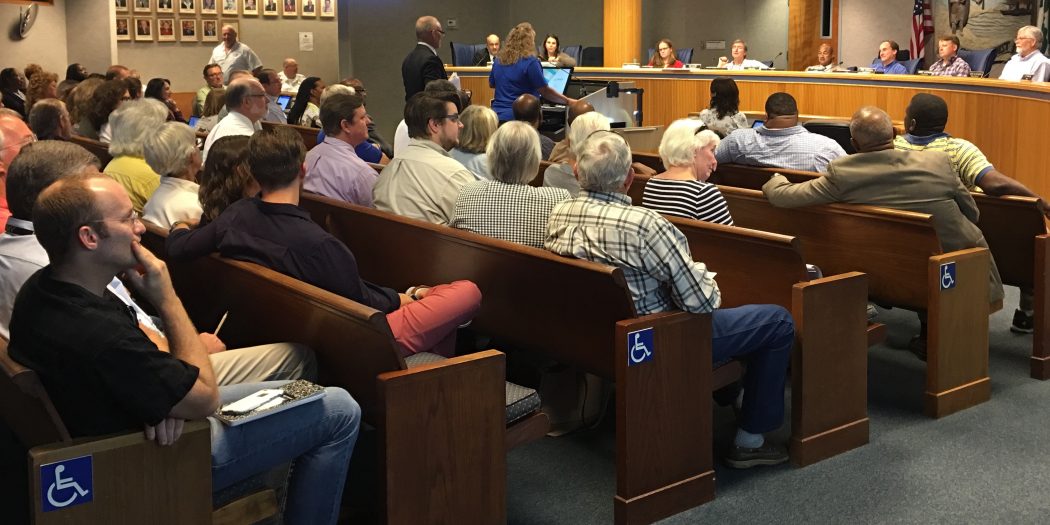 The crowd listens as Cindy Sanders, the UF/IFAS County Extension director, explains to the board the program’s relation to the fairgrounds. (Natu Tweh/WUFT News)

After putting aside plans for a different site in Gainesville, the Alachua County Commission voted Wednesday to relocate the county fairgrounds and extension services to Newberry.

Assuming county and Newberry officials finalize the details, the fairgrounds and a new Institute of Food and Agricultural Sciences Extension Office would be moved to the Canterbury Equestrian Showplace site at 23100 Newberry Road.

Newberry City Manager Mike New said the location is ideal for the fairgrounds and meets several county criteria, including already being zoned for such use and easy access from I-75.

Noting that Newberry Mayor Jordan Marlowe was out of town, New, speaking to the commissioners during the city’s presentation, quoted him as saying: “Mike, you need to land (the fairgrounds) in Newberry. Whatever it takes, land it, and we’ll back you.”

The commission also listened to Hawthorne and Gainesville officials about potential sites. The commissioners deemed the proposed 65-acre site at Southwest Hawthorne Road and 199th Street too far from downtown Gainesville. They also considered it too small to hold the fairgrounds and extension office and another, as-yet-determined event center the county wants to build.

The county had appeared poised to move the fairgrounds and extension office to a portion of the Cabot/Koppers Superfund site adjacent to the Stephen Foster community in Gainesville. Indeed, Interim County Manager Michele Lieberman proposed to the commissioners that they do so moments after the presentations from the Gainesville and Hawthorne officials.

However, after hearing concerns from residents at the meeting that the Superfund site might still be polluted, the commissioners opted for the Newberry site. The county still wants to put a large-scale event center on the Koppers side of the property.

“We have professionals telling us it’s safe, but I want to know if there is a difference in opinion between health professionals,” county commissioner Mike Byerly said.

The plan to put the fairgrounds, extension office and event center at the Superfund site would have cost $42 million, county officials said. Relocating the fairgrounds and office to Newberry means that officials there and with the county must scramble to come up with a new cost estimate.

While pleased that the county chose to move the fairgrounds to Newberry, Robert Pearce, president of the Stephen Foster Neighborhood Association, became emotional as he praised the commission for its intent to redevelop the Koppers property.

“In my humble opinion, the county’s interest in the site — and its willingness to invest over $40 million, and to making an improvement on it — is as good as it gets,” Pearce said.

Residents from East Gainesville were less enthusiastic about the meeting outcome. Rodney Long, a former county commissioner and past president of Plan East Gainesville, urged the commission to consider putting the new event center in his part of the community.

“If you can’t do everything, you can at least do something to spur economic opportunities in East Gainesville,” he said.

Armando Grundy, a member of the Eastside Advisory Board, said in an interview after the meeting that Gainesville didn’t seem to have a fair chance at keeping the fairgrounds in the city.

“It’s obvious that they wanted the fairgrounds to go to Newberry,” Grundy said, adding “it’s a violation of my trust, and my confidence is very much shaken.”

Lieberman said county and Gainesville officials must move quickly to reach an agreement on the Cabot/Koppers site. Otherwise, she said, redevelopment costs could increase if an agreement is not reached in three months, she said.

Natu is a reporter for WUFT News and can be reached by emailing news@wuft.org or calling 352-392-6397.
Previous Waldo “Back To Square One” With Charter School Proposal
Next NPR ‘Rough Translation’ Host Gregory Warner