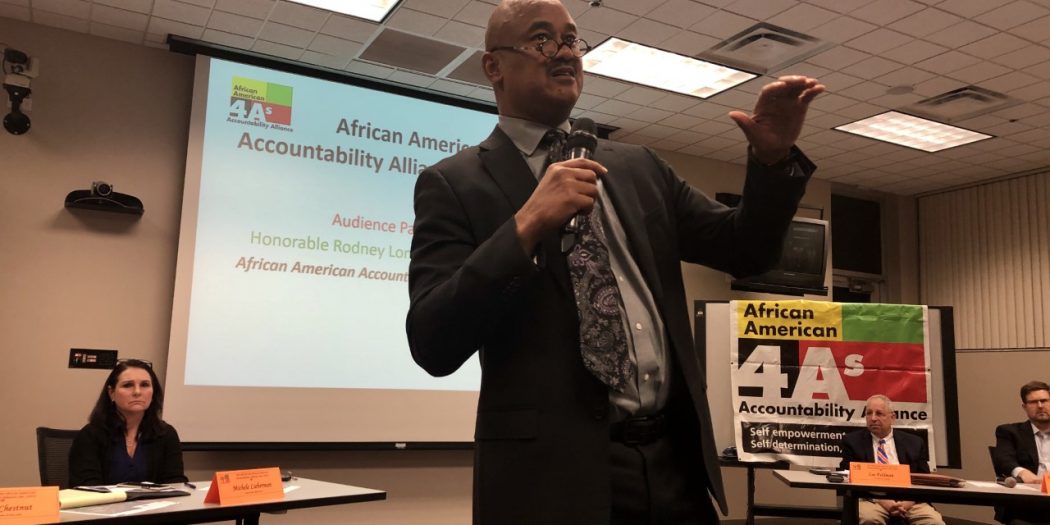 In response to a citizen’s question, County Commissioner Chuck Chestnut discusses his more than a decade long time as a public servant. (Michaela Mulligan/WUFT news)

To open a meeting Monday night, Darry Lloyd asked for a show of hands from the audience in East Gainesville.

Who, like him, had grown up in the city, he asked?

More than a quarter of the 100 people in attendance raised their hands.

The 4As town hall meeting at the Alachua County Health Department was designed as a moment to bring everyone up to speed on the latest in East Gainesville development and help bridge a division between city and county leaders. Plans to bring more economic activity to the area have been in the works for nearly 20 years, but people living there are still waiting for progress. A division between the city and county erupted earlier this fall over the county’s intention to explore Celebration Pointe instead of East Gainesville as the location for a new sports arena.

Rodney Long, president emeritus of the 4As, moderated the discussion, with city and county representatives each delivering 25-minute presentations on their plans for more equitable development.

Gainesville’s unequal expansion was caused by the construction of Interstate 75, Lloyd said. The western part of the county received the benefits and growth that came along with the interstate, pushing interest in that direction.

The eastern part of the city, however, remains stagnant.

Lieberman said Celebration Pointe was the most optimal location for a sports arena because of its close location to hotels, restaurants and retail. For East Gainesville, Lieberman said the county has discussed and supported the idea of a community and regional multi-purpose event center.

The purpose of the arena would be to attract national and international events, while the East Gainesville event center’s purpose would be to build community. The arena would attract more immediate needs for hotels and restaurants within walking distance. Those visiting the East Gainesville event center would most likely be coming from a closer distance. It’s a different focus, Lieberman said.

“We believe both can exist, and both can provide benefit to Alachua County,” Lieberman said.

The proposed U.S. Army’s 81st Readiness Division is an opportunity to bring high-paying, skilled jobs to East Gainesville, she said. Other industrial facilities would surround it, such as the county jail and the county work release facility already in that area.

“I believe there is a true dividing line on Waldo Road, and that’s 39th (Avenue),” Lieberman said. “We cannot change how that area has developed.”

In February, Alachua County voted to restructure the Gainesville Community Redevelopment Agency (CRA), a taxpayer-funded program aimed to help the blighted areas in the community. Previously the CRA consisted of four areas, and it has now been combined to one. Its outside borders remain the same.

The county says it is awaiting proposals for projects like the multi-purpose events center.

Mayor Lauren Poe led the City of Gainesville’s 25-minute portion of the town hall. He spent much of the time discussing accomplishments in the Plan East Gainesville area. The plan is from 2003 and is meant to bring a resurgence of economic development into the East Gainesville area. Poe mentioned successes such as Depot Park and Heartwood neighborhood infrastructure.

Poe briefly went over plans, like a 10-year reinvestment plan and the recruitment of grocery stores for the area. Poe also highlighted private commercial development.

Poe said nine projects have gotten the approval for residential development, 16 for non-residential use, 10 for institutional uses, 22 are undergoing approval from the Department of Doing and 12 are “looking for more flexibility.”

“We are so excited about the new blue center, the new Clarence Kelly Center,” Poe said. “It’s going to be a real community hub for young and old alike, and again the whole design was through community input.”

In a question and response segment, multiple city officials and Long discussed major systemic issues that have added to the development difficulty — like education and an inability to implement affordable housing.

“I just want to get real with you tonight,” Chestnut said. “I’ve been here 16 years folks… Ain’t much happened. I’m frustrated.”

It takes money to do things, he said.

He has his concerns for the less fortunate because they require resources. There is a balancing act at play when allocating money.

“I can remember this discussion when I ran in 2000 for the City Commission, the haves and the have nots,” Chestnut said. “And guess where the have nots are, I don’t have to tell you that.”

For his closing statement as moderator, Long expressed his desire to the city and county to include the community in the planning conversations before decisions are made. Long asked for an open line of communication between the county and its residents. Earlier in the meeting, multiple city and county officials emphasized the need for citizens to attend and participate in public meetings.

In the last moments of the meeting, Lloyd reiterated this sentiment while addressing the audience.

“We have to direct them to what we want, not to just what they are going to offer us.”

Michaela is a reporter for WUFT News who can be reached by calling 352-392-6397 or emailing news@wuft.org.
Previous Afternoon News In 90: Nov. 18, 2019
Next The Point, Nov. 19, 2019: One Year After Paul Williams Was Charged With The Murders of His Wife And Daughter, Is He Mentally Fit To Stand Trial?