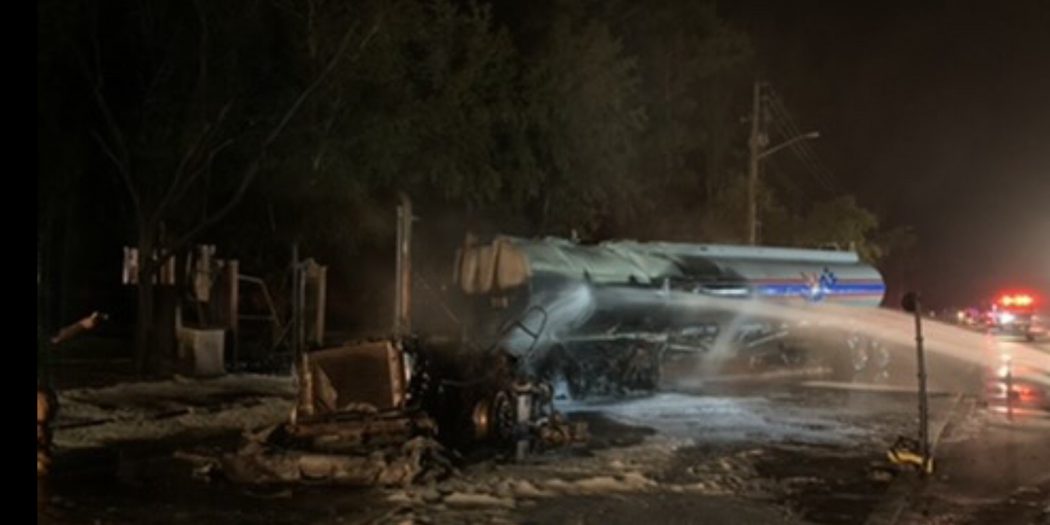 Police officers and firefighters responded at 1:45 a.m. on Sunday to a crash near the intersection of Northwest 43rd Street and Northwest 16th Boulevard in Gainesville.

Sgt. John Mazzuca of the Gainesville Police Department said there was one fatality, though the person’s identity has not yet been released.

Mazzuca says more information will be released on Monday.

According to a Gainesville Fire rescue release, two of the tanker truck’s five fuel compartments ruptured, causing the fire. The truck was carrying over 6,000 gallons of fuel at the time of the crash.

Dhyana O’Driscoll, owner of Angel Whispurzz Cat Rescue, said she drove to the scene of the accident around 2 a.m. after hearing several popping sounds and sirens outside her home.

“The flames were above the tree line. And the firetruck had a big pole and they were trying to dust the fire with some kind of chemical agent. And then the airport fire truck came and was trying to deal with the fuel that had dumped out,” O’Driscoll said.

GFR, ACFR, GPD, ASO, and GRU have extinguished a fuel tanker fire at 2000 NW 43rd St. The Fire was caused by a vehicle crash. The crash is under investigation by GPD. Great effort to all the crews. pic.twitter.com/PCEiuGQfG5

The PetSmart store located in the Millhopper Shopping Center lost power after the accident. Meaghan Kratz, a PetSmart cashier, said later Sunday morning she was having to do all the store’s transactions manually because the store’s electricity was still out.

“I was actually called around 10:18 when we got our normal power back. So before that, we didn’t have any power, so we couldn’t open the store because there weren’t any lights or anything,” Kratz said.

Tomas Perales, a cashier at Circle K, said all the sandwiches in the store went bad after losing power.

“We were out of business for a couple hours, actually. The power was out between like 2 a.m. and 8 a.m.,” Perales said.

Anneliese is a reporter for WUFT News who can be reached by calling 352-392-6397 or emailing news@wuft.org.
Previous Small Town Salvation
Next With Traditional One In Transition, County Fair With New Name Operates In Gainesville