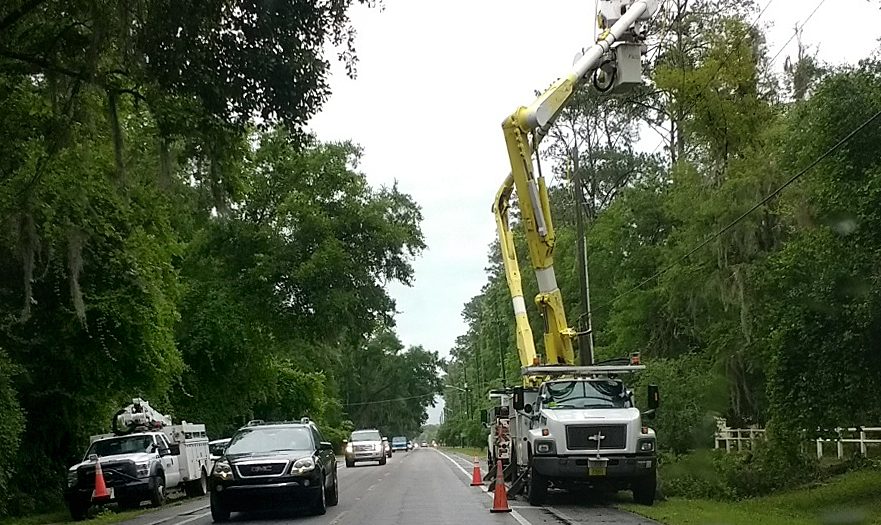 Residents ‘In The Dark’ Over GRU’s Response To Power Outages, Information Updates

The thunderstorm that pounded Gainesville on Friday morning left more than 38,000 customers without power. Yet by 9 p.m., 6,538 were still without refrigeration, air conditioning or hot water.

Residents expressed frustration with GRU’s information shutdown at 9 p.m. on Friday, and some residents did not get their power restored until Sunday morning.

Lauren Munsey, a senior communications specialist at Gainesville Regional Utilities, said electrician crews were working around the clock when conditions were safe.

She said the utility company follows safety protocols for crews to work on power lines or when employees need sleep. Some electric crews also assisted the Gainesville Police Department.  GRU informed customers on recovery efforts through Twitter, until a tweet at 5:53 p.m. on Friday announced it was going to be offline at 9 p.m. This is because GRU only posts on social media after 9 p.m. during a hurricane.

Michelle Zabel, a resident of Gainesville for 36 years, said she was infuriated the moment she read the tweet. She was without power from Friday morning until almost 11:30 a.m. Saturday.

“They posted they were going to be working around the clock,” Zabel said. “We thought those tweets were recycled tweets from the last hurricane.”

Wind records peaked at 59 mph at 11:34 a.m., according to reports from WRUF’s WeatherSTEM Station. As the Friday morning storm passed, winds slowed and reached the next high of 25 mph around 8:00 p.m.

Zabel has lived in her house on Millhopper Road for 17 years and is used to losing power, but not for that long because of a thunderstorm.

“I’m okay with being without power for a couple of days, but this was bad,” Zabel said. “They kept reporting they had people assisting them from out of town, that they were working around the clock — No. We didn’t see that.”

GRU was able to restore power to all impacted customers by Sunday, according to an email from Tony Holstein, planning section chief of Emergency Management Coordination at GRU. He noted that GRU first targeted infrastructure that would restore the most customers as quickly as possible.

Munsey recommends citizens who don’t use Twitter to check for updates from GRU on Facebook. Those without social media can call the power outage line or customer service center,  she said.

Krystin Kasper, who lives in northwest Gainesville, relied on GRU’s social media updates because it felt like someone was listening and trying to help, she said.  As the charge on her phone battery began to slip, Kasper used her car to power the phone so she could stay informed with GRU social media.

“I was furious that they went offline at 9. They promised everyone would get their power back that night and stay updating us,” Kasper said. “People were in the dark and worried, why in the world would you leave them hanging like that?”

After being without power since 11 a.m. Friday, her power was finally restored by 6:30 p.m. Saturday. After this weekend, Kasper is concerned with hurricane season approaches.

“I sure hope they’ll use this as practice,” Kasper said. “But my confidence in GRU doing so is not very high,”