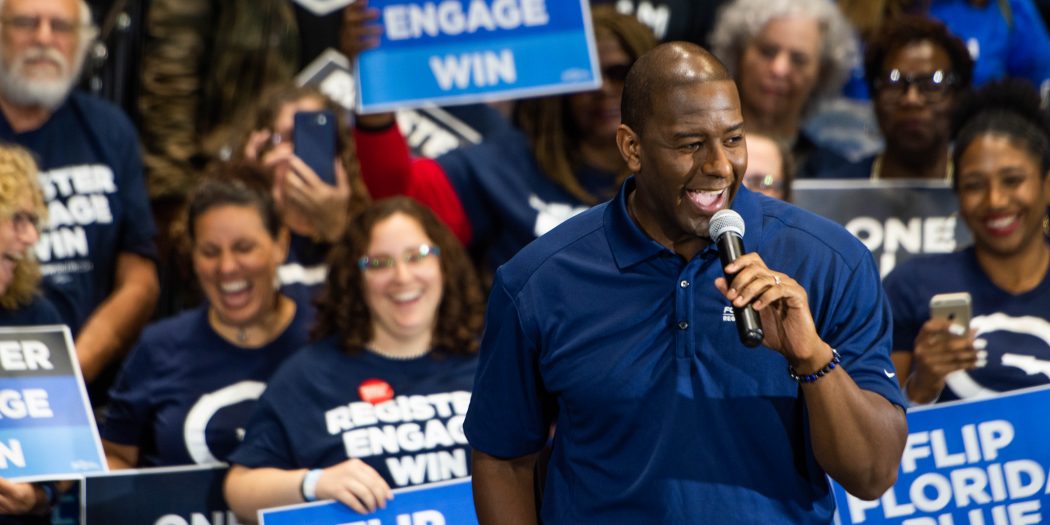 Democrat Andrew Gillum smiles as he talks to a group of supports at Florida Memorial University. Gillum said he wants to do everything he can to ensure a Democrat wins the presidency in 2020. (Grace King/WUFT News)

The former Tallahassee mayor announced he and his voter registration group “Bring it Home Florida” want to register and engage an additional 1 million voters ahead of the general election.

“We got to bring it home, and that didn’t end with a campaign for governor,” he told a crowd of supporters at Florida Memorial University.

Gillum lost last year’s gubernatorial race to Republican Ron DeSantis by 32,463 votes or 0.4 percent. He attributed part of his loss to the thinning margins between registered Democrats and Republicans in the Sunshine State.

In 2008, there were nearly 700,000 more Democratic voters than Republican ones registered in the state of Florida. Today, data from the Florida Department of State Elections Division shows that Democratic advantage has shrunk to under 250,000.

“The road to the White House runs through Florida,” Gillum said. “We can deny Donald Trump a second term right here in the state of Florida.”

Florida’s 29 electoral votes have decided two of the last five presidential elections. Gillum said he hopes that by registering and engaging voters early, he can help the Democratic nominee win Florida.

“If we do our job and we bring this thing home, November of 2020 we are going to evict Donald Trump and send a Democrat to the White House,” he said. “I believe we can do it.”

Merlin said the voter registration pledge and Gillum rejoining the political arena gives her something to look forward to.

“The second you take back Florida, you have that opportunity to change the vote,” she said. She said she wants to help a Democratic candidate win so there is a chance for increased teacher salaries and less standardized testing.

“We need to be reaching out to communities in advance of elections,” she said. “I want to see people in those [legislative] seats that are Democrats, that are gun-sense candidates.”

Gillum’s political committee Forward Florida has about $3.86 million available to spend on this new effort, according to campaign finance reports. The Florida Democratic Party and billionaire Michael Bloomberg have also pledged to fund voter registration efforts in the state.

“It is consequential for the future not only of the state of Florida, but of the United States of America that Florida deliver like we have never delivered before,” Gillum told the crowd of supporters. “I’m committed to that work.”