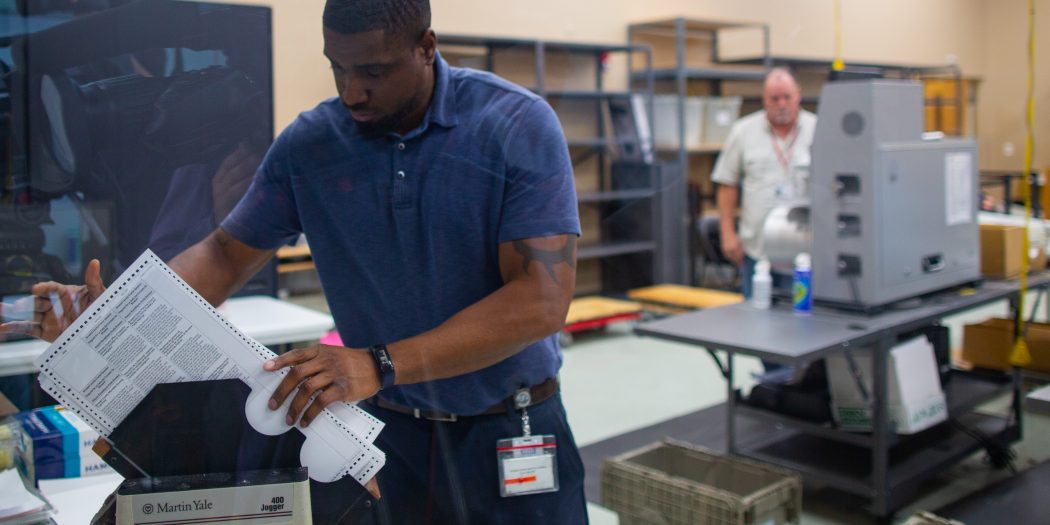 Gillum Loses After Recount, Other Races Go To Hand Count

Florida’s five-day recount fiasco came to a close Thursday, at least for the governor’s race.

The statewide machine recount ended at 3 p.m., with Democratic candidate Andrew Gillum losing to GOP candidate Ron DeSantis by 33,683 votes, the same percent of difference as before the recount.

But two counties failed to recount votes in time for the deadline: Broward and Palm Beach.

Palm Beach County’s machines were only able to recount one race at a time and they broke down half-way through. By the time the deadline came, the county had only plowed through some votes for the U.S. Senate race, not even starting other races.

Broward sent results before the deadline, but the state received them two minutes late.

Gillum still insisted on counting all of the votes.

“There are tens of thousands of votes that have yet to be counted,” Gillum said in a press release. “It is not over until every legally casted vote is counted.”

State law mandates that late results won’t be counted, said Paul Lux, president of Florida’s Supervisor of Elections (SOE) and SOE for Okaloosa County. Instead, counties must report previously recorded totals, which they did.

As for the senate and commissioner of agriculture races, the recount continues. Both races came within less than .25 percent of a difference, triggering a hand recount.

The race for U.S. Senate between Democrat Bill Nelson and Republican Rick Scott remained separated by 12,603 votes — Scott in the lead by 41 more votes than he had before the recount.

Democrat Nikki Fried still leads in the race for commissioner of agriculture against Republican Matthew Caldwell, but now only by 5,307 votes, losing 19 votes since before the state issued the recount.

During the machine recount process, each county put aside ballots on which the machine didn’t pick up marks, Lux said. For the manual recount, counties will only sift through those votes.

“Maybe they left it blank,” he said. “Maybe the voter circled the candidate’s name, instead of filling in the oval.”

All 67 counties now have until Sunday to get through them. Fortunately, counties have been expecting it, since the races have been well within .25 percent for over a week.

Lux said each county will set up tables where counting teams will discern votes one-by-one, while candidate representatives observe.

“[The counting teams] are the ones making the initial determination. Is this a vote for X or Y? Is it a blank vote?” Lux said.

The canvassing board only reviews ballots in case of a disagreement on voter intent between counting team members, or if a candidate observer makes an objection.

Every county will follow the same state guidelines on how to determine voter intent. Nelson already filed a lawsuit on Tuesday, challenging two of the rules. His argument: The rules disenfranchise voters.

One guideline favors ballots marked consistently, saying if a voter casts a vote incorrectly, but uses the same marking-method across their ballot, the vote counts, but if inconsistent, it doesn’t. The other states that “magic words” such as “wrong” or “not this” written on the ballot can indicate that the voter made a mistake, making the vote count, but if a voter crosses out a name without “magic words” the vote doesn’t count.

No ruling has been made on the lawsuit yet.

“This rule is a guideline, and I warned the Division of Elections this a long time ago when they started working on this rule that there is absolutely no possible way you could write a finite document that cover any and all examples of things voters do to ballots,” Lux said.

Lux said these hand recounts will be the first statewide test of laws put in place a year after Bush v. Gore. Laws determining when a race goes to a machine or manual recount weren’t in place at that time, and counties used different ballot-types.

Now every Florida county uses “fill in the oval” or “connect the arrow” ballots, so the process should go smoother, he said.

Once counties submit hand recount returns to the state, Florida’s election canvassing commission will certify the results by Tuesday.

Cat is a reporter for WUFT News and Fresh Take Florida who can be reached by calling 954-657-3385 or emailing cgloria@ufl.edu.
Previous Alachua County Drafts Future To Reconcile Its Past
Next Waldo Burglaries Prompt Citizens Crime Watch