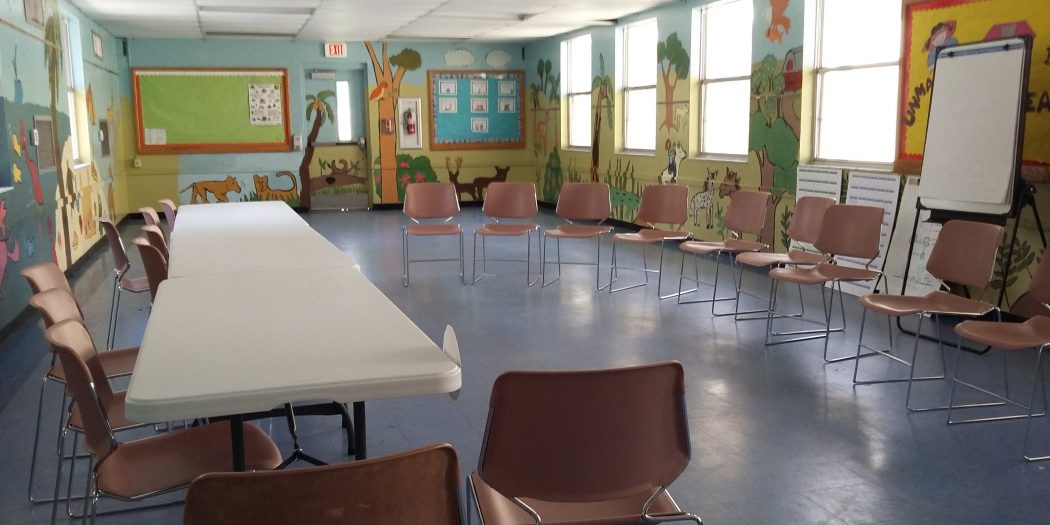 The former cafeteria will hold the Oct. 13 visioning meeting, where residents and business owners can share their dreams for the city square. (Sarah Stanley/WUFT News)

Three years ago, the Alachua County School Board unanimously voted to merge Waldo Community School with Shell Elementary School in Hawthorne, eliminating the town’s only school.

Since then the school has sat silent and vacant, its future uncertain.

The city invited residents to chime in on how they wanted to see the former school building used. Some suggested a mall. Others a flea market. Ultimately, they decided to transform the school into an incubator for local businesses.

With “Waldo Community School” still anchoring the beige facade of the stucco schoolhouse, local manufacturers fill abandoned classrooms in what will soon be known as Waldo City Square.

In May, soap company FinchBerry tore out the media center’s carpeting and started prepping the space to move in for its year-long lease.

The two businesses operate in separate wings of the school. City Manager Kim Worley pointed to other prime locations on campus.

The Noe wing, named after early 1900s principal Hugh Noe, has eight classrooms at about 1,000 square feet each. A short walk down an outside breezeway leads to two 375 square foot art pods, which are connected by a small office.

CareerSource North Central Florida, a company that trains employees and matches them with jobs, is pulling in even more interested business owners, Worley said. Business Services Manager Sean McCoy introduced other potential tenants at the Sept. 13 city council meeting. He brought in Rita Puentes, who plans to make dog shampoo in the Noe wing’s custodian closet.

Rent was set well below market value at $6.50 per square foot to help businesses get a good start, Worley said. Normally, rent would be eight times that amount.

The fate of the main building is still unsettled. The Waldo Historical Society already has an office there. Worley discussed converting one of the other offices across the hall into a meeting room for city council.

City Hall currently resides on a dangerous stretch of SW Fourth Boulevard, but Worley said it will move into the old principal’s office in the coming months.

“It’s intimidating to move because, look around, this stuff’s been here since the 1800s,” she said, gesturing at the furniture and heaps of files in her office.

At a recent city council meeting, Council Chairwoman Carolyn Wade agreed the plan to move was not only necessary for the safety of people trying to reach City Hall, but would also better facilitate Waldo City Square newcomers.

In addition to making the former school a manufacturing hub, Worley said she’s trying to carve out spaces where people can come together as a community again.

“The school was the heart of Waldo,” Worley said. “It truly was.”

She’s wants to bring music and plays to the auditorium and change the no-alcohol policy to host food truck rallies by the playground.

“The townspeople, they want entertainment and stuff like that, which I think the jewel is our auditorium,” she said. “I think the auditorium can turn into something really awesome down the line.”

With final plans still developing, Worley is holding a meeting for townspeople and business owners to give input for the future of Waldo City Square. “Vision Waldo” will take place in the former lunchroom at 14450 NE 148 Ave. on Oct. 13 from 10 a.m. to 1 p.m.

The incubator is moving forward and bringing excitement to parents after the failed struggle to open a charter school earlier this year.

Waldo parent Angela Smith is frustrated the charter school initiative fell through — she would have sent her three children there— but is pleased to see the building put to good use.

Funding a building that isn’t generating anything would waste taxpayer money, but the new development gives businesses a chance to expand into Waldo, Smith said.

“This small town needs people to come in.”

Sarah is a reporter for WUFT News who can be reached by calling 352-392-6397 or emailing news@wuft.org.
@stansarahley
Previous Oct. 3, 2018: Morning News In 90
Next Trump Orders Limited FBI Investigation To Supplement Kavanaugh Background Check