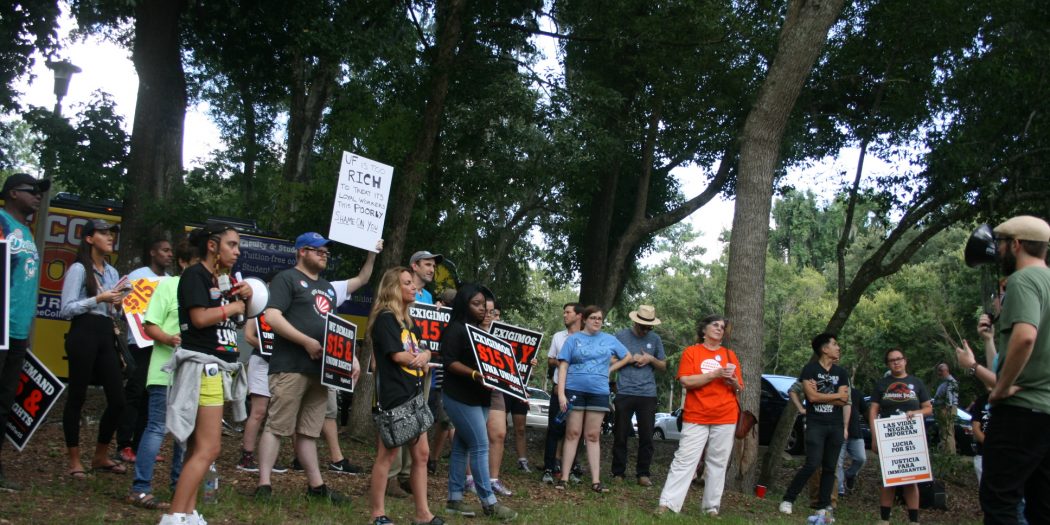 Protesters gathered Sunday at University of Florida’s Levin College of Law, across the street from President Fuchs’ mansion, to demonstrate for better wages, benefits and tuition for UF’s temporary employees.

Jeremiah Tattersall, lead organizer for the Alachua County Labor Coalition’s Living Wage campaign, said there are thousands of OPS workers that live and work in the greater UF community who are being mistreated.”

Tattersall said a woman called the ACLC who had been an OPS worker for 17 years and had not had anything paid into social security the entire time.

“A lot of people assume that, if you work, your employer will pay into social security,” Tattersall said. “Not the case for OPS workers.”

In April, the UF Faculty Senate voted on a resolution that recommended that UF  “create a mechanism to move long-term OPS employees to full-time TEAMS or other classification with benefits when employed in a position for longer than one year.”

Tattersall said if the University of Florida wants to maintain its preeminent status, it’s going to need permanent employees.

“The city of Gainesville and Alachua County put all of our employees, part-time, full-time, everybody, on a minimum wage floor that is leading up to $15 an hour,” he said. “We understand that it’s complicated and it’s difficult to get on that path, but we did it and we think UF can do it, too.”

As the largest employer in the state, Ward said UF is in prime position to address income inequality by boosting wages for its least-compensated employees.

Paul Ortiz, the director of the Samuel Proctor Oral History Program, stressed the value of UF’s temporary workers. He said the program had just finished a project in Mississippi, and without OPS workers, the project would not have been possible.

“We’re supposed to be one of the better universities in nation,” Ortiz said. “If that’s the case, shouldn’t we pay our employees to reflect that?”

“This is our university,” Thompson told the group of protesters. “Every afternoon, an OPS worker listens to their boss talk about their health benefits, and they’re sitting there thinking ‘Am I going to have a job next week?’”

Matthew is a reporter for WUFT News who can be reached by calling 352-392-6397 or emailing news@wuft.org.
Previous Judge Halts Lawsuit Against GRU Authority Referendum, Keeping It On November Ballot
Next July 30, 2018: News in 90