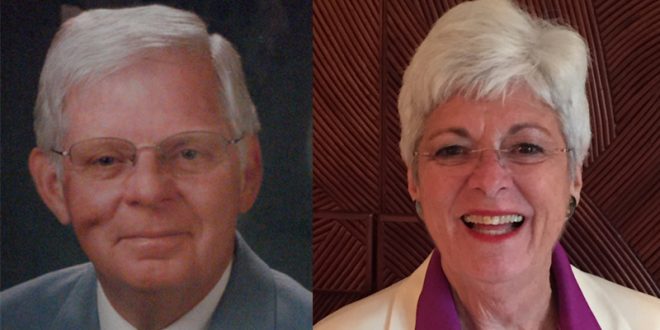 In the Citrus County school board race for the District 4 seat, both candidates, Sandy Counts and Bill Murray, have decades of experience in public education and more than 60 years of residency in the county between them.

Murray describes himself as “a young 75.” Now retired, he served as a school board member from 2002 to 2012 and has 47 years of experience in public education as a teacher and a coach.

Despite being retired, Murray said he had several people contact him about running in the election.

Meanwhile, Counts has been in education for 28 years primarily as a teacher of language arts. Before that, she was in real estate for 20 years, and she believes that helped her gain important business experience. She was also the coach of Crystal River High School’s swimming team for 25 years.

“I figured there was more that I could do,” Counts said after her decision to stop teaching full time in May. “We’re in a bit of crisis in education in this country, not necessarily in Citrus, but we still suffer from a shortage of teachers and intrusive testing. So I thought maybe I could make a difference.”

Both candidates are university graduates, with Murray receiving his bachelor’s from Manchester University and his master’s from Ball State University. Counts received her bachelor’s in English and speech education from the University of South Florida.

The most predominant issues facing Citrus County in the coming years are education-based, Counts said. She said she plans to combat statewide issues of intrusive testing and a lack of funding by addressing these issues at the capitol in Tallahassee.

“One of my main goals is to take our school board and the Florida School Boards Association and get them together in Tallahassee and combat our issues. … It’s statewide, and we need to tackle it statewide,” said Counts, who has voiced her support for a charter-school structure in the past. “We really have to evaluate if we want a free public-education system because it seems like we just keep getting beaten down.”

Murray also said he believes the county’s issues emanate from state budgetary restraints and that it will be difficult to maintain even current programs.

However, Murray said he is satisfied with the technology programs in the county, which focus on “handing down” older devices to younger students to allow proper exposure at an early age. iPads used in middle schools, for example, are passed down to elementary schools once newer models come out.

“We’re at the point where all of our middle school kids are on iPads,” Murray said.

Counts said she believes that there is a delicate balance when it comes to the use of technology in the classroom. However, she added, Citrus was able to exceed the state legislature’s mandate from a few years ago that said more than 50 percent of school children have to have an “individual electronic device” — in spite of the mandate not coming with any funding.

“Computers are an instant source of information,” she said. “But there is no discussion or Socratic circle; there’s no philosophical discussion or interplay.”

Both Counts and Murray are wary of Common Core testing and the greater implications of mandated education versus more local approaches to curriculum.

Counts believes that her direct involvement with testing has given her unique insight into what actually works.

“There’s no level of mastery with Common Core, so it needs to be simplified. And there needs to be levels of mastery at every year,” Counts said. “You can’t possibly — with 180 school days — teach even one segment of Common Core in the time allowed in the school year.”

Murray shares the belief that Common Core somewhat fails to keep children at the forefront and that more decisions should be made locally.

Counts and Murray recognize that much of the work that would come with the District 4 seat in Citrus County — a top 10 school district in Florida in terms of grades, attendance and graduation rates — would have a lot to do with maintaining such a status.

Although satisfied with the county’s high school graduation rate of about 80 percent, Murray said he believes there is room for improvement.

Counts and Murray both acknowledge that Citrus has had successful minority representation among teaching ranks. (The county is populated predominantly by those 55 years and older and less than 8 percent minorities, according to the U.S. Census Bureau.)

In addition to campaigning, Murray also spends time serving as the chairman of the finance committee at his Methodist church. Before the primaries in August, he was endorsed by Citrus County’s main newspaper, the Chronicle.

“I have 47 years in public education, and I have 39 years in the classroom – teacher, coach, athletic director kind of guy,” he said. “I have 20 years in Citrus County, and I have eight years on school board,” Murray said of why voters should choose him.”

When Counts isn’t campaigning, she is still active at Crystal River High School and works as a licensed real estate broker, mostly just for friends now. She is also a member of the Catholic Women’s Association and is involved with several local charities, including food pantries and those that deal with mentally disabled children.

“I believe that I have the best handle on the issues,” Counts said of why voters should choose her. She added that she is confident in her business experience and her knowledge of testing “from the inside.”

Yvonne Bertovich is a junior studying journalism at the University of Florida. She is currently the office manager for the Florida Scholastic Press Association, an editorial intern for Atlantic Publishing, and a WUFT News digital reporter/editor.
@@yvonnebertovich
Previous Florida Votes 2016: Citrus County Sheriff
Next Gator Growl Organizers Trying To Bring The Crowds Back