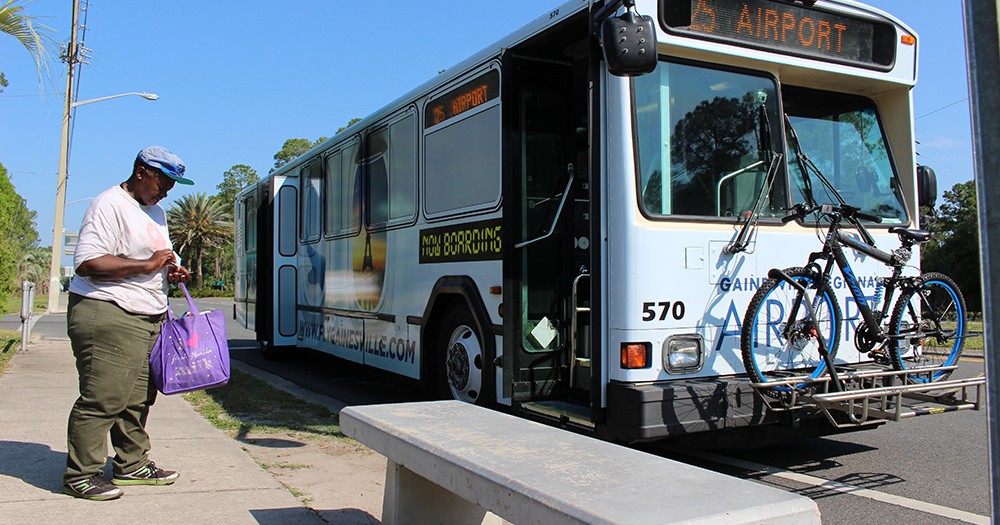 Lilly Hunter shuffles through her wallet to take out her RTS bus pass provided by GRACE Marketplace. (Priscilla Osorio/WUFT News)

How Gainesville Plans To Continue Offering Bus Passes To The Homeless

The city’s current bus pass program, provided for those at GRACE Marketplace and Dignity Village, will expire on Wednesday, and last week commissioners held a meeting to discuss a new plan.

“We’re really happy to see that we were able to come up with a plan that works for everybody,” DeCarmine said.

The city provides GRACE Marketplace with 2,000 bus passes annually, costing the city around $15,000.

Regional Transit System spokesman Chip Skinner said the city, RTS, and the involved homeless centers will discuss how to fund the bus plan next week. The upcoming meeting will also cover whether the city will provide a monthly or yearly bus program.

“We totally understand their need for transportation to get them to doctors appointments, jobs interviews and things like that to give them a leg up,” Skinner said.

Lilly Hunter, a 55-year-old woman, lives in a tent at GRACE Marketplace. When Hunter heads to the bus stop to visit her mother, she brings along her purple tote bag stuffed with action-filled DVDs, an old newspaper and Dial body soap. She said she is very grateful for GRACE Marketplace.

“They’re very helpful for everyone,” Hunter said. “I got my bike, but you know I do ride the bus because I’m way out here.”

Charlene Daughtry, a 53-year-old culinary arts student at GRACE Marketplace, uses her bus pass every day. When she is not preparing bean soup or other meals for the community, she hops on the bus and goes job hunting, commutes to the library as well as the doctor’s office.

“Got to have them [buses]. That’s one of the best things we got here,” Daughtry said. “How are we going to get anywhere?”

DeCarmine said the next meeting will involve discussions about receiving grants to fund the program.

“Those bus passes are the lifeline for people who are out here,” DeCarmine said. “It’s what connects them to the broader community.”

Priscilla is a reporter for WUFT News and can be contacted by calling 352-392-6397 or emailing news@wuft.org.
@priscilla_jou
Previous Early Snowbirds? Florida Sinkhole Yields Ancient Artifacts
Next Coast Guard Rescues 2 Adults, 2 Children After Boat Takes On Water