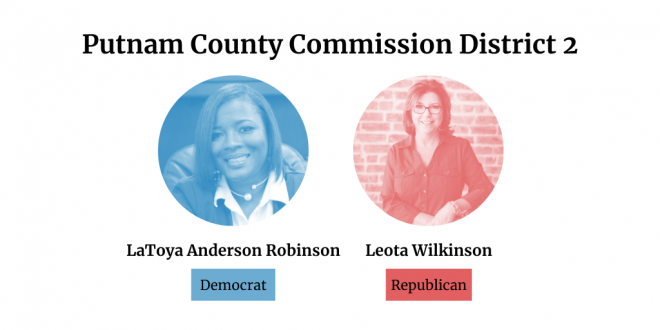 For more information about statewide and national races, check out WUFT’s election coverage on:

On a midterm election ballot, Florida voters will be asked to vote on local school board and county commission races, in addition to their representatives in the Florida House and Senate as well as the U.S. House and Senate. Voters also have a chance to elect or reelect a governor and vote on three proposed amendments.

To see how these races will appear on your ballot, view a sample ballot for the counties below:

Incumbent Kathy Bryant considers herself the “common sense conservative” candidate in this race, and she has been a Marion County small business owner for 17 years. Her campaign has raised $78,290.00 in total contributions, of which she has personally donated $12,000.

Write-in candidate Gina Capone has raised $2,970.00 in total campaign contributions, of which she has personally donated $500. According to her campaign website, her platform centers around stopping the urban sprawl in Marion County, including preventing the Florida Connector Road from crossing through the county’s land.

Carl Zalak III will be the only name to appear on the ballot in this race. The Republican candidate has asserted on his campaign website that he is not a “RINO,” or Republican In Name Only, politician, and he wants to make Marion County a “sanctuary for life.” The incumbent has raised $ $157,430.00 in total campaign contributions.

Brian Christian Donnelly, according to his campaign website, wants to balance growth in Marion County and attract equine-related businesses to the the area. The Massachusetts native has a background in agriculture and sustainability.

Seth Posner has not raised or spent any money on his campaign, according to county records. In Florida, write-in candidates are not required to pay a filing fee, election assessment fee or party assessment fee.

LaToya Anderson Robinson is a fourth-generation Palatka native with 17 years of experience in child welfare in Putnam County. Her campaign has raised $16,158.54 in total campaign contributions.

Leota Wilkinson serves as a district aide to Florida House Rep. Bobby Payne, in addition to owning a small business in Putnam County and selling homes as a licensed realtor. Her campaign has raised $50,011 in total campaign contributions from individuals, businesses and political action committees (PACs).

Incumbent Larry Harvey has served as a Putnam County Commissioner since 2014, and he is running for a third four-year term. His campaign has raised $19,618 in total campaign contributions.

Ronald Burckhard is a retired firefighter and paramedic who now volunteers with the Putnam County Fire Department. His campaign has raised $8,898 in total campaign contributions, of which Burckhard has personally raised $8,548.

Robbi Correa enters November’s mayoral runoff election after no candidate was able to secure more than 50% of the vote. She has previously ran twice for a seat on Palatka’s City Commission. Her campaign has raised $10,449.00 in total campaign contributions.

Incumbent Terrill Hill was born and raised in Palatka, and he now owns a law office in his hometown specializing in personal injury, wrongful death, criminal and medical malpractice. His campaign  has raised $14,561.26 in total campaign contributions.

Eric Martin has personally raised $1,100.00 for his campaign with no outside donors, according to county records.

When is early voting?

In Marion County, early voting will take place from Thursday, Oct. 27 to Saturday, Nov. 5 from 8 a.m. to 6 p.m. at the following locations:

How do I vote on election day?

On Tuesday, Nov. 8, polling places will be open from 7 a.m. to 7 p.m. To vote, bring a valid form of identification to your assigned precinct.

To find out your voting location, enter your stress address in the precinct-finder tools for the following counties:

Can I still register to vote?

The deadline to register to vote in the state of Florida is 29 days before every election. It is too late to register for the Nov. 8 general election, but voter registration is still open for future elections for those who are:

Grace is a reporter for WUFT News who can be reached by calling 352-392-6397 or emailing news@wuft.org.
Previous Florida Votes 2022: What to expect on Election Day in north central Florida
Next Voter guide: Gainesville’s 2022 election races