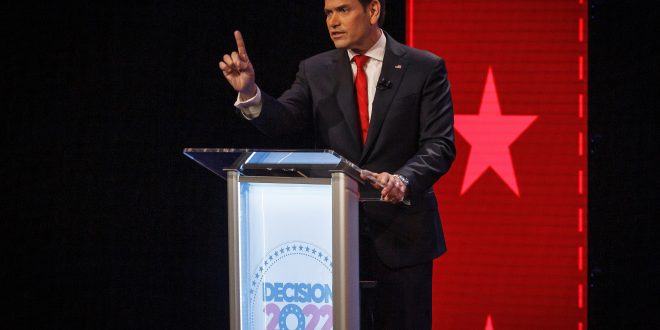 Rubio, Demings tussle in Senate campaign’s only debate but no knockouts

Rubio, facing his closest re-election campaign in more than a decade and behind in fundraising, sought to portray Demings as a pawn of radical Democrats in Washington, ineffective over her five-year tenure in Congress, extremist on abortion rights and naive about gun control. He said she had voted in favor of the “socialists’ budget,” a veiled jab trying to label Demings as a socialist and Marxist.

Demings, a former Orlando police chief trailing Rubio by nearly 5 points in polls, said Rubio had failed to serve the interest of Florida residents after 11 years in the Senate, opposed any exceptions on abortion and flip-flopped on allowing teens to buy assault rifles. She repeatedly  accused Rubio of saying falsehoods about her, squaring her shoulders to face him across the stage.

At one point, Demings chastised: “I’m really disappointed in you, Marco Rubio, because I think there was a time when you did not lie in order to win. I don’t know what happened to you.”

With Election Day looming in only 21 days, a dominant performance by Demings – or a stunning implosion by Rubio – could have tightened the race and shifted projections that Rubio’s seat appears reasonably safe for Republicans on Nov. 8. Neither happened Tuesday night, perhaps forcing Democrats nationally to look toward other states to maintain effective control of the Senate.

Mail ballots have already been distributed to anyone who asked for one in Florida, and early in-person voting starts Monday.

Donors have poured roughly $66 million into Demings’ campaign – roughly $20 million more than Rubio’s campaign has raised. The race is ranked the second-most expensive Senate race nationally only behind one in Arizona.

Demings landed some of her biggest jabs noting that Rubio had once said – after the horrific mass shooting by a teenager at a high school in Parkland, Florida, in 2018 – he would support legislation to prevent an 18-year-old from buying an assault rifle. Rubio said Tuesday night such laws wouldn’t work, even though Florida passed its own state law after the shootings banning anyone under 21 from buying an assault rifle.

“Denying the right to buy it is not going to keep them from using it,” Rubio said. He said he advocates for red-flag laws that would allow police to seize guns from dangerous people.

Demings shot back: “Families of victims of gun violence heard that and they’re asking themselves, what the hell did you just say?”

“This is about taking dangerous guns out of the hands of dangerous people,” Demings said, stabbing her finger for emphasis and her voice rising. “The overwhelming majority of people in our nation want us to do just that. How long will you watch people being gunned down in first grade, fourth grade, high school, college, church, synagogue, grocery store, movie theater, a mall and a night club and do nothing?”

Rubio jabbed at Demings’ track record in Congress. He noted that she voted 100% with House Speaker Nancy Pelosi. He also said she never passed a bill that became law except for renaming two Post Office buildings. “There is not a single federal law on the books that she sponsored and got passed,” Rubio said.

Demings said she passed a measure helping law enforcement officers obtain mental health resources. She suggested Rubio was denigrating the two men – an Orlando city councilor who overcame segregation and a police officer killed on duty – for whom the postal buildings are now named as unimportant.

Demings accused Rubio – who described himself as “100% pro-life” – of supporting bans on abortions with no exceptions for victims of rape or incest. Rubio did not dispute that directly but said no such legislative proposals would ever be viable. He said a federal bill he is co-sponsoring with Sen. Lindsey Graham, R-S.C., that would ban abortions after 15 weeks of pregnancy includes those exceptions.

Rubio said Demings supports abortions up to the moment of birth. Demings called that a lie. She has previously said she supports the right to an abortion up to viabilty – when a fetus can survive outside the womb, at about 24 weeks – but she did not definite any specific time frame Tuesday night. Demings is a cosponsor for the Ensuring Access to Abortion Act, an effort by Democrats to codify Roe v. Wade into law.

“Senator, how gullible do you think Florida voters are?” Demings asked. She fired at him: “He can make his mouth say anything today. I support abortion up to the moment of viability.”

On immigration, Rubio said Demings voted against President Donald Trump’s border wall plan and opposed Florida’s plan to send National Guard troops to the Texas border. Rubio said illegal border crossings were out of control, a popular political message among Republicans, and said he blamed Venezeulan President Nicolás Maduro for so many Venezeulans trying to reach the U.S. “This cannot continue,” Rubio said. “No country in the world can tolerate that.”

Border patrol agents have documented over 2.1 million encounters at the U.S.-Mexico Southwest border during the 2022 fiscal year. Immigration agents’ encounters with Venezuelans have more than tripled since the 2021 fiscal year, now reaching nearly 154,000.

To mitigate the crisis, the Biden administration announced Wednesday a migration enforcement process for people from Venezuela attempting to cross the border, effective immediately.

Demings said she supports more border agents and better technology to capture immigrants crossing the border illegally, and noted that U.S. law allows immigrants to request asylum in the United States. “Enforce the law, but also obey the law,” she said.

On hurricane help, Demings said climate change was driving some of the devastating effects of hurricanes in Florida. “We have got to get serious about climate change,” she said but did not elaborate.

Rubio said Florida needs faster reimbursements from the federal government to pay for hurricane damage. He sidestepped a question from the debate moderator, WBPF anchorman Todd McDermott – asking what specific federal action can protect Florida from sea-level rise and what he called “these monster storms” – and McDermott did not press him for an answer.

Rubio said Florida communities hit by Hurricane Ian immediately need emergency relief. He did not mention missing the vote for natural disaster relief following the Category 4 hurricane. He was in Florida with the president and first lady surveying the storm’s damage and meeting with first responders during the vote.

Florida has traditionally been considered a battleground state but has been trending red in recent elections, as Republicans now outnumber registered Democrats. Progressives here hope to appeal to voters after the Supreme Court’s reversal of Roe v. Wade and years of culture wars stoked by a Republican-led Legislature and Gov. Ron DeSantis.
___

Troy is a reporter for WUFT News who can be reached by calling 352-392-6397 or emailing news@wuft.org.
Previous UF student charged with assaulting second bar employee in 3 months
Next Black-owned farms are disappearing. One Alachua County man is fighting to preserve what’s left