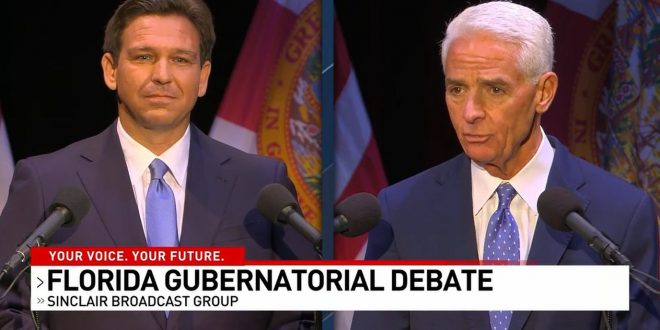 Crist, a former Republican governor, is running to reclaim his old job – now as a Democrat. As polling places across Florida closed on the first day of early, in-person voting, pressure is mounting on Crist to close DeSantis’ double-digit lead. While Crist did not appear to make any fatal errors on the debate stage, his performance is unlikely to turn the tide of the race.

DeSantis, comfortably ahead of Crist in the polls, sought to characterize his opponent as a party-switching chameleon who will shift “with whatever wind he needs to to try to keep his political career alive.”

When Crist asked DeSantis point-blank if he intended to serve a full second term, DeSantis stalled awkwardly before moderator Liz Quirantes moved to a new topic.

The line of questioning provided the governor with one of his biggest zingers of the night, telling the audience, “The only worn-out, old donkey I’m looking to put out to pasture is Charlie Crist,” DeSantis said.

In a fundraising email sent immediately following the debate, DeSantis said Crist was a “rubber stamp for the Biden regime,” allied with allowing criminals to wreak havoc in cities and “dangerous for Florida.”

“Ron, you talk about Joe Biden a lot,” Crist said. “I understand, you think you’re going to be running against him. I can see how you might get confused, but you’re running for governor.”

Crist suggested DeSantis would be too distracted by a presidential campaign to tackle rising homeowner insurance rates.

“I don’t think his focus is going to be on you,” Crist told the audience.

Both candidates were quizzed about high-profile flights DeSantis arranged to transport roughly 50 – mostly Venezuelan – migrants from Texas to Martha’s Vineyard.

While Crist referred to unchecked migration as a crisis, he referred to the flights as a horrible political stunt. DeSantis responded saying the effort was intended to draw the attention of political elites.

“It isn’t funny – It’s inhumane how you treated these people,” Crist said.

“What we did, we put this issue front and center.”

DeSantis, mostly reserved, scaled back some of the more combative language his campaign has used to tar opponents as radical extremists, though Crist called the governor’s positions on LGBTQ issues and transgender athletes divisive.

DeSantis described transgender surgery as “genital mutilation,” saying teens should not be allowed to obtain the procedures in the state because they might regret it as adults.

“If you’re a 15-year-old, you can’t go get a tattoo in the state of Florida, yet we’re saying you can get a double mastectomy? Of course not,” DeSantis said.

“There you go, Ron, it’s all about culture wars,” Crist said. “You love dividing our state, Blacks against whites, gay against straight, young versus old.”

At times, Quirantes tangoed with the candidates and a boisterous audience that occasionally interrupted. While climate change was not addressed during the debate, there wasn’t a shortage of other hot-button issues

Neither candidate directly answered a question about how many weeks old a fetus must be before it should be protected from abortions. DeSantis signed a law earlier this year – now being challenged in court – that prohibits abortions in Florida after 15 weeks with no exceptions in cases of rape or incest.

DeSantis defended Florida’s Parental Rights in Education Law. During the spring legislative session, it was derided by opponents as the ‘Don’t Say Gay’ bill. The law prohibits instruction on sexual orientation and gender identity in kindergarten through 3rd grade classrooms. The governor said it restored parents’ autonomy over children’s education and opponents were “waging the culture war.”

DeSantis also defended a new state law banning all workplace or classroom instruction promoting the ideas of institutional racism, privilege or oppression based on race, gender or national origin.

“You don’t have the temperament to be kind and decent to other people who don’t look like you, who don’t act like you and who don’t contribute to you,” Crist said.

“I don’t want to teach kids to hate their country,” DeSantis said.

“Why you think that’s happening right now is beyond me,” Crist said, before adding that educators should teach the history of the nation, including slavery, without a “whitewashed approach.”

DeSantis took credit for keeping the state’s businesses open during the pandemic, which he said boosted Florida’s important tourism industry and returned children to schools. Crist responded by blaming DeSantis’ pandemic policies for the state’s more than 80,000 COVID-19-related deaths.

Carissa is a reporter for WUFT News who can be reached by calling 352-392-6397 or emailing news@wuft.org.
Previous The Point, Oct. 25, 2022: How to watch tonight’s Gainesville mayoral debate
Next Gainesville’s native son celebrated with a weekend of music