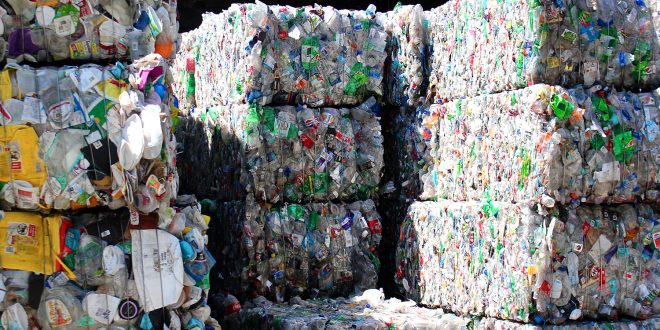 Bales of recycled trash are placed on trailers and sent to their proper facilities to continue the recycling process. (WUFT Archives)

New Gainesville policy may be the push aspiring recyclers need

Omar Oselimo gathers his employees at the restaurant he operates along the ever-bustling West University Avenue to announce a new city policy.

The policy he is explaining requires dining establishments in Gainesville to make a big change. Restaurant employees can no longer automatically include plastic utensils or sauce packets with pickup orders. It is now up to the customer to specifically request them.

Oselimo owns the Reggae Shack Café, a Jamaican restaurant that’s just a 10-minute walk from the University of Florida campus. Inside the dining area, old speakers are stacked up against a wall. Vinyl records hanging from the ceiling spin slowly in the current of the air conditioner. The recycled décor hearkens back to Oselimo’s career as a radio host and represents his culture and personal beliefs. As a self-proclaimed supporter of the environment, he said he approves of the city’s new policy.

“We only have one planet, right?” Oselimo said. “If we want it here for the future, I support sustainability 100 percent.”

This change is a win-win situation, he said.

“I think about it like this: It will be better for the environment, and it cuts costs,” he said.

The city passed this policy as a part of its zero-waste initiative. There are three parts to it. The Solid Waste Ordinance Revision reduces single-use plastic accessories like forks and ketchup in restaurants. It also requires apartment complexes to collect discarded but usable furniture and donate it to places like Goodwill.

The Food Diversion Ordinance creates an expanded food network to redirect food that is past its sell-by date to Gainesville food pantries. This way, food that is still good to eat can go to people who need it most instead of ending up in a dumpster.

According to the City of Gainesville website, the more food waste that ends up in the landfill, the more methane it creates as it decomposes. So along with feeding more people, this ordinance can also reduce the greenhouse gas output of Gainesville waste sites.

Finally, the Food Waste Ordinance establishes compost sites in residential areas and at businesses. This ensures organic materials can be processed to eventually get reused.

The commissioners’ goal is to make the city of Gainesville completely waste-free by the year 2040. This plan was drafted by City Commissioner Adrian Hayes-Santos. He said the zero-waste project has been in the works since he came into office six years ago. He attributes the project’s success to community groups like Zero Waste Gainesville and Sierra Club.

A zero-waste subcommittee was formed to review issues of waste production and management as well as draft solutions. Hayes-Santos said this policy goes beyond the norm for this region. The ordinance is probably the most progressive solid waste ordinance in the southeastern United States, he said.

Hayes-Santos said he came into his role seeking to make improvements to the city and the surrounding environment.

“How are we going to leave the world, not just for us right now, but for our future?” he said.

Hayes-Santos said he expects policies like these to make it easier for people to recycle and reuse in hopes of achieving a waste-free Gainesville in the next 18 years.

To put it into perspective, when children in kindergarten today graduate from college, the city could have a net waste output of zero.

“A lot of it is just making minor changes to behavior and by providing the regulation that requires them to do that is the perfect little nudge that we think will loop people into the right direction,” he said.

He said he agrees with Hayes-Santos about the progressive nature of Gainesville compared with that of other communities.

“Residents, local organizations and city workers were able to provide input throughout this process,” Heimbach said. He said Gainesville will be a leader in sustainability in the southeastern United States.

He described the progress that has helped to implement this plan.

“We are seeing investments in the infrastructure in our community to handle our waste in better ways,” he said.

He said people acknowledge they should be better about recycling, and they want to do more. People are adaptable and, over time, their habits will improve as recycling and donation access are bolstered by these policies, he said.

Oselimo said he is optimistic about the new ordinances, but he urges organizers and officials to make sure they execute this plan the right way.

“Do it so people can stay bought into it long term because it was implemented correctly,” Oselimo said.

Oselimo said he fears that, if the ordinances are not rolled out properly, people will oppose further policies like these based on their negative experiences.

“They should do a pilot program with a few small businesses so the idea can come to fruition like it should,” he said.

Oselimo said he was not aware of the ordinances until almost two weeks after they began.

“Nobody ever approached me about this,” he said. “I didn’t know. When there’s something that’s going to affect businesses directly, somebody should come around and leave a note or message.”

Oselimo was not following the new rules because he had no notice of them, he said. The law, which asks restaurants to stop using single-use plastic waste and require some tossed items to be donated, went into effect on Sept. 2. The city of Gainesville code of ordinances states the penalty for violations will be a fine of up to $500 or jail time up to 60 days.

This presents the main challenge for the city: Getting residents up to speed.

“Our focus right now is on education and letting those that are impacted know about the ordinance,” said Heimbach.

He said city officials will send direct letters and use social media outreach to inform the public. They are also working with industry organizations such as the National Restaurant Association, the Gainesville Chamber of Commerce and major apartment companies.

As city management workers and local business owners focus on getting on the same page, Hayes-Santos looks ahead to the next steps toward a zero-waste city.

“We have to be thinking about what we are creating 10, 20, 30, 40 years from now,” said Hayes-Santos. “We can’t just continue to be a society that just throws everything away.”

Jessica is a reporter for WUFT News who can be reached by calling 352-392-6397 or emailing news@wuft.org.
Previous Rock revetment project underway to restore Flagler Beach shoreline after Hurricane Ian
Next Decolonizing the Curriculum, Episode 4: Remembering Black joy in Florida