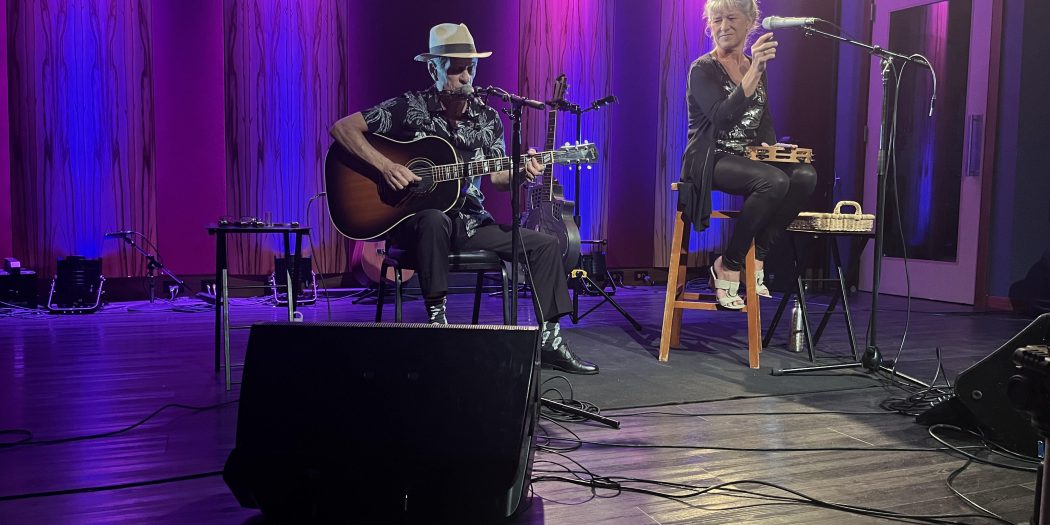 Lead singer for the duo “Blues meets Girl” Kasimira Vogel, 60, told a brief story in between songs during her set at the North Central Florida Blues Society acoustic showcase. She recalled her songwriting habits, and touched on a sentiment likely held by many musicians.

“You write music from experiences,” Vogel said. “The blues is life.”

The passion for the genre shown from Vogel was prevalent throughout each performance Sunday, as the blues society continued its effort to increase appreciation for the blues in Gainesville

Held at the Heartwood Soundstage near downtown Gainesville, the event marked the second-annual acoustic showcase the non-profit organization has put on. The event took place at the High Dive in 2021, but moved to its current venue to better fit the mood of the music played.

This showcase, meant as a fundraising event, was an acoustic-only performance — the blues society also holds electric showcases on occasion — which lends itself to a more casual environment for both the audience and performer. Colorful mood lighting and acoustic ceiling tiles presented an ideal stage venue for the occasion.

“It’s more of a sit down, be comfortable, enjoy the sound experience,” blues society vice president Jules Gliesche, 59, said. “They have a beautiful stage, the acoustics in that room are great, it’s made to sit back and listen to music.”

Five different musical acts performed, ranging from duos, accompanied solo acts and small ensembles. Some musicians performed covers of blues classics, while others came equipped with original pieces to display. There was no prior rehearsal for all five acts to come together, meaning the onus was on each performance to prepare itself sufficiently before showtime.

“This venue is just incredible,” Vogel said during her duo’s performance.

The blues, a genre of music that rose to popularity in America in the early 20th century, has seemingly fallen out of relevance and is now unknown to many, according to Gliesche. Aside from the fundraising opportunity, one of the biggest reasons for the showcase is to give the public in a town not known for blues an opportunity to hear the music and possibly find a new interest in the genre.

The reception when people come to hear the music is almost universally positive, according to blues society president Rob Richardson.

“I’ve always believed there are a lot of people who are blues fans, and they just don’t know it yet,” Richardson, who is 54 years old, said. “They just haven’t heard it.”

Gainesville, a long way from the roots of the genre in New Orleans, relies in part on the group to keep the blues going, according to Gliesche.

“You can’t keep a style of music alive if you don’t play it,” Gliesche said.

And though Gaineville does not have direct ties to blues, the city has fostered enough cultural significance to bring musicians from out of town to stay.

“There’s so many great musicians that aren’t from Gainesville but move to Gainesville and find this is their home,” Richardson said. “A lot of it is because of the wonderful cultural environment there is here.”

Outside of fundraising events such as the acoustic showcase, the organization brings in acts from around the world to perform in Gainesville and holds “open-mic” events for more casual musicians to perform in front of an audience, Richardson said.

Gliesche, who earned a doctoral degree from the University of Wisconsin-Madison and works at the University of Florida in linguistics, said outreach to the community is at the top of the priority list for the blues society, as the organization seeks to build upon its base and increase its familiarity in the community.

For the members, the camaraderie built from the organization was evident during the show — performers stayed after their sets to watch the other musicians, whistling and cheering on their peers.

“It does build a certain sense of community, because people who share a common taste can go share it,” Gliesche said.

Carson is a reporter for WUFT News who can be reached by calling 352-392-6397 or emailing news@wuft.org.
Previous Original Gainesville activists reconvene, continue marijuana decriminalization battle
Next Gainesville artist’s market fosters community into the fall season