There is an ongoing dispute between the North Central Florida Police Benevolent Association and Alachua County Sheriff Clovis Watson over labor laws.

The association’s leadership accuses Watson of violating the labor laws, saying he has not been fair on negotiations for new contracts, offering deputies benefits and policies that had already been declined by the organization.

The group last week announced it was filing a lawsuit against Watson, saying he won’t negotiate, leading to a lack of a wage increase for deputies.

In a written statement, association President Jody Branaman said Watson is now offering deals that had its members had previously declined following the potential of a lawsuit.

“The definition of insanity is doing the same thing over and over again and expecting a different result,” Branaman wrote. “Now that Sheriff Watson is facing a lawsuit over his unfair labor practices, he is re-sending our members the very same deal they voted down just a few months ago with the hope that they’ve forgotten how disingenuous the first offer was.”

In a letter to Alachua County Sheriff’s Office employees on Wednesday, Watson outlined how the office is helping officers by implementing an increased cost of living adjustment, simplifying the take-home vehicle policy and offering more educational allowance per year.

“I hope to continue bringing you more benefits worthy of the sacrifices you and your family make in the name of safety for a public who doesn’t always understand,” Watson wrote. 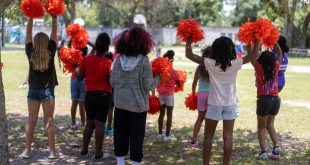 The need for more affordable out of school programming has been central in local discussions around youth violence.