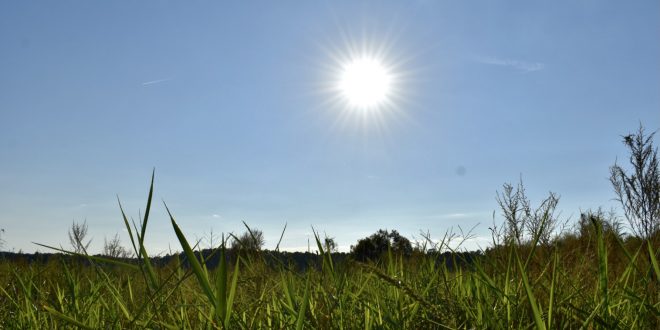 The sun shines brightly over Tuscawilla Preserve on a September day. It is an ecosystem home to many different animals, including sandhill cranes. (Juliana Ferrie/WUFT News)

With flowers and food, Robert Rosa pays respect to his ancestors as often as he can.

At burial mounds, the 53-year-old member of the Taíno tribe uses these items to thank his ancestors for their sacrifices, especially through tobacco — a sacred item. The Alachua Tradition Burial Mound, located alongside Tuscawilla Road in the Micanopy Native American Preserve, is no exception.

This makes plans for a Dollar General at 16324 S. U.S. Highway 441 a matter of respect when it comes to Native American heritage, Rosa, a member of the American Indian Movement and Florida Indigenous Alliance, said.

The Alachua County Development Review Committee voted to approve the Final Development Plan for the Dollar General Sept. 9, causing debate among Micanopy residents. However, a case between Concept Companies, Inc., the project’s developer, and Alachua County is ongoing, according to court documents filed the same day.

Concept Companies is asking for review of the Board of County Commissioners’ Aug. 10 decision denying the developer’s Scenic Road Variance Request, according to a petition for writ of certiorari filed on its behalf. The board voted to give Tuscawilla Road a scenic designation April 27, which put a truck weight limit of 50,000 pounds in place.

Dollar General does not have a tractor-trailer under this amount, according to a letter requesting relief through the Florida Land Use and Environmental Dispute Act. Concept Companies’ attorney David Theriaque sent the letter to Chair Ken Cornell Sept. 7.

Theriaque and Mark Sexton, Alachua County’s communications and legislative affairs director, both declined to comment on the case.

The county considers the quality of its scenic, historical and cultural resources, as well as criteria such as the road’s interesting geomorphic formations, natural vegetation, presence of water bodies and historical importance along the road, among other things, Daniels said.

“It offers extra protection for those roads,” she said.

Like Rosa’s concerns, the plans for the Dollar General prompted a strong response from the community.

Considering the area’s history as a village with a burial mound and as a battleground, Rosa sees the store’s construction as offensive and inappropriate.

Attorney Marcy LaHart, who represented neighbors at the Development Review Commission meeting Sept. 9, said going forward, she and her clients will participate in the dispute resolution process, supporting the county’s denial of the variance.

“Micanopy is a very quiet, little town,” she said. “Our roads are not designed for trucks that weigh more than 25 tons.”

LaHart said she thinks the board has a solid basis for denying Concept Companies’ variance request. For instance, the harm is not unique to the company: The road’s landowners will also be unable to drive trucks over the weight limit.

Allowing heavy trucks in a residential community is not in the public’s interest, she said.

“In fact, I think if Concept Companies intentionally had tried to pick the worst possible place in our town to build a Dollar General, it couldn’t have done a better job,” she said.

Michael Presley Bobbitt, 45, a playwright and real estate appraiser, said he is in favor of the Dollar General. Unless residents drive elsewhere for goods and services, Micanopy isn’t a place that can support them, Bobbitt said. People assume members of the community have transportation, he said.

“It puts a lot of pressure on our lower-income neighbors to not have a place to be able to buy reasonably priced staple goods,” he said. “I think we can all be good neighbors and try to support bringing some of the essential services that would make it an easier place to live.”

While the location is near Native American burial grounds and the site of the Battle of Micanopy, that’s true of the city in its entirety, as well as much of Florida, Bobbitt said. He believes those who built houses in the city are also to blame.

“No one is suggesting that we should build a Dollar General on a sacred site,” he said. “That’s not what’s happening. This is near one, so is everything else in Micanopy.”

Aaron Weber, 48, who has lived in Micanopy since 2011, said he isn’t against Dollar General — just the location. The tractor-trailers will ruin the road, clip the old trees and create noise, Weber said.

The ecosystem has lots of wildlife, including gopher turtles, cranes and coyotes, he said. Truck drivers might not stop for turtles crossing the road, as Weber did on Wednesday.

“Concept Companies says on their website, you can look, that they’re a good neighbor and they try to work with the community,” he said. “But they’re just running us over, just bombing our nature and bombing our history.”

Weber said he wants Concept Companies to work with the people of Micanopy.

“We will help you find a spot,” Weber said. “And it’ll be one that’s closer for the citizens to walk to and won’t tear up our history or our sensitive ecosystems.”

Juliana is a reporter for WUFT News who can be reached by calling 352-392-6397 or emailing news@wuft.org.
Previous Citrus High School Football Player Collapses, Dies During Practice
Next Alachua County Library District Saw A Surge In Card Sign-Ups In The First Half Of September