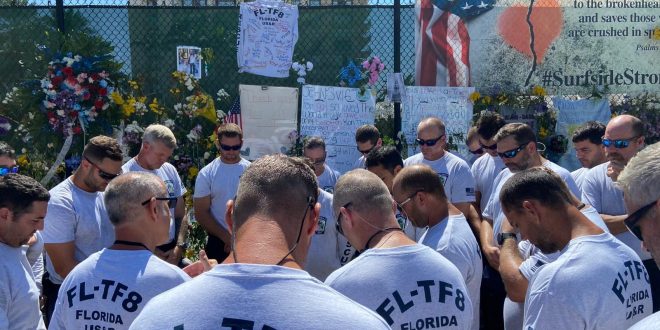 Following the collapse of a condominium building in Surfside, Florida, a rescue task force — including members of Gainesville Fire Rescue — was sent to aid the rescue effort June 27.

They got back to work Thursday night, following a 96-hour rehabilitation stretch to relax and spend time with their families prior to returning to work.

The condo collapsed overnight on June 24, and the death toll rose to 94 over the weekend.

Gov. Ron DeSantis declared a state of emergency the day of the collapse, and this paved way for President Joe Biden to approve aid from the Federal Emergency Management Agency, according to a press release from the governor’s office.

The task force first developed following the attacks on September 11, 2001, because it showed that such a group was needed for specialty incidents, said Joseph Hillhouse, interim deputy fire chief at Gainesville Fire Rescue. The task force is deployed regularly for hurricanes as part of the good neighbor policy, in which they help other parts of Florida in hopes that they receive the same help in the case of a disaster in Gainesville, he said.

The decision to deploy the task force is made by the state after rescue efforts requested mutual aid from the state, Hillhouse said. It’s a long chain of command through the city manager, city commissioners, fire rescue, and various other executives, said Gainesville City Commissioner David Arreola.

Arreola said he was amazed by the number of mutual aid agreements in the state and that he is happy that the team is coming home.

Previous Putnam Board Of County Commissioners Voted To Move A Confederate Monument. Now They’re Considering An Ordinance To Protect It.
Next Local Group Cleans Up Gainesville Rivers And Creeks In Summer Trash Tournament