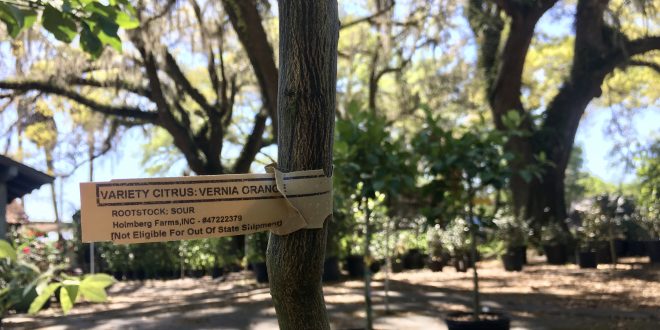 Mike Barron has seen a lot more customers come in to buy fruit trees in the past year.

Barron, owner of Blooming House Nursery in Newberry, attributes the increased demand to a landscaping trend started during the pandemic, with more people staying home.

The result: The nursery is struggling to supply enough fruit trees for everyone who wants them.

His is one of many area nurseries having fruit trees available to sell. As growers hurry to pot plants to meet the demand, businesses are left waiting for shipments and unsure of arrival.

Blooming House has already received three shipments since the start of January, which is the number it normally gets in a year. Barron said the typical fruit tree customer mostly comes in for citrus, followed by peach trees. Now, his entire stock is limited: The nursery was out of tangerine trees, while only some oranges and Meyer lemons remained. Just one or two peach trees as well.

Empty shelves are not the only consequences owing to the shortage. Aiming to get trees out to nurseries, growers are potting them as soon as they can – even if the size of the tree suffers.

“This last load for spring, were a lot smaller,” Barron said. “The guy I get mine from – I called him, and he’s got some that he’ll sell, but they’re not completely rooted into the pot – he’s already selling them.”

Orange production is also taking a hit this year across the state and nation.

The citrus industry has been facing challenges for years, including citrus greening disease and a decrease in acreage across the state. North Florida has a particularly difficult relationship with the fruit, as temperature quickly determines whether citrus will thrive or fail.

Jim Notestein, owner of Notestein Nursery in Gainesville and a former Alachua County commissioner, noted another concern: As citrus production stagnates, so does its diversity.

“One of the things that they’re working on is trying to increase the choices of cultivars – of rootstocks, budwood and medicinal and nutritional details,” Notestein said. “Clearly, there’s only a few things to get discovered, to get put to work.”

He said the delicate nature of growing plants also impacts the stock of area nurseries.

“When people make plans like farmers do about the weather, your whole plan can go sideways when a tornado shows up,” Notestein said.

Enio Ximenes, 32, of Gainesville, decided last year to plant fruit trees around the city as part of the nonprofit Edible Plant Project. He sought to battle the food desert of east Gainesville by offering edible, healthy snack options in residents’ backyards.

The pandemic, however, has put a halt to his planting goals, leaving Ximenes to buy only a small number of trees and other materials, as he looks to restart the project next spring.

“Before, I was part of a smaller group,” he said. “I guess we’re a bigger group now, because there’s more people that are doing things on their house and trying to plant trees.”

Blooming House finally received its latest tree shipment on April 26, but Barron said he’s unsure when it will get citrus ones again.

The wait isn’t bothering Ximenes. In his effort to expose more people to the benefits of fruit trees, he said the past year – not only the pandemic but more delays due to more storms – will make growing and serving edible plants more palatable.

“People are probably going to value more having some sort of fruit or vegetable growing in their yard,” he said.

Marlena is a reporter for WUFT News who can be reached by calling 352-392-6397 or emailing news@wuft.org.
Previous Authorities: Father Suspected Of Killing Two Young Sons, Including UF Batboy, Self And Burning Vacation Home
Next Overcoming Impossible: COVID-19 Florida