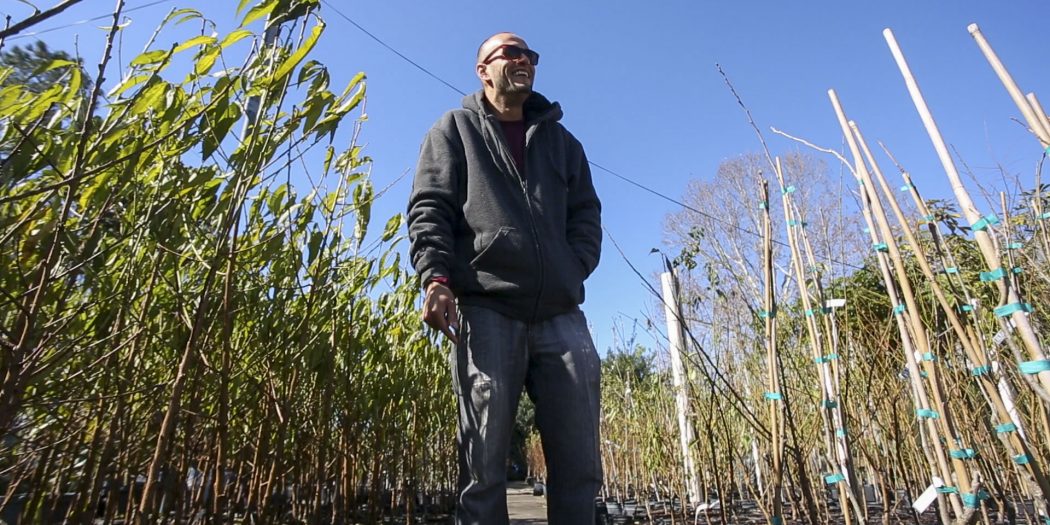 Enio Ximenes chooses fruit trees at the Blue Star plant nursery in Hawthorne. He bought apple and persimmon trees, which he plans to use in a pilot for his tree-planting project in east Gainesville. (Kasamba Kokayi/WUFT News)

Where Healthy Food Is Scarce, A Dream Of A Flourishing Fruit Tree In Every Yard

When Enio Ximenes arrived from California four years ago with his girlfriend Jacquelyn Cafasso, the couple began volunteering at the nonprofit Edible Plant Project.

The nonprofit, he said, “stood out because they were doing education, and they were trying to get people to plant edible plants in their yards.”

“I wanted to be a part of it,” Ximenes said.

Now, to help tackle food insecurity and improve life in east Gainesville, Ximenes said he plans to plant fruit trees in the yards of willing residents, starting in his own neighborhood off Hawthorne Road.

Ximenes intends to go around to his neighbors to offer them a few types of fruit trees to pick from. If they accept, he will then bring the tree to them and plant it, taking care of the tree until it is an adult. At the same time, he will teach the homeowners about the tree and how to look after it. After that, he will leave it to them.

“I’m still in the planning stage right now,” Ximenes said. “I’m just setting goals and figuring out how much I can realistically do.”

The east side of Gainesville, said Karen Woolfsted, director of communication and development for the Bread of the Mighty Food Bank, “is a food desert. The people there don’t have access to food.”

Even though there is a Walmart in the area, there are no grocery stores, Woolfstead said. Bread of the Mighty is a nonprofit that distributes food to pantries and soup kitchens across Alachua. Last year it gave out 5.7 million pounds of food in Gainesville.

According to United States Department of Agriculture data, almost all of east Gainesville is in what is classified as a food desert. A food desert is an area where affordable, nutritious food is difficult to obtain, according to the USDA. Census data from 2015 indicates that most of east Gainesville’s residents are low-income and low-access, meaning that they qualify for food stamps and are at least 10 miles away from the nearest grocery store, making it difficult for them to get quality fresh food.

Ximenes, 31, grew up on a farm near the Brazilian town of Formosa. He left Brazil when he was 15. In Gainesville, he works with the Allied Capoeira League, a Brazilian martial arts academy. He drives children for its after-school program.

While volunteering at Edible Plant Project, Ximenes and Cafasso began to work closely with Faith Carr, a past volunteer coordinator and Carolina Madera, the current volunteer coordinator. Carr said that Ximenes was one of the nonprofit’s most dependable volunteers, often working a stand at the Bo Diddley Plaza farmers market. Ximenes also helped the nonprofit’s orchard to provide people with fruit tree cuttings and teach them how to grow trees from them.

“He was an integral part of it,” Carr said. “He was there doing the groundwork for the orchard before the first tree was planted.”

After about six months, Ximenes left to start an orchard of his own on seven acres he had bought in Waldo, testing to see which fruits can best survive year-round.

Ximenes said he doesn’t plan to start his fruit tree project until next year. For the pilot, he will choose five homes. Because the trees are for the community, he will place them on the edges of the homes, so neighbors can also pick the fruit.

Ximenes will have the support of the Edible Plant Project. Madera said the nonprofit will donate cuttings so that he doesn’t have to buy individual trees.

He said Ximenes ought to get community input on the project, to hear residents’ concerns or ideas. He also needs to educate the community by way of trying to change its food culture. People who are used to fast food, Mesh said, may not want to put in the work that comes with growing it and processing it themselves.

“No, it won’t solve the problem of food insecurity,” Mesh said. “But it’s a start toward the larger problem.”

Kasamba is a reporter for WUFT News who can be reached by calling 352-392-6397 or emailing news@wuft.org.
Previous Proposed Bill Scratches At Key Cat Issue, Would Ban Declawing
Next Vietnam Veterans Ride To Honor One Another At Second Annual Event