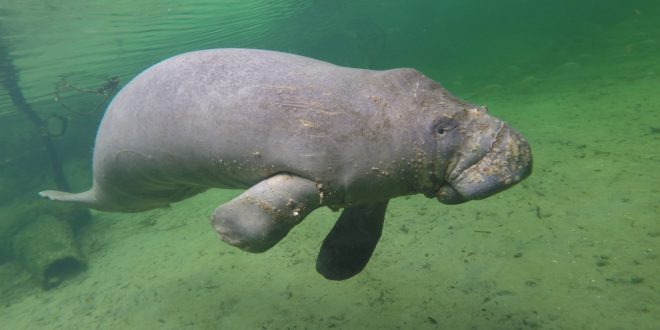 The depletion of seagrass beds have led to many cold-stressed, emaciated manatees such as the one photographed. This can be seen with the white lesions on his snout and flippers, a skinny shape and sunken appearance in the back of the head, forming what is called a “peanut head.” (Photo courtesy of Save The Manatee Club)

Every winter thousands of manatees migrate through Florida’s waterways in search of warm water and plentiful food.

This year, though, the seagrass beds that these marine mammals rely on as their primary food source have been insufficient in supply, causing at least 540 manatees to die so far in 2021. The five-year average for annual deaths is 578.

This mass death has been officially declared an Unusual Mortality Event by the Working Group on Marine Mammal Unusual Mortality Events. This group, established by the National Oceanic and Atmospheric Administration Fisheries in 1991, determines when an unusual mortality event is occurring and directs responses and investigations. Florida Fish and Wildlife Conservation Commission has made this crisis a top priority within the state.

While the commission has not officially declared a cause of these deaths, the state’s working theory is that the scarcity of seagrass beds is to blame.

In a statement on its website, the commission has expressed concerns over the availability of food for manatees. “Environmental conditions in portions of the Indian River Lagoon remain a concern. Preliminary information indicates that a reduction in food availability is a contributing factor. We will continue with a comprehensive investigation and share information as it becomes available,” according to the statement.

The Unusual Mortality Event has been expanded to Florida’s entire East Coast, where over 550 manatees have been found dead since December 2020. Many of these deaths have occurred within the Indian River Lagoon, a popular winter destination for migrating manatees.

“The upper Indian River Lagoon is where most of the winter manatee habitat is,” said Patrick Rose, Aquatic Biologist and Executive Director of the Maitland-based Save the Manatee Club. “That lagoon is where the most pronounced loss of seagrass is.”

This sudden lack of food sources for manatees is not due to any significant increase in the manatee population, but rather it is the product of harmful algae blooms. These algae blooms are caused by a combination of unregulated pollution, high water temperatures and slow-moving currents.

Water pollution from fertilizer runoff in residential and agricultural properties overload the water with phosphorus, nitrogen and carbon. This boosts algae bloom growth which damages the seagrass ecosystems by depleting oxygen and obstructing sunlight, making the water unfit for seagrass growth.

“If you had to pick one of the worst places for seagrass to have been devastated from algal blooms and high turbidity as a result of nutrient loading,” Rose said, “the Indian River Lagoon was the worst place for it.”

According to Rose, COVID-19 postponed research that was meant to assess the health status of the manatees congregating near a power plant in Titusville. The inability to perform the scheduled studies left Save The Manatees Club in the dark as the situation was becoming more severe.

Many manatees have become dangerously malnourished this winter, having lost muscle mass as well as fat. “Even if they’re finding forage now, the manatees are already so weak that they may not be able to make that switch from near-starvation to a healthy condition while they’re having to swim long distances to find food,” Rose said.

Despite state regulations, Rose believes routine monitoring is needed to ensure systems are performing up to standards. According to Rose, failed wastewater and stormwater systems have been a major contribution to the water pollution that feeds into algae blooms.

Both state and local laws can help in the efforts to restore Florida’s waterways and reverse the damage done to the environment.

“Just like you want to repair a broken bridge or highway, you need to repair these broken ecosystems,” Rose said. “These problems are decades in making; it’s going to take a lot of money to fix it.”

Improving these waterways would not only protect the state’s diverse marine life, but it would encourage tourism as well. “People can come enjoy our waterways rather than seeing algal blooms and dead manatees.” Rose said.

Plenty of organizations are working together to help aid the threatened species.

Blue Spring State Park in Orange City is currently raising money to restore and improve its manatee rescue and release site, where staff work with the Manatee Rescue and Rehabilitation Partnership to save manatees from boating incidents, entanglements and other threats to their health. After rehabilitation, many of these mammals are released back into the wild at the site.

Darrell Thomas, Blue Spring State Park services specialist, said the park acts as a refuge for the manatees. “We ask visitors to stay away from the manatees and not to feed them or give them water,” Thomas said. “Once a manatee feels safe around humans, they’ll begin to approach them. People are the biggest threat to manatees, so we want to discourage any human behavior.”

On March 31, Save The Manatees Club held virtual events for Manatee Appreciation Day. Educational livestreams with experts were held for viewers to learn about, appreciate and help these gentle giants. One of the ways to support them is through the Adopt-A-Manatee program, where over 30 manatees could be adopted for a small fee that goes directly back towards rescue and rehabilitation, education and public awareness and manatee protection.

The Florida Fish and Wildlife Conservation Commission encourages people to report any manatee injuries or unusual behaviors through its hotline at 1-888-404-FWCC (3922).