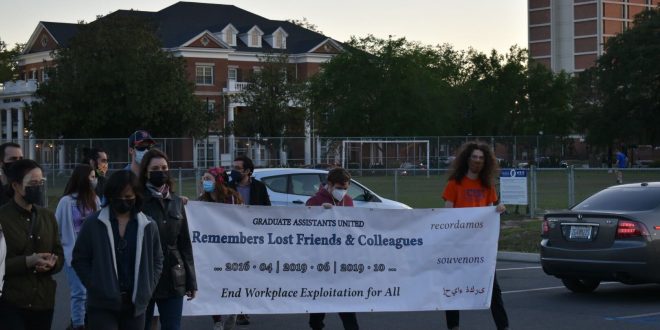 Members of the union Graduate Assistants United walk across the University of Florida campus on Thursday, April 1, 2021, in memory of Huixiang Chen. (Alex DeLuca/WUFT News)

A long, white banner bearing the words “we remember” in multiple languages and “End Workplace Exploitation for All” stretched across the steps of the University of Florida’s administration building on Thursday night.

Underneath it, surrounded by small candles, sat a framed photo of a smiling Huixiang Chen — a UF international graduate student who died by suicide in 2019.

UF’s Graduate Assistants United on Thursday evening held a vigil to honor 30-year-old Chen’s life and demand accountability for his death. It’s been more than a year and a half since Chen died and left behind notes accusing his advisor of mistreatment and academic misconduct.

A university investigation into his death has dragged on since July 2019, with scant information released thus far about its findings. The university last month placed on leave Chen’s advisor, engineering professor Tao Li.

Around 30 students and community members marched from Norman Field to Tigert Hall, where the offices of UF President Kent Fuchs and other top administrators are located. They lit candles, spoke about their experiences as graduate students and held a moment of silence for Chen.

Standing on the steps of Tigert Hall, GAU President Bobby Mermer read aloud a letter the union sent the university seeking greater transparency regarding its investigation into Chen’s death.

Among other demands, the letter calls on UF to provide a target date for the conclusion of its investigation and release a statement on its preliminary findings.

“The lack of response and delay of justice by UF has had a substantial negative impact on the morale of graduate assistants, who feel UF has not placed priority on investigating the most heinous alleged academic crime imaginable,” Mermer read over the sound of cars and scooters passing by on 13th Street.

Afterward, he walked up the steps to the building’s front doors and taped a copy of the letter to them.

Like many people at the vigil, Kang never met Chen. But since learning about his suicide in 2019, she said she’s felt compelled to join in the ongoing demands for accountability in his death.

“Fortunately, my professor is really nice. He cares about academic honesty, and my own well-being,” she said. “But not all professors are like this.”

By holding the vigil, Mermer said GAU hopes to remind the university that people haven’t forgotten about Chen’s death. The union plans to wait on a response from the university before making its next step.

Alex is a reporter for Fresh Take Florida, a news service of the University of Florida College of Journalism and Communications, and can be reached at adeluca@freshtakeflorida.com.
Previous Two Women Aim To End Medical Desert In West Ocala With Newly Established Medical Center
Next Faith Leaders On Navigating Their Community Through A Pandemic