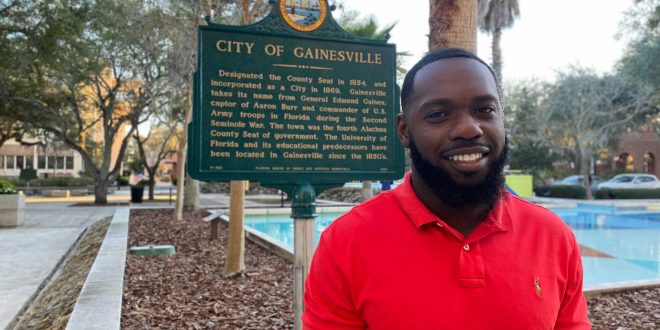 Fareed Johnson, 28, was elected as chair of the Gainesville Police Advisory Council at City Hall on Wednesday. “I bring a unique vision on how law enforcement interacts in our community,” he said. (Kalia Richardson/WUFT News)

The voting for the 11-member panel’s leadership positions proved contentious.

Council member Bob Cohen recommended Fareed Johnson, a commercial driver who had previously served as vice chair, because of his perspective as a 28-year-old Black man.

However, two members – Keyon Young, 21, a night auditor at a local hotel, and Ernest Walker, 42, who works at a fast-food restaurant – said a newly appointed member should serve as chair.

Walker suggested Andrew Miles serve as chair, saying the 63-year-old executive director of the Greater Duval Neighborhood Association has witnessed police brutality and better understands how the police feel toward the community.

“Mr. Andrew Miles is in the heart of ‘Out East’ Gainesville,” Walker said. “I think he would be a great overseer.”

Johnson received six votes, Miles four votes and Walker one vote for chair. The prior council chair, Craig Carter, is no longer a member of the panel.

Jeanna Mastrodicasa, associate vice president of the University of Florida Institute of Food and Agricultural Sciences, was selected as vice chair. Johnson has served three years on the council, while Mastrodicasa has been a member for about eight years. Mastrodicasa and Carter are also former Gainesville city commissioners.

Saying the council’s mission took on a heightened urgency as protests erupted nationally and locally last summer over police tactics and misconduct, the city commission last fall amended an ordinance to expand the panel’s membership from 10 to 11. The commission also mandated that it would appoint the panel’s members, and that they would report to the governing body.

The council is responsible for reviewing complaints from the public against the police department as well as the department’s internal affairs investigations. The panel also recommends changes concerning policing to the city’s commission, manager and police chief.

As City Manager Lee Feldman reviewed the ordinance during the meeting, Walker noted that it focused on policing procedures specific to people of color.

“It always says of color or Black,” Walker said. “It doesn’t say white. That seems to be a problem within itself.”

“No board has the ability to direct any member of staff to do anything,” Feldman replied. “If you ask us to consider something, we’ll consider it.”

A Florida statute prevents Gainesville from creating a police review board, which would have more authority or autonomy, rather than an advisory panel, said Cohen, 71, who has served on the council for several years.

Miles said although the council’s sole power is to advise, its voice still matters.

Police Chief Tony Jones and Chief Inspector Jaime Kurnick, who is in charge of the internal affairs division, were also present at the meeting.

Jones said a prior iteration of the council helped lead the department to begin having its officers use body cameras while on patrol. The chief added that he values the community’s concerns.

“You are not going to arrest your way out of a problem,” Jones said while noting that crime in the city had decreased by 5.46% last year, though there were seven more homicides in 2020 compared to the year before.

Young expressed concern that merely looking at homicides as statistics tends to cause police departments and the public to ignore the problems occurring in the community that lead to them.

“I hate when we start the conversations like this,” Young said. “Let’s open up and talk about why that’s happening.”

Johnson said that at future meetings the council would focus on a wide range of concerns, including school drop-out rates, use of police force and arrest data, GPD discipline policies, license plate recognition cameras and policing in schools.

The council delayed its review of internal affairs investigations to its March 24 meeting.

“We’re not going to build Rome overnight,” Johnson said. “But let’s work on it.”

Kalia is a reporter for WUFT News who can be reached by calling 352-392-6397 or emailing news@wuft.org.
Previous Gainesville Urban Management Plan Aims To Set Forest Regulation And To Represent The Entire Community
Next The Point, Feb. 25, 2021: Meet The New Leaders Of Gainesville’s Police Advisory Council