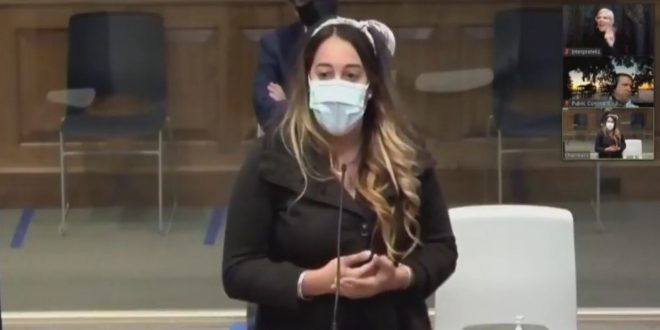 Danielle Chanzes speaks to the City Commission Thursday afternoon. She expressed dismay over the ages and backgrounds of the people who applied for the Police Advisory Council vacancies. (Courtesy of City of Gainesville livestream)

During one of its final meetings of the year in which the national discussion on race and policing tactics shifted as never before, the Gainesville City Commission encountered a problem.

Not enough people applied for the 11 vacant seats on the city’s Police Advisory Council, which the commission expanded this year from 10 seats when its mission took on a heightened urgency as nationwide summer protests erupted over police tactics and misconduct. The Police Advisory Council was established in 2014 to study the city’s police department and make policy recommendations regarding all aspects of public safety services.

Commissioners on Thursday struggled with deciding how to vote on the 16 applicants.

There are different term lengths up for appointment, and some applicants had previously served on the council.

One applicant in attendance on Thursday, Danielle Chanzes, said many of the current council position seekers are over 30 years old.

“The applicant pool that you have right now is pathetic,” said Chanzes, 27. “It’s not reflective of the community.”

Commissioner Gail Johnson suggested opening up the application process again and reaching out to the Gainesville chapter of the Dream Defenders and the UF NAACP, as the city encourages more people — particularly more people of color — to apply.

About half of the 16 applicants for the Police Advisory Council spoke on why they wanted to be appointed to a term and gave their opinion on opening up the application again.

Chanzes asked the commission what outreach the city had made in the first place to advertise the openings. She said the only reason she knew about it was because she followed the city on Facebook and happened to see a post soliciting applications.

A motion to reopen the application and for the Police Advisory Council passed unanimously.

The application will open again for one month, and commissioners plan to vote on appointments at their second meeting in January.

Victoria is a reporter for WUFT News who can be reached by calling 352-392-6397 or emailing news@wuft.org.
Previous Florida Governor DeSantis Says Nursing Homes Will Be 1st To Get COVID Vaccine
Next The Point, Dec. 4, 2020: You Have Another Month To Apply To Make Recommendations About Gainesville Policing