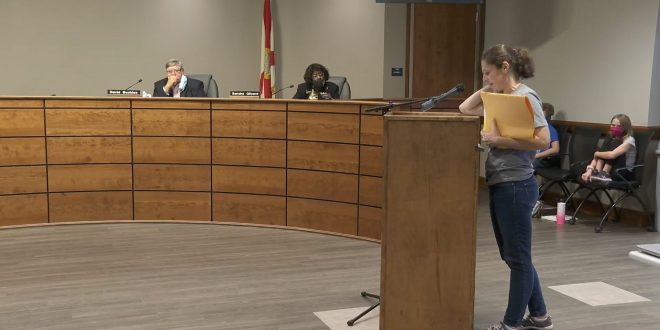 Melrose Elementary fifth-grader Connor Huntley, 10, offered that joyful reaction Tuesday night after finding out that his school wouldn’t be closing.

Cautiously optimistic, the energy from the Melrose community inside and outside the Putnam County School Board meeting room buzzed with anticipation Tuesday afternoon.

Although the community felt that the threat to its school had already passed, it anxiously awaited the board’s decision to approve a new plan that would keep the school open after it faced potential closure.

Others were more desperate as they pled for their schools to be saved, too. Several speakers at the meeting in Palatka implored the district to slow down with its drastic revitalization plan.

The district is tied for second among Florida counties in an ignominious category: those with the oldest facilities in the state. The Putnam County School District in response developed a phased 10-year plan to combat declining enrollment and to build new schools with special state funding for facilities.

The downside? The district would eventually downsize from 18 to 10 schools.

While the goals of the plan remain the same, the original bid was reworked following parent pushback.

The school board passed the updated revitalization plan that will save Melrose with a vote of 3-2.

A rapid effort this past month by the Melrose community to save the elementary school from closure included passionate protests from families, as well as over $30,000 pledged to nonprofit Friends of Melrose Elementary School. The cash would pay for portables to allow students to remain on campus while necessary construction takes place.

Melrose’s voices were heard. The others may have been too late.

There was particularly strong support for Jenkins at Tuesday’s meeting.

“As I listened to the other parents from Jenkins speak, I realized not everybody had the same opportunity that we did to find out right away,” said parent Jackie Huntley, 39, who has been a prominent advocate for saving Melrose after first hearing about the district’s plan. “There were communities that just found out a couple of weeks ago about their school closures. And that goes back to the fact that there really was no communication and no transparency in the beginning of this process, and that’s a huge problem.”

Because of its tight-knit nature, the Melrose community was able to band together and vocalize opposition to the proposed school closing, particularly at a Jan. 12 school board meeting, Huntley said. Parents from other schools found out much later and didn’t have the opportunity to present their cases before the board until Tuesday – the day of the vote.

“How long have they known, and how much more could we have done as a community, all of the communities, to — maybe not change the plan, but — maybe better prepare the communities for it?” Huntley said.

It wasn’t just the community’s outpouring of support that saved Melrose, though, Huntley said. The school wound up in a lucky position as a proposal to move toward a K-6 and 7-12 school model became favored. Melrose was simply in a position to receive the addition of a sixth grade, she said. It also had an astounding 71 students from outside of the district, who, if displaced, likely wouldn’t attend a Putnam County school and would further contribute to the district’s enrollment program and grim finances.

Melrose sits at the nexus of four counties: Alachua, Bradford, Clay and Putnam.

“It’s very bittersweet because it’s a victory for us, but it was so hard to listen to the other parents asking the board to do the same thing that they did for Melrose because it’s not that simple,” Huntley said.

Huntley presented a thick stack of thank you notes from about 150 relieved Melrose Elementary students at the meeting.

Her effort to save the school persisted until the last minute. She continued to urge the community to email the school board members in support of its members voting ‘yes’ to the new revitalization plan. She also delivered an emotional speech at the meeting Tuesday, in which she broke down after discussing her sympathy for teachers.

“Every time I think about the teachers, that’s what really gets my emotions stirred up,” Huntley said. “The kids, of course, too, but more so the teachers because they’re the ones that I have built the relationships with over the years, and to see them passed over really hurts my heart. I know from the relationships I have with them, speaking with them, that they all stayed silent because nobody wanted a target on their backs when you have the district in charge of where you’ll end up, you don’t want to appear like you’re not a team player.”

Melrose resident and creator of Facebook group Save Melrose Elementary Mandy Adkins, 53, has seen her children and grandchildren progress through the Putnam County school system. While Melrose Elementary has consistently been a core part of her family, she was most excited about the vote’s outcome because of her autistic grandson, who previously attended Ochwilla Elementary – the school Melrose would’ve merged with according to the original revitalization plan.

“Had they closed Melrose and sent him back to Ochwilla, my son and daughter-in-law probably would’ve had to found other means of schooling for him,” Adkins said. “It would’ve been traumatic.”

He was physically injured at Ochwilla on a few occasions, she said.

“He’s not very verbal, he doesn’t say a lot, but he will talk about Ms. Tracy, his teacher at school and going to school,” she said. “He loves his school.”

The Melrose Patriots organization is holding a town potluck at Mossman Hall on Feb. 21 to celebrate the rescue of Melrose Elementary.

In a written statement to WUFT, Putnam County Schools Superintendent Richard Surrency said: “The board’s vote today to pass the revitalization plan will represent a significant moment in our district’s future. We will see much progress and growth in our county for years to come. I ask that our community continues to support the district’s plan as we move forward.”