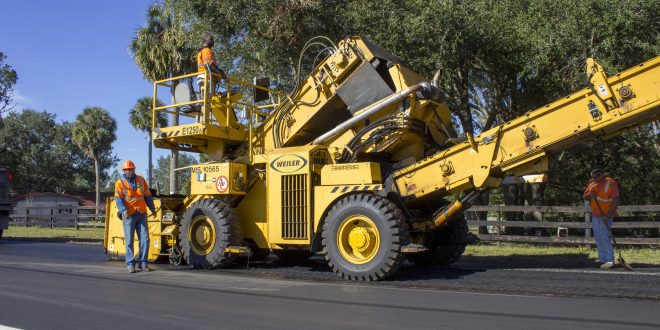 Marion County employees work to repave County Road 42, one of many road projects funded by the Penny Sales Tax. (Photo courtesy of Marion County Board of County Commissioners)

In 2020, 19 Florida counties approved 20 sales and property tax increases that will generate hundreds of millions of dollars in local revenue.

Two of these measures — passed in Alachua and Marion Counties — aim to help generate the revenue needed for essential services in education and infrastructure.

Alachua County voters overwhelmingly approved the renewal of the One Mill Ad Valorem Tax for School District Operating Expenses, with 79% voting in favor, according to the Alachua County Supervisor of Elections.

Alachua County public schools use these funds to support teachers, school counselors, librarians, magnet programs, and music and art programs. It also guarantees a nurse in every school.

Additionally, One Mill is the district’s primary source of funding for school technology and has been used to distribute over 7,000 laptops and 1,000 hot spots to students since the beginning of the COVID-19 pandemic.

One Mill was first enacted in 2008 as a result of the recession and was renewed in 2012 and 2016, Alachua County Public Schools spokeswoman Jackie Johnson said. This renewal will be effective from July 1, 2021, through June 30, 2025.

The tax is more vital than ever as legislators are predicting $16 million in cuts to school funding in Alachua County during 2021, Johnson said. This is because the district has spent millions of dollars on COVID-related expenses, including personal protective equipment and staff training.

Other districts across Florida have followed Alachua County’s lead in asking voters to invest in education, Johnson said. In nine counties, school boards proposed a sales or property tax raise to go toward school operations. All of them passed.

“More and more districts are having to turn to their voters to get the funding they need to keep schools up and running,” Johnson said. “We aren’t getting enough from the state of Florida.”

Education is not the only area in need of funding. Marion County depends on the revenue created by the One Cent Public Safety and Infrastructure Sales Surtax.

During the period following the 2008 recession, the Marion County Commission at the time worked to keep taxes flat, which led to a deterioration of public safety equipment and job losses, County Commissioner Jeff Gold said. The penny tax was created in 2016 to make up for these cutbacks by increasing the sales tax rate to 7%.

“It was successful to help us catch up a bit,” Gold said. “But there’s still a lot more to go.”

A little over 70% of Marion County voters in November elected to renew the One Cent tax for an additional four years, according to the Marion County Supervisor of Elections.

The first four-year term generated an estimated $167 million, according to a report by the Marion County Board of County Commissioners, to fund law enforcement equipment, animal control, fire and first responder facilities, and road projects. The revenue does not go toward any county employee salaries or recurring costs.

The burden is taken off Marion County taxpayers by having the One Cent Tax because 35% of its revenue comes from people who are traveling through Marion County, Gold said.

“If we wouldn’t have had it, we would be in trouble in the next couple of years,” Gold said. “It’d be very difficult for us because we wouldn’t be getting the funding from the state that we usually do.”

Surtaxes are common across the state because of Florida’s tax structure. Florida is one of seven U.S. states that does not have residents pay a state income tax and has one of the lowest tax burdens in the nation.

To make up for this, Florida relies more heavily on local revenue to fund essential services than any other state, according to a 2019 study by Florida TaxWatch, a nonpartisan, nonprofit taxpayer research group. Local governments account for 54.9% of Florida’s total state and local revenue, the highest percentage in the nation.

The threshold for passing local referendums in Florida is only 50%, making it easy to implement surtaxes, Florida TaxWatch President and Chief Executive Dominic Calabro said. Over half the increases on the 2020 ballot were passed with more than two-thirds of the vote and only one countywide increase failed.

The results of the 2020 general election were consistent with the 2018 primary and general elections, where 22 counties passed 26 sales and property taxes worth an estimated $1.5 billion, Calabro said.

In the wake of the economic impact of the COVID-19 pandemic, it was uncertain whether Floridians would still vote in favor of tax increases, Calabro said. Despite facing financial hardships, voters chose to fund government services.

Calabro believes this is because Floridians, especially those out of work, benefited greatly from federal economic relief programs, motivating them to trust local governments more with their taxpayer dollars.

“Floridians, like most Americans, really have a good heart,” Calabro said. “And if you can show them that you’re going to be a good steward with their money, they’re going to give you the benefit of the doubt.”

Surtaxes are being passed all around the state at such a high rate because people want to invest in policies close to their communities, Calabro said. Once citizens believe they’re going to see tangible results with their money, they tend to support it.

“It’s so much easier to say, ‘we’re going to take your money and promise you that we’re going to do good things with this,’” Calabro said. “So now the real work is that public officials have to honor that.”

Jordyn is a reporter for WUFT News who can be reached by calling 352-392-6397 or emailing news@wuft.org.
Previous ‘Campus Carry’ Issue For Florida Colleges and Universities Re-Emerges For 2021 Legislative Session
Next ‘The Rigor Gap’ Study Suggests Florida Students May Be Falling Behind