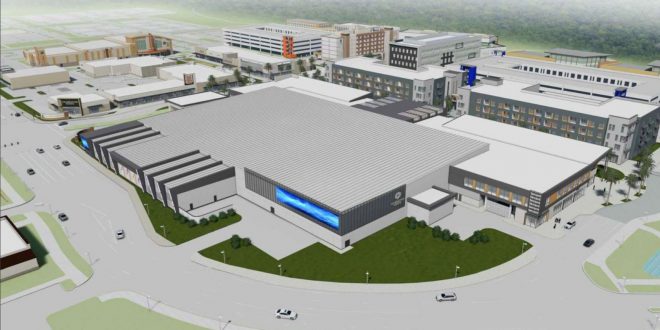 The pitch that Alachua County has received for a sports events center at Celebration Pointe claims it will help fill gaps in the area tourism calendar when there aren't Gator football games and other large events. (Rendering courtesy of Alachua County)

The idea for this location — first floated a little over a year ago — has seen its share of controversy in reaching this point, but on Tuesday, the commissioners were all in.

“I know the community has been looking for something like this for a long time,” Commissioner Ken Cornell said.

The push for such a venue started within the past five years, said Deputy County Manager James Harriott. It emerged at a time when the University of Florida’s O’Connell Center was under renovation, at which point Harriott said people around the community realized there was no other indoor sports venue in Gainesville.

This prompted county commissioners to start searching for locations to put a sports venue. Places like the Waldo Road corridor and Citizens Field, the Cabot-Koppers Superfund site, and even downtown Gainesville emerged as suggestions.

“I know that the community has asked a lot of questions about downtown and locating a sports venue downtown,” Harriott said, nodding to the desires of people like Gainesville City Commissioner Adrian Hayes-Santos. “And it’s not that it’s a bad idea, but there is not a parcel large enough to place this type of facility.”

The most recent study from a county-hired consultant asked questions about the venue location that would be key to its success:

Out of the study came the idea of a venue at Celebration Pointe, after which the development district’s board of supervisors responded by submitting an unsolicited proposal to the commission. The commission evaluated and adjusted the proposal, and then approved to move forward with the next steps.

Those steps would be to discuss with Celebration Pointe how the operations work, land rights, parking, finances, risks and more. The facility would be county-owned, Harriott said. There would be significant community and financial benefits through the tourism gap the venue would fill, he said.

The commissioners agreed to enter the term sheet, but no set budgets have yet been negotiated. That comes next, said County Commission Chairman Robert Hutchinson.

“This isn’t committing anything,” he said. “It is saying, ‘Bring back a deal,’ so we can all look at it.”

Jessica is a reporter for WUFT News who can be reached by calling 352-392-6397 or emailing news@wuft.org.
Previous Eta Weakens To Tropical Storm; Surge Warnings Continue
Next The Point, Nov. 11, 2020: Tropical Storm Eta Turned Our Way Overnight