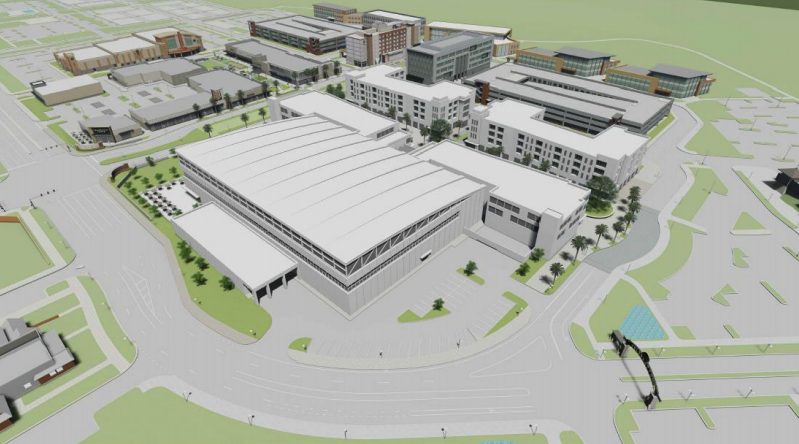 An image of the north view of the proposed sports center in Celebration Pointe rendered by the county’s hired consulting firm. (Courtesy of Victus Advisors)

The Alachua County Commission received an unsolicited proposal for a public-private partnership regarding the $40 million multi-purpose sports venue that generated debate between the city and county commissioners at the end of last year.

The commission announced in a media release at noon Friday that the proposal is “sufficient for consideration,” but the county will consider other developers’ proposals.

James Harriott, deputy county manager, said the project is in a “waiting game” until the advertisement period is over on Oct. 21 at 5 p.m. The proposals will be ranked by the county commission in order of preference, according to the media release. The board is waiting due to state statutes that require at least three weeks of advertisement, said Harriott. If no other developers submit the necessary arrangement, the project will move forward to the county commission for approval in November.

Last year, the consulting firm, Victus Advisors, suggested Celebration Pointe to the commission as a home for the sports venue. The funding could partially come from the development tax. Other funding discussed was a bed tax, a fee imposed by local governments on hotel stays within the local government jurisdiction. The sports complex would contribute to the collection of the bed tax as it would draw in more hotel stays. Victus Advisors estimated the sports venue could generate over 116,000 annual hotel night stays in Alachua County.

COVID-19 caused a statewide drop in tourism, but Harriott said while the reduction in hotel stays could impact the project’s funding, it’s not likely because the project is still in initial stages.

“We can’t look at it in the eyes of the last six months; we have to look into the next 20 years,” he said. “Hotel stays hopefully will come back.”

It could be a long time before Gainesville residents can watch a volleyball tournament at the multi-purpose sports venue. According to Harriott, there is no projected timeline for construction, but it will take about a year to design and another 18 to 24 months to build the facility.

Alachua County commissioners will have the final say in November on whether the project will move forward.

Melissa is a reporter for WUFT News who can be reached by calling 352-392-6397 or emailing news@wuft.org.
Previous Sept. 15, 2020: Morning News In 90
Next Free COVID-19 Testing In Southwest Gainesville This Saturday