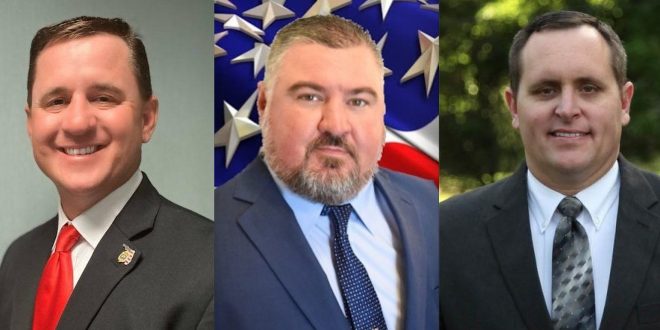 From left to right, Darby Butler, Jamey King and Nicholas Hatcher are vying to become Dixie County Sheriff. (Photos courtesy of the campaigns)

All three candidates have a lot in common: They are Republicans but running with no party affiliation for this office, are lifelong Dixie County residents and have never before held public office.

Despite these similarities, each candidate has their own unique experiences and vision for the sheriff’s office future.

Here is what Dixie County voters need to know about each candidate before casting their ballot.

Butler could not be reached for comment after WUFT News emailed him twice and left him two voice messages.

The 46-year-old is the only candidate on the ballot with 25 years of consecutive experience in law enforcement, according to his campaign’s Facebook profile.

Butler has experience working in federal, state and local law enforcement. He also began with the Florida Department of Corrections before transitioning into a job as an enforcement officer for the Florida Fish and Wildlife Conservation Commission in Dixie County.

In 2006, Butler joined the North Central Florida’s Special Operations Group, where he served on special assignments like providing protection for the Governor’s inaugural events and partnering with Homeland Security’s Immigration and Customs Enforcement for joint task force details.

In addition to working in law enforcement, Butler had a second career working as a supervisor for a construction company to help supplement his family’s income, he wrote.

Hatcher, 39, is the son of the retiring sheriff, and his grandfather and great grandfather were both Dixie County sheriffs, too.

For the last 12 years he has worked at the Cross City Correctional Institution. In his most recent position as Classifications Supervisor, Hatcher handled a budget of about $3.2 million and oversaw 250 employees and 1,700 inmates.

Managing people is what sets Hatcher apart from the other candidates, he said, and he has insight into the current sheriff’s office structure and could ask his father for advice if elected.

“I feel like he’s done a great job; the county has elected him five times. But I do see room for improvement,” Hatcher said. “I believe any organization, and any person, can always improve.”

Dewey Hatcher has publicly endorsed his son for the position.

The candidate does have two misdemeanors on his record: one filed in 1999 for attempting to hunt a wild deer at night with a gun and flashlight, and one filed in 2001 for a noncriminal traffic infraction, according to court records.

Regarding his first misdemeanor, Hatcher said he was driving with a friend late at night when they pointed a flashlight at a deer, which is illegal under Florida Statute 379.404. It’s known as “shining,” a practice that temporarily blinds or stuns animals, making it easier to kill them.

Hatcher got pulled over by a nearby officer who saw the incident and discovered a gun in the car. He said he has never hunted at night, kept driving after they saw the deer, and was not holding the gun when the light was pointed.

“It’s something I’m not proud of and it definitely doesn’t represent who I am,” Hatcher said. “I think that most people who know me and my wife and my three girls know that we are really good people.”

King, 39, began his law enforcement career as a correctional officer with the Florida Department of Corrections 20 years ago.

Then-Sheriff Sammy Woodall hired King in 2004 as a full-time Dixie County deputy. He worked under the current sheriff in various roles including K-9 officer, patrol supervisor and narcotics unit member. In 2007, Hatcher named him “Law Enforcement Officer of the Year.”

King believes his extensive experience working in the sheriff’s office separates him from the other candidates.

“I think it’s really impossible to lead a bunch of guys into change, especially during a period of transition, if you’ve never actually worked that job before,” King said. “With my experience, I can immediately hit the ground running. I’m not going to be a sheriff in training.”

King said he is friendly with his opponents and believes that everyone has done a great job running clean campaigns and focusing on the good of the community.

“We live in a small town, you pretty much know everybody,” King said. “I grew up with these guys. They’re my friends, and we all have to live here in the end.”

During 2019, despite the county population only increasing by 1%, total arrests went up 35% and the violent crime rate increased 18% from the year prior, according to the Florida Department of Law Enforcement. The report notes that in small counties with low numbers of crime, a small increase in crime can cause a large percent change.

All three candidates plan to target illegal drug use within the county by expanding the narcotics unit. The three candidates also plan to partner with local, state, and federal law enforcement agencies to help reduce the number of repeat offenders.

They all support increasing the number of patrol officers available to help cover more area and say they will have an open-door policy for residents and officers to speak with them as well.

King has crafted a detailed plan of action if elected, which can be found on his campaign website.

In order to make these changes with the county’s small budget, King said he will try to save money by changing the uniform material and obtaining surplus equipment from various federal agencies.

Regarding police brutality, King said for the most part everyone in Dixie County gets along and this is not an issue. However, if violence broke out, he would swiftly deal with it.

“I oppose racism in any form, and I think there’s no place for it in society,” King said. “We’re lucky that we live in a small community where we don’t have the problems of the bigger cities.”

Hatcher’s plans include expanding the K-9 unit, which currently only has five dogs; offering rehabilitation for residents with drug addiction; encouraging officers to talk with citizens on patrol; and implementing body cameras.

On police brutality, Hatcher said getting body cameras is a crucial part of upholding accountability and transparency. He also hopes that by building positive relationships between his officers and residents, the chances of racial discrimination will decrease.

“There are bad deputies unfortunately everywhere, just like there are in every other profession,” Hatcher said. “I love our Black community just like I love our white community, and so at the end of the day, I want everybody to get home safe.”

Once in office, Hatcher first plans to sit down with every employee to discuss his expectations for his term and to get feedback on what can be improved, he said. He will give every employee a fair chance to prove themselves.

Butler wants to protect the health and well-being of officers by providing training program opportunities, equipping all employees with appropriate uniforms and gear, promoting based on merit, and offering a competitive salary, he wrote on his Facebook page.

“No one is above the law, and no one is beneath the law,” Butler wrote.

Jordyn is a reporter for WUFT News who can be reached by calling 352-392-6397 or emailing news@wuft.org.
Previous Man Pleads Not Guilty To Felony Charges Of Altering Voter Records Of Florida Governor
Next Alachua County School District Bus Giveaway Uplifts Area Churches And Nonprofits