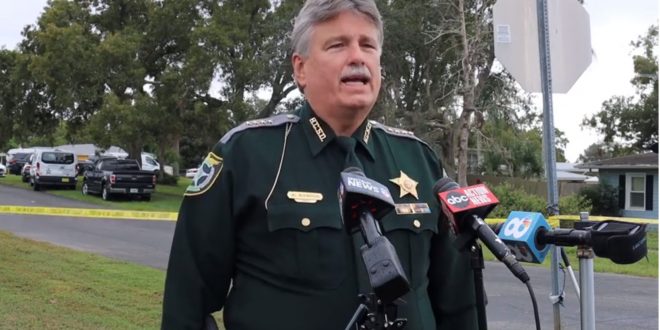 James Collins came out of the house around 1 a.m. Wednesday, holding a rifle with a flashlight and ammunition magazines taped to it, Hernando County Sheriff Al Nienhuis said during a news conference.

Nienhuis said Collins may have wanted to provoke a shootout, making comments such as “‘I’m not going to go back to prison,’ and, ‘You’re not going to take my weapons.’”

“I guess we’ll never really know what his true intentions are,” Nienhuis said.

Neighbors around the home were evacuated during the standoff, which began as a domestic situation.

The deputy who fired the shot was on “overwatch” duty, protecting the arrest team. He fired a single fatal shot when Collins scanned the front yard with the rifle and “maybe even fixated a little on our arrest team, obviously putting their lives in danger,” Nienhuis said.

The Florida Department of Law Enforcement is investigating. The deputy has been placed on leave pending the investigation.

When deputies responded to a domestic dispute call, they found that a blood relative had been battered and was bleeding, but declined medical treatment. The sheriff didn’t release further details about them, citing Marsy’s Law, a voter-approved amendment to the Florida Constitution meant to protect crime victims.

When deputies tried to make contact with the other person at the house — later identified as Collins — he responded by barricading himself.

A hostage negotiation team tried to persuade him to surrender, but he was mostly irate and irrational, the sheriff said.

The Associated Press is a wire service to which WUFT News subscribes.
Previous Florida Secretary Of State Laurel Lee Blasts Attempt To Scuttle Constitutional Amendment
Next Not Just Florida: Voters In Alaska Also Receive Emails Warning ‘Vote For Trump Or Else!’