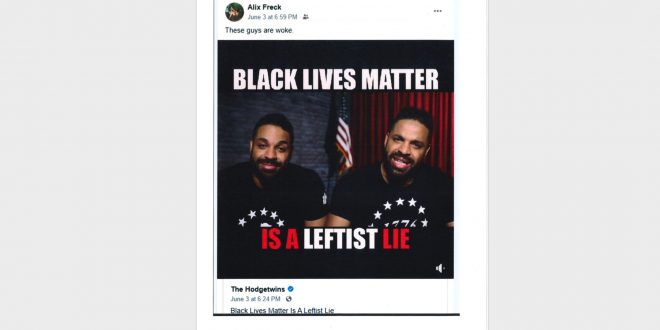 Update, Aug. 2, 2021: Federal judge Allen C. Winsor dismissed Alix Freck’s case in May after she reached a settlement with the Alachua County Library District, according to court records. The parties agreed to the settlement after a mediation proceeding.

Original story, Oct. 20, 2020: A former Alachua County Library District employee has filed a federal lawsuit stemming from her demotion after she posted on Facebook her views against the Black Lives Matter movement.

“These guys are woke,” Alix Freck, 31, a senior branch manager with the district, wrote June 3 above an image of two YouTube content creators who are Black and calling BLM a “leftist lie.”

Commenting on a post from a friend and coworker the next day, Freck, who is white, said “the problem” is BLM “only comes out when someone is killed” – and “no one is actually standing up for change in the form of action other than parading around and feeding into violence.”

Her views did not sit well with at least some colleagues at work.

“Alix, what you’re saying is very problematic and endemic of the white privilege that underpins a lot of the issues being discussed right now,” Ashh Albinson replied hours later in a comment beneath Freck’s response to their coworker’s post.

After Freck replied with an apparent reference to a white man participating in BLM marches, Albinson said she wanted to “reiterate that you have so many privileges as a white woman that you may not fully appreciate how lucky you are to not need to protest or riot to feel heard.”

Albinson added that Freck should “perhaps consider stepping down from your position of institutional power to allow someone who is more enlightened than yourself to empower others.”

Freck, who had been a district employee since 2012, was unapologetic.

“Perhaps I should leave my job because I don’t think entire communities should be destroyed and more innocent lives lost,” she replied in her next comment. “Maybe you should instead accept that not everyone feels the same as you.”

The next day, June 5, another coworker, Damien Jones, posted on Facebook his dismay that people may be legally allowed to carry a grenade launcher into a fast-food restaurant.

“In what scenario does a citizen need one of these?” Jones asked.

“Oh pick me!” Freck – who had also previously made Facebook posts and comments regarding her views on firearm ownership and use – commented five hours later. “For when the government tells you you have to shut down your business, takes away your livelihood … That’s when you need the ability to fight back against corruption.”

Freck’s posts were reported to her supervisors. The manager said she was told she would not be punished, but was later demoted two positions to librarian and transferred to a different location.

She soon resigned and then filed a lawsuit in U.S. District Court in Gainesville on Aug. 27, accusing the district and four administrators of violating her First Amendment rights. The lawsuit alleges that a public employer cannot punish a worker for free speech made as a private citizen.

“It’s very upsetting to me that especially librarians that I know at my workplace are promoting censorship, which is the exact opposite of what librarians should be doing,” she told WUFT News.

The district was unaware of Freck’s claims that it violated her freedom of speech until it was served with the lawsuit, said Rachel Cook, the district’s public relations and marketing manager. Cook said the content of Freck’s posts had nothing to do with the action taken.

“We deny her allegations and will defend the suit,” Cook said.

The Florida Library Association supports what its president called the district’s efforts to ensure antiracist behavior is promoted through its libraries. The president, Laura Spears, of Gainesville,  said it was a focus of her presidency and applies to anyone experiencing discrimination.

“People can say whatever they want on their social media pages,” said Spears, who is also director of assessment and user experience for the George Smathers Libraries at the University of Florida. “However, there are consequences for all kinds of speech, and I think that we have to accept that as well.”

Spears signed a statement on the association’s website following the deaths of Black people killed by police and others accused of racial bias. The organization plans to continue its services while also uplifting its communities through intentional action, her statement said.

“While we often understand that libraries should be neutral organizations, that taking a stand is not appropriate, there is no neutral here,” the statement added. “Constant terror, discrimination and exclusion of people based on race is not a political argument.”

Livingston and Morant told Freck on June 8 that coworkers were upset about the post and comments, and that they had referred the matter to the district’s legal team, the lawsuit states.

Freck said she deleted her Facebook account after the two directors told her to not post anything on it. She added that they also told her at that meeting that she would not be disciplined.

On June 23, Freck met with Young and West in addition to Livingston and Morant. At this meeting, the four women told her she was being demoted; she resigned the next day, Freck said.

Freck said she believes the situation was handled dishonestly and unfair.

“As long as it is not derogatory, harmful, we should be allowed to express our opinions, and one side should not be silenced simply because others do not agree with it,” she said.

Freck said she thinks the district should have addressed the complaint about her, but that it also should have also considered her prior work performance. She said she does not think her personal beliefs expressed away from work should detract from her professionalism at the office.

Freck described the coworker who created the post as a friend with whom she often discussed politics, and noted that other coworkers also make political statements on social media. Freck insisted she was neither on library property or using its accounts or internet access when she made those comments.

Albinson and Jones declined to comment when contacted by WUFT.

In her lawsuit, Freck called on the library district to “permanently revise” what she describes as a “vague and overbroad” social media policy. The lawsuit said the policy allows “authorities to impose discipline upon an employee for conduct that violates state and federal law as well as conduct that is not in line with generally accepted professional/ethical standards, conduct that represents ACLD negatively and conduct that would disrupt library operations.”

The lawsuit also states that Freck is asking the court to order the defendants to put a corrective statement in her file, to refrain from punishing other library district workers based on constitutionally protected free speech, and to award her unspecified monetary damages.

Freck’s views on gun rights were known throughout the library, but she did not discuss politics there, said a coworker who requested anonymity in order to not jeopardize their work status.

“She may have conservative beliefs outside of work,” the coworker said, “but she has never, as far as I’ve seen, brought them into work.”

The coworker described Freck as personable and professional and a great manager. Referring to her social media posts in June, the coworker added, “It definitely is not reflective of the direction that society is moving, and it doesn’t reflect how I’ve seen her interact with people at work.”

Calling the demotion “unnecessarily harsh but not entirely wrong,” the coworker said Freck would not have problems with her staff if returned to the job of assistant branch manager, that is, the one between senior branch manager and librarian.

Hope is a reporter for WUFT News who can be reached by calling 352-392-6397 or emailing news@wuft.org.
Previous It’s 2020, And Rolling Hills Residents Can’t Get Wi-Fi
Next FBI Investigating Threatening Emails Sent To Democrats In Florida