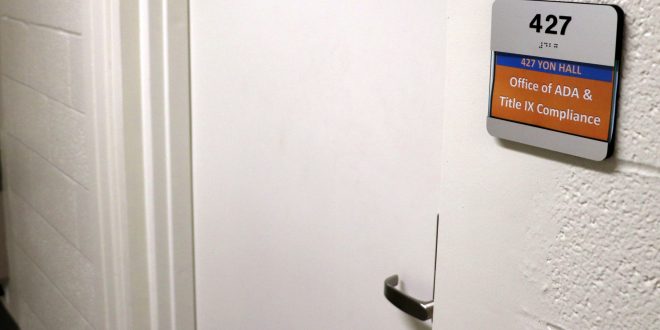 The Office of ADA and Title IX Compliance in Yon Hall, where University of Florida officials begin the process of addressing allegations of sexual assault. (Lauren Witte/Fresh Take Florida)

Caroline Pope, who says she was raped by two men at a fraternity’s Christmas party, can never look at holiday lights the same way again. She’s haunted by flashbacks and sleepless nights, and Charlie Brown is a burning reminder of the Snoopy sweater she was wearing.

Pope, a 22-year-old sociology senior at the University of Florida, submitted a detailed written description of her assault – anonymously – to one of a new series of Twitter survivor accounts emerging around the United States, intended to empower victims and warn fellow classmates.

The accounts republish the victims’ statements, shielding their own identities even as many of the posts include the names of purported assailants, photographs, locations and graphic descriptions of assaults.

Pope took the unusual step last month of going public and identifying herself openly as the victim in her story: “Screw it, this is my experience,” she wrote.

“I wanted people to learn from this,” Pope said in an interview. “I wanted to show that this could happen to anybody.”

The survivor accounts – which explicitly encourage victims to identify their assailants – have emerged on scores of college campuses across the United States since earlier this summer, including at Florida State and the universities of South Florida and Central Florida. It is unclear whether they are part of a coordinated campaign, as the identities of those operating them remain a carefully cultivated mystery.

The anonymity afforded in publishing the graphic descriptions of horrific assaults empowers victims by allowing them to describe their experiences apparently without repercussions. But there is a dark side, too: Even administrators of the accounts acknowledge there is no way to authenticate anyone’s submissions, even those who identify by name people they say attacked them.

“We believe you if you say #metoo. We don’t need to have proof or details,” one tweet said. Still, another tweet added: “We do not support false accusations.”

In at least one University of Florida report, a freshman victim accused a man by name who she said persuaded her to have sex in his apartment after a night of drinking – but there were at least six current and former students with the same name. More than 12 hours later, a new post was added that included a photograph of the man she accused of raping her.

“To ensure blame isn’t placed on the wrong person, we asked the victim to distinguish which one,” the account tweeted.

The man, who now works in real estate elsewhere in Florida, did not respond to three calls and three texts and an email over two weeks to discuss the accusation.

In Pope’s case, she identified by their first names two men she said sexually assaulted her in separate attacks while she was drunk during a 2017 party at a Zeta Beta Tau house near campus. “I was too drunk to do anything and he was strong and we were alone,” she wrote.

The current fraternity president, Ethan Curtis, said the two men were expelled from the fraternity after Pope’s allegations, which she chose not to report to police. Curtis said the fraternity now requires all reports of sexual assault to go through a “governing process,” such as being reported to the university’s Title IX office or local law enforcement.

“We’re not doing this because we want to clear our name,” Curtis said. “We’re doing it because it’s the right thing to do and because it’s a serious issue.”

Cynthia Conlin of Orlando, a lawyer who specializes in defamation and privacy, said false accusations could end up in court. Purported anonymity can be defeated by subpoenas to Twitter or other technology companies to identify those behind the survivor accounts – by revealing Internet addresses, phone numbers or email accounts associated with the efforts.

“Sometimes people have different layers of anonymity, but eventually it’s like peeling an onion to figure out who it is,” said Conlin. She added: “I would caution anyone who’s thinking of publicizing someone’s name to not do so because they could be opening themselves up to liability or a lawsuit.”

Even leaving out a person’s name might not be enough to avoid a lawsuit, Conlin said. If an accusation includes enough details to identify a person who was falsely accused, that person could still sue in civil court for defamation, she said.

Under U.S. law, even defamatory statements about a small group of distinctive people – such as freshmen members of a fraternity – may be specific enough to support a civil judgment.

A reader complained last month that some posts included current places of employment and law schools where some alleged rapists were attending, calling it “too much” and warning, “there could be real-life consequences like firing and expulsion.” The @SurvivorsUF account responded, “We don’t care. Believe survivors.”

People operating the accounts at Florida State and the universities of South Florida and Central Florida did not respond to messages sent directly to the social media accounts. The account administrators for @SurvivorsUF said they have been consulting informally with an attorney but declined to identify the lawyer.

Pope said she hopes telling her story can help others.

“I wanted people to know it was me, but I was afraid,” she said. “I realized I was scared but I knew the good that would come from sharing my story would outweigh any potential repercussions.”
___
This story was produced by Fresh Take Florida, a news service of the University of Florida College of Journalism and Communications. The reporter can be reached at mhernandez@freshtakeflorida.com

Melissa is a reporter for WUFT News who can be reached by emailing news@wuft.org or calling 352-392-6397.
Previous The Point, Aug. 20, 2020: Florida Primary Election Turnout Was The Highest In Nearly Two Decades
Next The Point, Aug. 21, 2020: Anonymous Accounts About Florida Campus Sexual Assaults Could Have Legal Implications