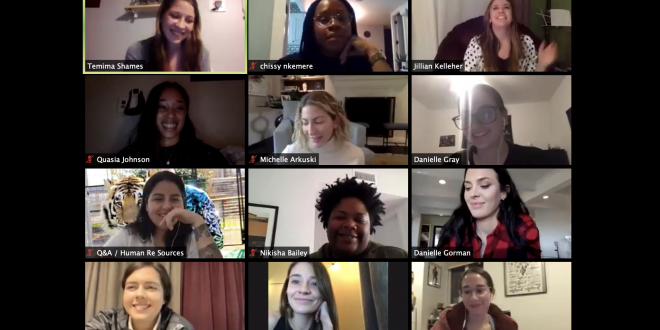 Lola Romero, a recording and mixing engineer for Aftermath Entertainment in California, spoke about the journey that led her to win three Grammy Awards in a male-dominated category.

Jordan Kasedy, director of marketing for dance and electronic at Create Music Group in Los Angeles, explained how her career began with an internship that she got by using social media.

Jillian Kelleher, founder of Connector Entertainment Group in New York, talked about once being at a company where she was the only female employee within eight floors of the building.

They shared their experiences during “Women PowHer Music,” a week-long speaker series witnessed virtually on Zoom by more than 200 people and organized by two college students: Danielle Gray, 20, a junior marketing major at the University of Florida, and Temima Shames, 21, a senior music business major at State University of New York-Oneonta.

“We wanted to do something different and have an all-female panel – and talk about things that everyone is thinking about in the industry, but they won’t necessarily say it to their face,” Gray said. “Maybe because we’re behind a computer, everyone’s more likely to be more transparent.”

Each night last week featured multiple speakers discussing a different topic relevant to the industry: breaking barriers, touring and events, marketing, publicity, and success and stereotypes. Women looked on from across the United States as well from the United Kingdom, Gray said. She’s from Boca Raton but remains in Gainesville while UF students are taking all classes online.

Gray and Shames met while interning at Atlantic Records in New York last summer. Gray worked in international marketing and promotions; Shames in sales and streaming.

When they first discussed doing the event earlier this month, they imagined one small panel. It became a series after they considered how many different careers there are in the industry. They got mentors they have worked with to help connect them with the women who became panelists.

They all used social media, word of mouth and their respective networks to promote the event.

“Relationships is such a common theme within the music industry, whether it be in publicity or marketing or whatever,” Shames said during one of the sessions.

Each conversation focused on giving advice to those trying to get into the industry, with the panelists discussing challenges they have faced and how to overcome them.

Romero is no stranger to challenges. A day after one of the most special recording sessions she had ever done, she was diagnosed with multiple sclerosis last year, she said.

Danielle Gorman, a co-founder of Women Music and Tech in California, spoke about being taken seriously.

“I had a boss that used to call me the ‘office wife,’” Gorman said. “I would stand up for myself at all times and wouldn’t allow it.”

Elisa Kupelian, director of communications at Donovan Public Relations in New York, said she signed her first artists on her own at age 23, yet people still questioned if she was too young.

“It doesn’t matter your age – publicity is in your bones,” Kupelian said. “I do believe that. You either have it or you don’t.”

Chissy Nkemere, senior director of streaming marketing at Concord in New York and chair of the diversity and inclusion council for Women in Music, spoke of her unusual path. A daughter of Nigerian parents, Nkemere listened to country music when she was younger, started her career in finance and worked at a rock and metal label for her first job in the industry.

Her message: Define who you are. Don’t let anyone else do it.

“Every room I enter, I enter as a black woman,” Chissy said. “I’m proud of that, and that is how I see myself – and I want people to see me in that way, too.”

Gray said she and Shames have struggled with being taken seriously as well when it came to organizing the speaker series, including misconceptions that it was just a homework assignment.

“It wasn’t a side project,” Gray said. “We decided not to partner with any of our schools because we wanted this to be something ourselves, so now we can carry on once we graduate.”

The panelists also spoke about working during COVID-19 as well as what’s new in the industry.

Samantha Strum, an international marketing and promotions assistant at Atlantic, said she has never attended more marketing meetings than in recent weeks.

Quasia Johnson, a project manager at Cinematic Music Group in New York, said people within the industry, including the artists, will have to be more innovative after the pandemic is over.

“I don’t think people are going to be tired of consuming everything online,” Johnson said. “This is going to be a new normal.”

Gray said she and Shames intend to organize in-person events after COVID-19.

“I don’t think I’ve ever had so many positive messages on LinkedIn ever; even people from different countries are tuning in,” Gray said. “I got a message the other day saying, ‘You guys inspired me to make my own event.’”