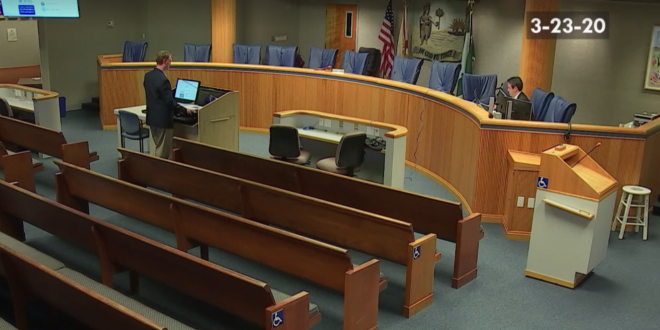 A new partnership between Santa Fe College and the U.S. Army Reserve was announced on Monday night at an online forum. The program would provide training and education for the employees of a proposed U.S. Army Reserves Equipment Concentration Site in Alachua County.

Sean McLendon, strategic initiatives manager for Alachua County, led the surreal event from the county administration building, where no one from the public was permitted due to the coronavirus outbreak.

“A facility like this would have maintenance facilities,” he said in touting the facility’s potential, “and they are typically state of the art and offer opportunities for vocational and trade school jobs.”

Officials at the meeting, which was aired live on Cox Cable Channel 12 and streamed on the county’s video on demand and Facebook page, explained the purpose of an Equipment Concentration Site, outlined the economic impacts the site would have on Alachua County and answered questions submitted by the public prior to the meeting and on Facebook Live.

According to information provided by the county, in 2018, the U.S. Army Reserve approached the county with a plan to build an Equipment Concentration Site at the Fairgrounds Redevelopment Area by January or February 2021.

The Fairgrounds Redevelopment Area, located on Northeast 39th Avenue near the Gainesville Regional Airport, is an industrial area that is surrounded by correctional institutions and has “good highway access,” McLendon said. The area would be donated by Alachua County to the U.S. Army Reserve and would not be subject to property taxes since the U.S. Army is a government agency.

Jeff Johnson, director of Public Works for the U.S. Army Reserve 81st Readiness Division, said, the division provides support and services through Equipment Concentration Sites for over 200 other U.S. Army Reserve location in the Southeast and Puerto Rico.

“An ECS is a place where units can park all of the equipment that they can’t fit or properly maintain at their home locations,” he said. “An ECS is an entirely civilian operation because there are no military personnel assigned there.”

“The site would provide for the storage and maintenance of generators, trucks and other kinds of Public Works-type non-combat vehicles,” McLendon said.

In order to assess the economic and employment effects of a U.S Army Reserve Equipment Concentration Site, the county hired the Economic Impact Analysis Program at the University of Florida to write a report.

Christa Court, a UF assistant professor and director of the Economic Impact Analysis Program, presented a preliminary draft of the results during the forum.

According to the presentation, the proposed Equipment Concentration Site would have indirect and direct economic impacts on Alachua County.

“This proposed ECS would be mindfully making local purchases within the community as well as providing jobs for residents, who would then spend their income within the local community,” Court said.

According to the report, The U.S. Army Reserve would spend $36 million to construct the facility. In the process, 316 construction jobs, which would last between 12 and 16 months, would be created in Alachua County.

When the site is operational, the project would provide 60 new technical jobs in Alachua County specifically in two sectors: the automotive and maintenance, and commercial and industrial machinery repair and maintenance. The U.S Army Reserve would spend $2.9 million in annual payroll.

In addition to Alachua County, the Equipment Concentration Site has an economic impact on the state of Florida. There would be an estimated 469 short-term jobs created in Florida during construction. At least 80% or almost all the economic activity is occurring in Alachua County and the remainder occurring outside is within the rest of the state of Florida, Court said.

Other sectors that will be impacted by the Equipment Concentration Site include wholesale trade, retail, real state, service to buildings, health services and restaurants.

The final report and an updated slideshow will be available in April, once it is completed by the Economic Impact Analysis Program.

The Army Corps of Engineers has been responsible for preparing an environmental impact analysis, but it was not available at the time of the forum, Johnson said. The county will be notified when it has been completed and the public will be informed and given time to comment on the analysis.

A dozen or more interested residents would typically attend such an event in person. During the live stream on Facebook, which was watched by 110 people, Candace Chambers asked whether the county had a plan for events, such as the Hoggetown Medieval Faire in January and roller derby practice, that could not move to the new Newberry location.

“They become dispersed into the community,” McLendon said. “At least the ones the county is responsible for do have a home, and those agricultural events will have a place in the community, so we’re not losing them.”

Even though the plan has not been approved by the county, the design process for the Equipment Concentration Site has begun, Johnson said, and “the Army Corps of Engineers will be administering that construction contract.”

During the live stream on Facebook, county resident Mark Murton said, “Does the army anticipate a separate construction management contract during the construction phase?”

The Army Corps of Engineers, Johnson said, has “a very robust construction management capability and they were going to handle that themselves.”