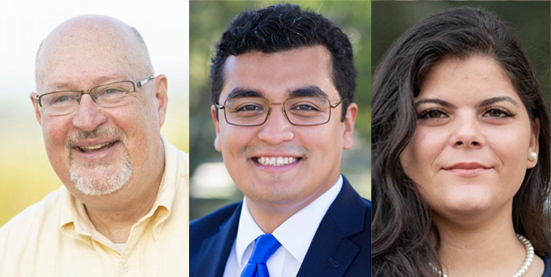 From left: District 2 winner Harvey Ward, District 3 winner David Arreola and At-Large 2 winner Reina Saco will represent Gainesville residents on the city commission once election results are finalized this month and they're sworn in later this spring.

The results are unofficial and will need to be certified during the March 27 meeting of the Alachua County Canvassing Board.

Saco won the At-Large 2 seat over candidates Scherwin Henry, Gabe Kaimowitz and Paul Rhodenizer with 51% of the vote, narrowly avoiding a runoff election that would have been held April 28. Henry came in second with 31%. Saco’s term runs until January 2025.

The city is moving to August elections beginning in 2022 with voting for the mayor’s seat, as well as Districts 2, 3 and 4. It’s a move expected to improve perenially abysmal turnout; Tuesday’s turnout total of 26% was the highest since 2016 when almost 40% of registered city voters elected Poe mayor. Poe won reelection in last year’s off-year election with less than 13% of the vote.

A cloud hung over the day’s in-person voting, though, with the coronavirus global pandemic growing in Florida. Ward spoke of it after his victory.

“The most important thing in front of us right now is making sure that we have all the tools to be supportive during this COVID-19 crisis,” he said, “and that we make good choices moving ahead to deal with the economic impacts of it for what will be months and years into the future.”

Saco promised her early assistance, too.

“I’m going to keep monitoring what our city is doing right now with the pandemic to make sure that we are addressing the members of our community most at need,” she said, “but also just keep vigilant until I’m sworn in in May and be as involved as I can until May.”

Arreola said he already has in mind those he was just re-elected to serve.

“How do we address the recovery? This is going to hurt a lot of people,” he said. “We’re going to have some really hard times, but we’re going to make it. We’re resilient.”

Original post, March 17 at 7:26 p.m.: Polls closed at 7 p.m. with unofficial results scheduled to begin appearing shortly thereafter from the Alachua County Supervisor of Elections Office. They are visible below.

Read our preview of the races here.

Ethan is a journalist at WUFT News. He's a Pennsylvania native who found a home reporting Florida's stories. Reach him by emailing emagoc@wuft.org or calling 352-294-1525.
Previous Bars Ordered To Close, Universities To Continue Online Classes
Next Florida Schools Will Stay Closed Through April 15 Because Of Coronavirus