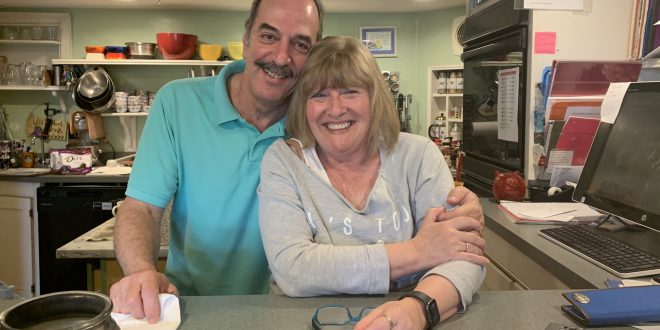 Joe and Cindy Montalto own the Magnolia Plantation Bed and Breakfast Inn. They have lobbied for tighter controls of Airbnb and other short-term vacation rentals in Alachua County. (Emma Davis/WUFT News)

Cindy and Joe Montalto, 65, feel like they have started to win their battle with the internet.

The owners of Magnolia Plantation Bed and Breakfast Inn were successful in their fight to defend their B&B against short-term vacation rentals like Airbnb and VRBO. As of June 2019, Alachua County has collected a 5% tourist tax from over 140 short-term lodging renters.

The incoming revenue follows years of negotiations between Airbnb company representatives and the Alachua County Tax Collector’s office that ultimately did not result in a deal. Instead, hosts — and not the online platform companies — are required to remit the taxes to the county themselves.

And while the tourist taxes have begun to accrue in county coffers, with over $90,000 paid to the Tax Collector’s office since June, some renters have yet to pay. Of the 267 short-term vacation rentals county officials say they have identified in the Gainesville area during the past year, 120 of them have yet to register to pay their taxes.

Not only have those renters yet to pay their taxes, Cindy Montalto said they’re also continuing to rent without licensing, outside of government regulation.

The renters can register and remit their taxes through an online system called TouristExpress, said Jessica Hurov, the county’s tourism development manager.

Last spring, when the idea was first introduced, Hurov said that Visit Gainesville, the county’s tourism arm, “saw it as leveling the playing field between traditional lodging providers and the online providers.”

Hurov said in addition to TouristExpress, the county partnered with a company that identifies vacation renters within a certain area. Host Compliance, for which the county paid an annual fee of about $18,000, helped identify the 267 short-term rentals in Gainesville, Hurov said.

She said the collector’s office sent three letters to each of these residences to make renters aware they need to register. The next step is to have tax-collecting agents go door to door.

In addition, Hurov said other suggestions for regulating internet-based renters have been made to the county, like enforcing a landlord licensing system — similar to that of traditional renters — and requiring the submission of a guest parking plan for all renters. Both suggestions, Hurov said, have not gotten traction so far within Gainesville city limits, where the majority of properties are located.

This isn’t exactly the level playing field the Montaltos imagined.  Originally, they advocated that inspections and licensing for internet-based renters be similar to that of traditional renters.

“It hasn’t turned out quite the way I wanted, considering I spent a year of my life that I’ll never get back,” Cindy Montalto said.

“Nobody’s allowed in my kitchen unless they have a food safety license,” Montalto said.

Florida law requires traditional lodging businesses like hotels or B&Bs to comply with licensing and inspection regulations, but it does not do so for internet-based renters. And two pieces of state legislation — Senate Bill 1128 and House Bill 1011 — are nearing full hearings in their respective chambers. If passed, the law would preempt any local regulation of vacation rentals.

Cindy Montalto also said that ideally rental owners would live next door or within a certain distance of their listing. She recalled frequent instances involving an Airbnb down the street from her inn, at 309 SE 7th St., where loud events with car-blocked driveways and “exotic dancers” disrupted the neighborhood until dawn. Montalto believes it is unfair for the owners of unattended rentals to leave the policing of their properties to neighbors.

The Montaltos bought the house that became the Magnolia Plantation Bed and Breakfast Inn 30 years ago.

“When we got here in ’90, this quickly became more about restoring an old neighborhood than opening a bed-and-breakfast,” Joe Montalto said. Of the four inns in the neighborhood, the Montaltos have been directly involved in opening three of them.

Over the last three decades, the neighborhood has transformed from what Joe described as “a hell hole,” to his beloved neighborhood today.

“Our common thread is the love of this neighborhood,” he said.